From Deathloop, to Ratchet & Clank: Rift Apart to Unpacking, 2021 had a great range of beautiful video games. Here are the Best Games of 2021.
GamesHub 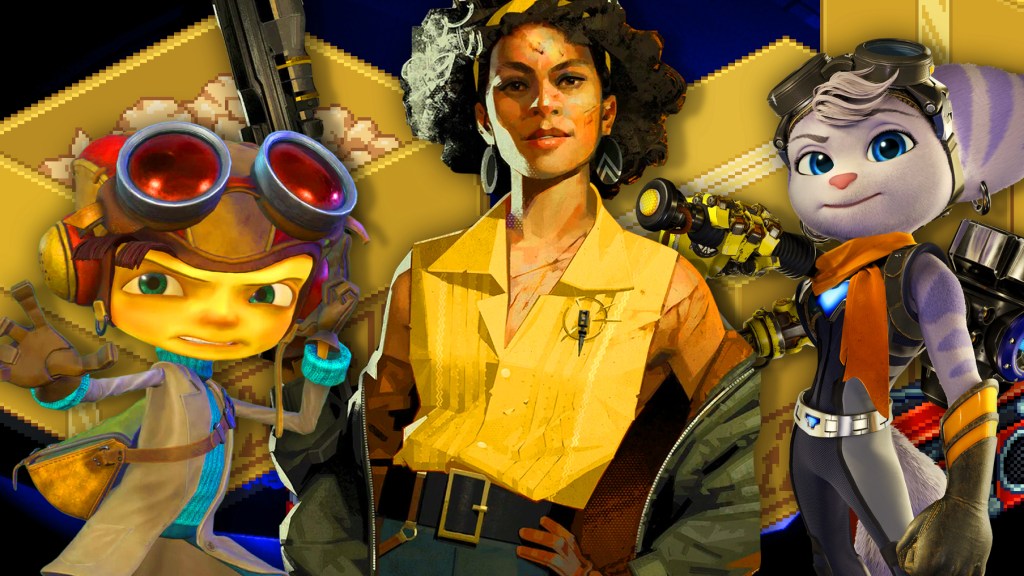 What a year it’s been for video games! After a tumultuous 2020, which cascaded into a tumultuous 2021, there’s some consolation to be taken in seeing game studios overcome, adapt, and continue to put out great work into the world. From creative blockbuster experiences like Deathloop, to technical marvels like Ratchet & Clank: Rift Apart and beautifully intimate experiences like Unpacking – 2021 certainly didn’t have a shortage of excellent games. To celebrate a great year, we took some time to look back on our favourite games, and decided on a collective list of the best games of 2021.

Super Mario 3D World + Bowser’s Fury could’ve easily been a write-off — it was a port of an older Wii U game, with some promised story additions. But instead of a run-off the mill expansion chapter, Nintendo chose to go all-in with Bowser’s Fury by creating a fully-fledged adventure where players could experience a brand new story and explore a mini-open world filled with fresh and interesting challenges.

In many ways, Bowser’s Fury felt inspired by Super Mario Sunshine and Super Mario 64, but in a way that pushed Nintendo’s brand of 3D platforming forward. There were towering, apocalyptic battles against Bowser, challenging Shine tokens to collect, and plenty of secrets to discover. It was huge, ambitious, and an absolute breath of fresh air for the Mario franchise.

A sequel to Bowser’s Fury feels like a logical next step for Nintendo. With fluid, frantic gameplay and plenty of inventive  riffs on the classic Mario formula, it was one of the year’s most welcome surprises. – Leah Williams

Guardians of the Galaxy had everything stacked against it when it launched in 2021, with the shadow of the Marvel Cinematic Universe and the relative failure of Square Enix’s Marvel’s Avengers hanging over it. But despite all odds, Guardians of the Galaxy is a major success, and has escaped every doubter on its path.

With an original and well-written story, a brilliant cast of characters and fantastic performances all around, Guardians of the Galaxy really is an incredible game, and one that shouldn’t be overlooked just because the character designs don’t quite line up with the more-popular film of the same name.

The combat is exciting, the world is beautiful, and there’s every reason to fall in love with this intimate, space-faring adventure. – Leah Williams

Loop Hero‘s core design reminds me of Betrayal at the House on the Hill, a tabletop game I adore. In both games, you begin with a relatively blank playing area, which you populate by playing tiles from a deck, ensuring every round you play is totally unique. While Betrayal is based on pulpy B-grade horror, Loop Hero takes place within a dark, fantasy medieval setting.

Where Loop Hero makes this concept its own is through a rogue-lite structure, and an unfolding story about a universe vanishing right in front of you. With each attempt (of which there will be many) that takes place on a literal looping path, you acquire resources to upgrade your campsite, a safe haven for the few survivors of the universe’s Thanos-snappenning.

All the combat against various goblins, ghouls, and zombies with no conscience takes place automatically, placing the focus firmly on strategically placing tiles to your advantage and managing equipment. This approach to combat makes Loop Hero a fantastic game to play when you can’t commit your full attention – although it’s compelling enough to command it. – Chris Button

Despite coming out at the very beginning of 2021, Hitman 3 hasn’t left our mind. Ever since the sandbox assassination series reinvented itself in 2016 – focusing on a small number of large, elaborate clockwork levels designed to be played multiple times with increasingly more challenging conditions – each new iteration has felt like the series continuing to go from strength to strength.

The memorable highlights include a stage set on the grounds of an English manor, where, if the conditions are right, you can play the part of detective in an Agatha Christie-style whodunnit murder mystery. Another is an ostentatious Berlin rave held in a repurposed nuclear power facility, where the assassination roles are flipped – you have to avoid, identify, and turn the tables on a number of hitmen hunting you down.

Going into each new stage comes with a feeling of excitement, trepidation, and awe. And, developer IO Interactive has continued to support the game with a good amount of bespoke post-launch challenges that force you to look at these levels in new ways.

Inscryption is one of the most haunting experiences of 2021. On its face, it looks like a spooky card game structured around repeated playthroughs. Spend a little bit longer with it, and you’ll uncover some kind of macabre escape room situation in there too. Stick with it for longer and dig a little deeper still, and you might find some things that will confuse you, disturb you, and completely turn your expectations upside down.

It’s a game that you instinctively want to urge people to play without knowing anything about it, even if they have no interest in card games whatsoever. The card mechanics introduce things at an approachable pace, remains compelling throughout, and features mechanics that help steer you towards success eventually. That’s all very helpful, because the real drawcard here is the overarching mystery of what the hell Inscryption actually is.

Ratchet & Clank: Rift Apart was one of the first big games to show off the power of the PlayStation 5. From its opening moments, it was an absolute stunner. Rockets burst in brilliant shades of pink and green. Ratchet’s fur blew in the breeze, and you could watch every fibre dance. You could see every texture reflected on Clank’s metal body.

But beyond the game’s phenomenal graphics and awe-inspiring worlds, it also featured a heartfelt, well-told story about friendship across galaxies, and the value of sharing your feelings with your peers.

Rift Apart really is an incredible sequel, and one that showcases the power and beauty of the Ratchet & Clank franchise. It might be about creatures wandering through space, but it’s also an excellent story about friendship and ‘human’ connection. – Leah Williams

Trapped within an ancient Roman settlement beholden to a curse where everyone is punished for the sin of one, Melbourne-made The Forgotten City challenges you to investigate and prevent society’s downfall. Originating as a mod of The Elder Scrolls V: Skyrim, the transition to a game in its own right is a masterful example of interactive storytelling, with its time-looping concept melding perfectly with dialogue-driven gameplay, where words wield more power than weapons – most of the time.

Many of my fondest video game memories come from getting hooked on a story to the point of staying up way too late with my partner, desperate to see the game’s conclusion. Last year, 13 Sentinels: Aegis Rim was our late-night obsession. This year’s story we couldn’t wait to piece together, sleep be damned, was The Forgotten City. Not only does it generate thought-provoking commentary on topics such as philosophy, morality and history, but it also does so in an unpretentious and non-preachy manner.

I love it when game design and narrative join cohesively, which is why The Forgotten City is one of my favourite games of 2021. – Chris Button

The hype around the long-awaited Psychonauts 2 inspired me to play the original, and I was impressed with how well the original 3D platformer held up, in particular its willingness to address themes of mental health.

Psychonauts 2 is a wonderful sequel that improves on the original in every tangible way. It’s filled with such clever and beautiful level design – my word, the Psi-King level is phenomenal – plus consistently strong wit and humour throughout.

It’s not just a great 3D platformer, either: it’s an empathetic celebration of what makes us unique, treating its characters with such love and care in examinations of their psyches. Positive representation of mental health and illness is deeply important to me, something I’m delighted Psychonauts 2 does incredibly well.

Although I may be a newcomer to Razputin’s psychic shenanigans, I’m now an unabashed fan. Fun gameplay, eye-popping art direction, and a touching story with such lovely characters make Psychonauts 2 my favourite game of 2021. – Chris Button

Talk to any fan of Dishonored or Prey, and they’ll tell you how brilliant the games of Arkane Studios is. They’ve been dedicated to evolving the genre of the immersive sim, games that focus on building a suite of interconnected world systems that, essentially, allow players to approach any one objective in a multitude of creative ways.

Deathloop is a wonderful refinement of that philosophy. A time-looping world and narrative that asks you to repeat the same objectives and visit the same intricately detailed locations, again and again, encouraging you to discover new methods of accomplishing things each time.

The game puts a focus on making failure a useful and entertaining activity. Did you fumble a stealthy approach? That’s okay. Deathloop encourages you to roll with the punches and makes improvisation and switching between playstyles an exciting activity. Don’t worry if it all goes to hell – you can try again next time, when you’re better equipped with additional knowledge about how the world works. Internalising the world and building mastery over this playground is a satisfying exercise.

It doesn’t hurt that Deathloop’s scenario and aesthetic design is incredible, a stylish take on the 60s that is both grounded and surreal enough to stand out on its own, filled with endearing characters. Smart, stylish, and full of charisma, Deathloop is one of the best games of 2021. – Edmond Tran

Unpacking is a treat of a game that explores a dense narrative with no traditional storytelling tools to speak of. Rather than focusing on the ‘telling’, Unpacking is all about the ‘show’ as you literally unpack the life of a mysterious figure. Each object has been carefully thought of, as has its placement in the game’s world. There’s a layer of care here that makes the game sing, and it’s why Unpacking is one of the most unique games of 2021.

It’s a relaxing game, it’s a wholesome game, and at times it depicts sadness in ways that are rarely explored in traditional media. It’s a game that understands the connected nature of human existence, and how ‘things’ can come to define people in strange and personal ways. As a look at the modern human experience, Unpacking is brilliant in every way. – Leah Williams