The Best Australian Games of 2021 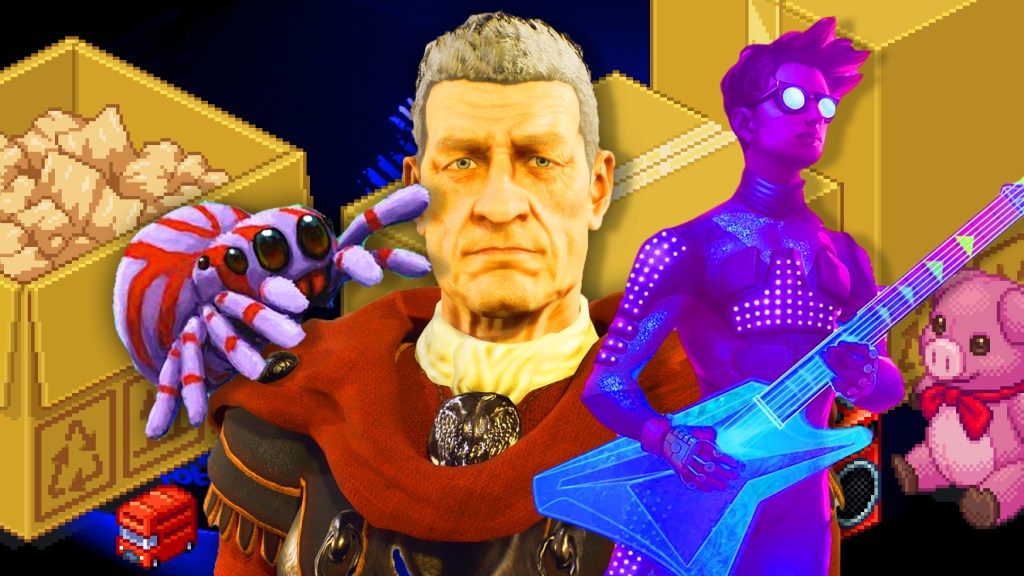 The Australian game development industry has produced some absolutely fantastic stuff in the past year, which made our job of picking five of our favourite titles a lot more difficult than you’d think. But what a great variety we’ve ended up with – games with fantastic gameplay, some with unprecedented style, and many that show off top-tier excellence in game narrative. These are what we consider the Best Australian Games of 2021.

Between Exo One and Webbed, Australian games really managed to nail some amazing feeling movement mechanics this year. Webbed in particular continued to stick out in my mind because its one neat trick was so multifaceted, so integral to many parts of the game, and just felt so good to do.

As a peacock spider in Webbed, your ability to shoot and spin webs at will never ceases to be entertaining or useful. You can use it to attach onto surfaces and swing through the levels at speed, of course. But the best part is how the freeform nature of the game allows you to get creative with the webs when it comes time to solving puzzles. Create a bridge from one point to another! Build your own elaborate web to get to tricky places! Use your webs to connect two items and let physics and momentum solve your problems for you!

It’s amazing how well done these web mechanics are, and how satisfying they are to use. The elasticity of the webs gives them a satisfying bounce, whether you’re swinging, weaving, or landing on one. Walking across webs with your tiny little spider legs is accompanied by a wonderfully playful bassline, and oh – you can also shoot lasers and ride a skateboard. Webbed is so playful in nature, and so joyous to play. It’ll bring a smile to your face – Edmond Tran

I feel incredibly called out by The Artful Escape. As a twenty-something white guy who loves the rock odyssey approach to music favoured by the likes of Queen, Pink Floyd, and Muse, I totally vibe with protagonist Francis Vendetti’s grand desires to be an epic rock god.

Other than finding The Artful Escape deeply relatable on a delusions-of-grandeur level, I was smitten with its psychedelic art direction, filled with vibrant cosmic colour palettes in every scene, made even better by the fact there was a dedicated shred button. I made that guitar wail at every opportunity.

When I play games, I’m drawn to those that evoke strong sensations, which is why I’m convinced The Artful Escape was made specifically for me. There’s not much traditional ‘gameplay’ to speak of here, other than occasional moments of rhythm memory, and moving from left to right. Let me tell you that fact doesn’t matter one iota. The Artful Escape‘s commitment to being true to its rock vision is awe-inspiring.

Is The Artful Escape a little self-indulgent? Sure, but that’s what rock’s all about, baby. – Chris Button

The Oregon Trail remake was one of 2021’s most surprising titles, because for a long time it felt like the original game was too dated to be enjoyable in the modern era. But the Australian developers at Gameloft in Brisbane did a fantastic job reinvigorating this title for a modern audience by, among other things, shifting the narrative to include Native American characters.

The mechanics of the game remain the same — it’s a strategy-heavy management sim, and players still have to fight for survival through a harsh trail filled with dangers — but the development’s consultation with Native American academics and historians means the journey is far more respectful and historically accurate than the original version of the game.

A fresh lick of paint with stylish nods to its vintage computer origins also means The Oregon Trail is now more engaging than it’s been for decades. You’ll still have to spend your time contending with cholera and dysentery, but the choices and puzzles you face are more dynamic, interesting and impactful this go around. – Leah J. Williams

Trapped within an ancient Roman settlement beholden to a curse where everyone is punished for the sin of one, Melbourne-made The Forgotten City challenges you to investigate and prevent society’s downfall. Originating as a mod for The Elder Scrolls V: Skyrim, the transition to a game in its own right is a masterful example of interactive storytelling, with its time-looping concept melding perfectly with dialogue-driven gameplay where words wield more power than weapons.

Many of my fondest video game memories come from getting hooked on a story, to the point of staying up way too late with my partner, desperate to see the game’s conclusion. Last year, 13 Sentinels: Aegis Rim was our late-night obsession. This year’s story we couldn’t wait to piece together, sleep be damned, was The Forgotten City. Not only does it generate thought-provoking commentary on topics such as philosophy, morality and history, but it also does so in an unpretentious manner.

I love it when game design and narrative join cohesively, which is why The Forgotten City is one of my favourite games of 2021. – Chris Button

When you see people talking about the virtues of Unpacking, you’ll hear about the clever ways it manages to tell a story, full of emotional twists and turns, through the act of unpacking boxes and putting away a person’s possessions. If you’ve played it, you’ll likely relate. If you haven’t, believe me – it really is that strong.

The high degree of thought and surgically-precise design decisions made to create the game’s understated, powerful moments is masterful.

But something should be said for just how well-executed the actual motions of unpacking in Unpacking are too — the utilitarian but attractive pixel art, the phenomenal sound design, and all the subtle touches that make this abstracted version of unpacking feel so real (despite the abstraction), and so good to do (despite the mundanity).

The rustle of paper, the clink of the drinking glasses, the sloshing of the hot water bottle, and the satisfying thuds when you place all those objects. The sight of perfectly-lined sock drawers or neatly stacked plates is a great joy. When the demo for Unpacking became available long ago, I played it repeatedly. It spoke to my neat and tidy nature. It gave me great satisfaction. It put me in a zen state.

Most significantly though, I feel like it’s one of the most relatable video games in recent memory, and there’s a lot of power in that. Broader narrative aside, it’s wonderful how Unpacking can tickle those personal emotional centres in your brain by simply pulling something from a box. It might be a DVD or a GameCube game with art that is just evocative enough to make you recall the time you brought those things with you in a move.

The act of having way too much stuff to fit neatly in the space you’re given might be reminiscent of similar stress in your life. The opportunity to organise a fresh set of kitchen or bathroom drawers is a chance for your own kind of domestic creative style and expression.

There is nothing else out there quite like Unpacking. And even without a point of comparison, Unpacking so clearly excels in every part of its design. It is simply one of the most cohesive, delightful, heartwarming, and memorable games of 2021. – Edmond Tran