Against the odds, Marvel's Guardians of the Galaxy escapes the shadow of the film to become its own fun entity.
Leah J. Williams 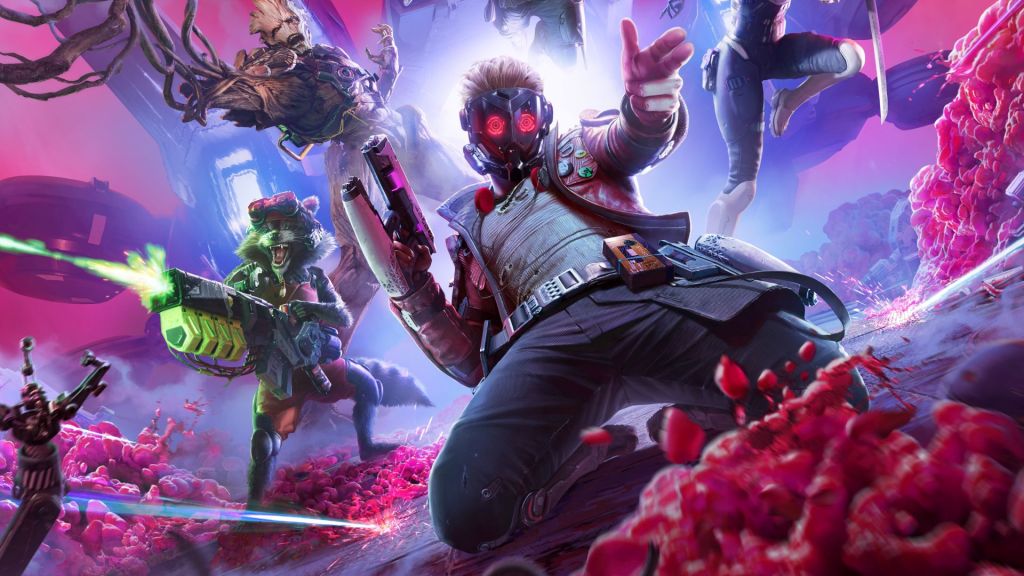 When Guardians of the Galaxy first hit cinemas, moviegoers didn’t know what to expect of the quip-laden, neon-soaked film. The team were relatively unknown in 2014 — and even comic fans were unfamiliar with their antics. In 2021, it’s an entirely different story. Guardians of the Galaxy is now a household name. Baby Groot merchandise litters the halls of Zing and EB Games. Chris Pratt’s Star-Lord is a leading man, having starred in one of the biggest movies of all time.

It’s for this reason Eidos-Montréal’s Guardians of the Galaxy game had an uphill battle ahead of its launch.

Like Marvel’s Avengers before it, it had to overcome a unique struggle: shedding its ‘movie tie-in’ roots to become something engaging and exciting without the familiar likenesses of Chris Pratt and Zoe Saldana to buoy the action. While the game was never marketed as a tie-in, the Guardians of the Galaxy name now comes with expectations.

Expectations that Marvel’s Guardians of the Galaxy manages to shatter within the first hour of gameplay.

Between witty banter, a banging soundtrack, breakneck action and quieter character moments, the game manages to successfully carve out its own identity beyond the MCU Guardians franchise. While it borrows many of the same elements that made the team famous, ie. classic 70s and 80s rock hits and neon hues, it also manages to tell an original, twist-filled story that’ll keep you on board for the ride.

Rather than rehashing the team’s origin story, which comic and movie fans will already be familiar with, the game begins with the clever choice to plunge fans right into a planet-hopping heist filled with bright pink space goo danger and mysterious, globular creatures.

A brief flashback does introduce players to the game’s version of Peter Quill (who is far more inspired by glam-rock bands of the 80s this go around), but the action does most of the talking here — and it’s an effective tactic to introduce the rest of the game’s vibrant cast.

As you get lost in a deep space saga filled with strange mutant llamas and otherworldly beings with no distinct form, you’ll learn more about your crew in how they perform under pressure. When presented with a choice, Drax will prefer to brute-force his way through environmental puzzles by crashing through barriers or throwing objects (including teammate, Rocket). Assassin Gamora prefers finesse, engineer Rocket loves exploding things, and elemental Groot just wants to help.

All their skills come in handy during the game’s combat, which is a familiar mix of third person running-and-gunning and team-combo tactics. There’s nothing particularly new in these mechanics — you’ll basically be running around shooting things and firing off ‘special moves’ between ability cool downs — but using each Guardian to pull off powerful, scenery-destroying moves is satisfying.

There’s also a flow and a cadence to each battle that makes levelling up and discovering new abilities worthwhile, even if you just stick with the (admittedly very good) starting tactics of gunning and jumping to avoid heavy enemy attacks.

No matter how you tackle fights, your relationship with the Guardians will be key to your survival as you traipse through increasingly hostile worlds. You’ll need to spend time with each of them to unlock the game’s potential and understand more about this take on the characters.

In snippets of dialogue and biting banter between combat and action set pieces, you’ll learn that Thanos has already been killed by Drax. You’ll learn that Gamora is trying to escape her past and deal with depression in her own way. Rocket and Groot tend to keep more to themselves, but over the course of the game you’ll soften them up too, and bring your team closer together.

It’s these quieter moments where the game really shines.

As you adventure through great halls, pink space rocks and cavernous dungeons, you’ll occasionally find unique prompts to settle by a Guardian and hear more of their story. Not only does this dialogue encourage exploration, it also reveals more about the game’s deep lore.

One moment with Drax is particularly memorable — and while its content veers into spoiler territory, suffice to say it’s a poignant and memorable break as Peter joins Drax by a monument known as ‘the end of the galaxy’.

As the story continues throwing the Guardians from one corner of space to the next, it’s nice to sit down and breathe with these deeper character interactions. They’re the lifeblood of the game and part of the reason why the story is so compelling even without the context of the movie.

While the Guardians of the Galaxy film has obviously inspired the game, Eidos-Montréal’s interpretation arguably does more with dialogue and character quirks to make the team seem more human, relatable and interesting. Whether it’s somebody continuously leaving the Milano fridge door open or the way Rocket and Peter clash, the game uses smaller moments to make every character feel real.

The Peter Quill of Marvel’s Guardians of the Galaxy is a far more sympathetic character than his movie counterpart and has a clear love and admiration for his team despite the constant bickering. Drax is also quieter and more introspective, as is Gamora. Rocket is a bit more prickly, but his character development over the course of the game balances out his ruder moments.

This is a team going through an unfathomable, planet-faring struggle together. They bicker and fight, but even through various kidnappings, cult takeovers and city-wide destructions, they lean on each other for support. The strength of these relationships carry the game and help it carve out its own identity away from the multi-movie madness of the MCU.

While you will need to shrug off your preconceived ideas of who the Guardians are to fully immerse yourself in all the action, Marvel’s Guardians of the Galaxy does a bang up job showing you why this version of the Guardians story is worth telling.

The PlayStation 5 version of Guardians of the Galaxy was provided for the purposes of this review.