Making a film is already difficult enough and it’s even more of an uphill struggle for a video game film adaptation to tick all the boxes.
Alexander Pan

The Witcher is a small-screen winner. Image: Netflix.

Three decades is a long time to try and get something right. Yet despite millions of dollars, piles of scripts, a revolving door of passionate talent, and more than 40 attempts (and counting), Hollywood just can’t seem to figure out the secret of how to make a film adaptation of a video game good.

There are several reasons why the jump from video games to the big screen is so difficult. There are studio bigwigs meddling with the creative process, not enough budget, the struggle to condense hours of video game material into a cohesive 110-page screenplay, the even bigger struggle to translate the active video gaming user experience to a passive film-watching user experience, getting the character designs completely wrong (*cough* ugly Sonic *cough*), and filmmakers who completely misunderstand what made the original game so special.

Making a film is already difficult enough, and it’s even more of an uphill struggle for a video game film adaptation to tick all the boxes.

As a result, we end up with, well, what we’ve been getting since 1993’s Super Mario Bros. Just take one look at Rotten Tomatoes and/or Metacritic to see how each video game film has fared critically, and you’ll need a detailed minimap to find a review that’s nicer than: ‘[the] creators have the courage to always take themselves seriously, even when they’re working with material that sounds fundamentally silly,’ (A review of Assassin’s Creed (2016) via The Verge).

But it seems like we’ve hit a turning point where it seems like things are finally – finally – trending upward and the whole ‘video game adaptations suck’ stigma is slowly going away. And funnily enough, it was television that cracked the code before film did.

At the same time we were getting so-so films like Assassin’s Creed, Tomb Raider (the reboot, not the Angelina Jolie films), Monster Hunter, Sonic The Hedgehog, and Uncharted, we’ve seen the release of several critically well-received television adaptations of popular video game franchises, such as Arcane, Cyberpunk Edgerunners, The Witcher, and Castlevania – all Netflix adaptations.

The big question here is: why are television series adaptations of video games so much better than film? In short, as hinted at already, there’s too much source material for a film script, alongside the hurdle of translating an active user experience to a passive one.

Films are meant to be brisk and broken down cleanly into three acts, hence why screenplays are only about 110 pages (one page roughly correlates to one minute of screentime) and are arguably the most minimalistic form of writing that doesn’t involve tweeting funny one-liners. But video game scripts run upwards of several thousand pages and are stuffed with so much detail that you’ll get a permanent ‘you are over-encumbered’ warning.

As such, adapting a several-thousand-page video game script to a quality 110-page three-act screenplay is nigh impossible when the film medium is operating within its own fundamental limitations. There’s just no way to fit everything in and something important will inevitably be cut out, whether it’s character work, storylines, or lore.

The only way film adaptations of video games will work is if there are several instalments, but there’s almost no way that’ll ever happen, since it requires audiences to fully buy into a first film that is essentially all set up for the sequels and for each film to make ridiculous amounts of money at the box office. The only entity capable of doing anything remotely close to this at the moment is Marvel, and even they aren’t completely immune to creative issues and diminishing financial returns.

The inevitable culling of important elements in a video game script is why we have film adaptations that have great world-building, but subpar characters (like Warcraft, Assassin’s Creed, and Prince of Persia) or great characters playing around in a vanilla universe (like Sonic or Tomb Raider). Or sometimes we have both, like the 2021 Mortal Kombat adaptation, Monster Hunter, and Doom.

But with television, the limitations of the film medium are no longer as pronounced. With around 10 or so hour-long episodes per season to play with (that’s about 600 pages of script), there’s far more creative freedom and runtime leeway to properly adapt the important aspects of the source material with less compromise.

You are an active participant when you play a video game and you are in control of everything. The whole experience is of your own making, you shape your own narrative, and you form a connection to the character who you are essentially ‘playing’ as.

Television and film puts you into a more passive role, where you relinquish that level of control and instead you’re being asked to follow a protagonist who is essentially an audience surrogate. This requires the protagonist to not only be fleshed out and well-characterised, so that viewers can not only root for them, but to also live up to the preconceived notion of what fans think the protagonist ‘should be’ based on their experience.

That’s a difficult line to walk, but it is far better realised in television and film due to the expanded scope afforded by lengthier runtimes and scripts.

This is not to say television is the foolproof answer to a great video game adaptation, in every single circumstance. But it is a medium that gives creators of video game adaptations a better fighting chance at making something without compromising on what made the source material so special.

With so many more television projects in the works (ranging from Disco Elysium and Life Is Strange to God of War and Fallout), it remains to be seen whether the high bar set in recent years can be maintained – but it’s looking pretty promising.

Here’s a taster of just some of the video game screen adaptations currently in the works:

Alexander Pan is a former journalist and editor who got out, yet found himself inexplicably drawn back into the world of cobbling sentences about video games. You can follow him on Twitter @alexandervpan 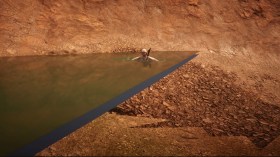 ACMI's Out of Bounds exhibit explores the literal boundaries of play

The Out of Bounds installation shows that ACMI continues to adventure beyond the limits of what video game exhibits can,…