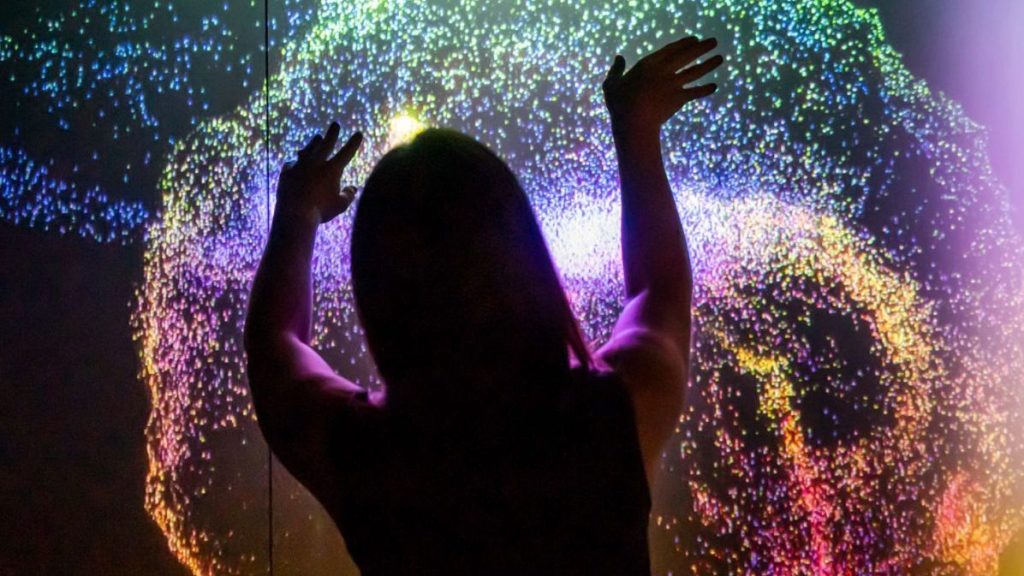 Tetsuya Mizuguchi is the internationally recognised games designer who brought a revolution to gaming at the turn of the new millennium with his creation Rez. Rez (2001) is a richly textured game that draws on theories of synesthesia to submerge players in layered sensorial landscapes. It proved to be a landmark moment for the industry, and for experimental games, with its multi-layered, artistic approach. Twenty years on, Mizuguchi continues to explore ideas of deeply-felt sensorial effects onscreen. His latest experiment is by way of the international exhibition Virtual Realms: Videogames Transformed, which, in many ways seeks to bridge divides between the gaming community and general public audiences.

Virtual Realms co-curator Patrick Moran said the exhibition marks an important moment to recognise the artistic talents of games designers that have long been overlooked.

‘We have generations of gamers now,’ Moran explained. ‘And I think the question of whether games are something to be taken seriously as an art form is somewhat settled now in that they are appreciated as a new art form and a digital medium.’

Curators Moran and Mizuguchi have therefore set out to showcase game designers as leading digital creatives of our era.

‘They are some of the most important people making art at the moment,’ Moran said, adding that, ‘you can see that [demonstrated] on a dollars basis and on cultural impact basis.’

With vast cultural reach and strong market share (estimates say the games market generated revenues of US $218.8 billion in 2021, compared to the global art market, which made approximately US $65 billion), it’s clear the gaming industry has a robust future. Yet Moran believes there is good reason to allow designers more opportunities to make work that pushes beyond their immediate gaming context and penetrates further into the contemporary art world.

‘We see a lot of art institutions around the world who are working with media artists who use elements of gaming in their work – either the technology or the other interactive elements,’ Moran commented.

‘So Virtual Realms set out to answer the question: ‘what if we put video game designers inside the gallery context? How could they reimagine the world of gaming for a more collective audience and with that kind of spatial format for their work?’

What happens when gamers enter the gallery

In allowing game developers such as Tequila Works, Media Molecule and Mizuguchi’s own company, Enhance, to bring their bold creative visions to large-scale gallery spaces, Virtual Realms feels like a first.

One prominent example of how transformative the exhibit can be is Irish game designer David OReilly’s installation, made in collaboration with media design company onedotzero. OReilly’s immersive piece Eye (2021) draws on ideas from his 2017 game Everything to celebrate video games’ infinite potential to expand the imagination.

Part of OReilly’s outlook for this work was to reflect on Buddhist concepts of the world’s inter-connectedness. Yet the final work – which presents no less than nine hours of animated objects spiralling in mesmerising fashion before one’s eyes – feels more like a turbo-charged journey through the world as directed by chaos theory. It’s a beautiful and strangely unsettling experience which pulses with the speed and complexity of life in all its forms.

Also intriguing is the work WALL (2021), by Tokyo-based game developers Kojima Productions, made in collaboration with media designers The Mill. In this work, large animated screens are designed as the two sides of the same wall, which visitors experience via two separate darkened rooms where they interact with the moving-image divide.

On each side of the wall, visitors see life on micro-scales – as one screen beams with biological cells up-close and the other glistens with atomised galactic energy particles. The viewers’ presence in each room sparks wondrous movement of the microscopic life forms on both screens, hinting that while technology has separated us in some ways, in other ways, it has sparked connections we never thought possible.

Moran said the idea that video games are mediums through which we build strong social ties has been an important part of Virtual Realms’ curatorial vision.

‘Take Kojima Productions’ [2019 video game] Death Stranding,’ he said  – a game where players are on Earth after a cataclysmic event inhabited by destructive creatures and must work together to put the pieces back together. ‘Those worlds are so vivid and incredibly compelling, but what keeps people in the space is the way you connect with other players indirectly. You never see them, but you are building the world together.’

‘That’s what we wanted to capture with the Connections [WALL] piece,’ he continued. ‘We wanted to show how these games might have these incredible Hollywood-level production values, but ultimately, it’s being used to communicate profound ideas about our shared humanity.’

In applying games designers’ visions to large-scale physical spaces, Moran has been pleased to see their powerfully human effects on audiences: ‘We really wanted to push that social aspect of games into a multi-generational experience that you get when you go to a museum or a gallery, where people are able to share these worlds or interactions and think about games very differently,’ Moran concluded.

Virtual Realms: Videogames transformed is exhibiting at the WA Museum Boola Bardip until 22 May 2022. Tickets are available via the website.

ArtsHub's Arts Feature Writer Jo Pickup is based in Perth. An arts writer and manager, she has worked as a journalist and broadcaster for media such as the ABC, RTRFM and The West Australian newspaper, contributing media content and commentary on art, culture and design. She has also worked for arts organisations such as Fremantle Arts Centre, STRUT dance, and the Aboriginal Arts Centre Hub of WA, as well as being a sessional arts lecturer at The Western Australian Academy of Performing Arts (WAAPA).