Ubisoft has teamed up with blockchain game The Sandbox to create Rabbids 'experiences' in the metaverse.
Leah J. Williams 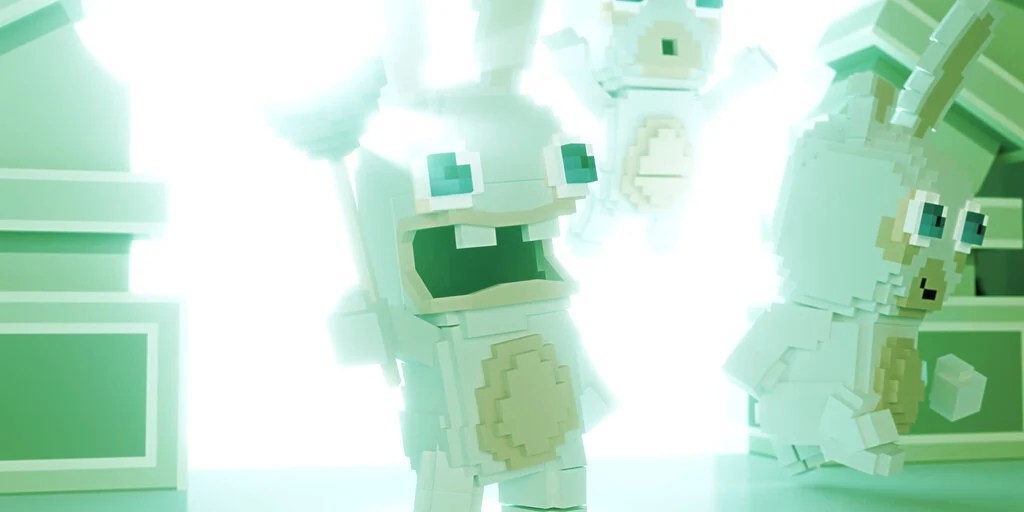 After the disastrous launch of Ghost Recon Breakpoint NFTs, Ubisoft is digging itself a deeper hole by teaming up with blockchain game The Sandbox to bring its infamous Rabbids to the virtual real estate metaverse. Here, players will be able to ‘create their own experiences with the Rabbids franchise’, for some reason. It’s a collaboration that has only sunk Ubisoft’s star even further as fans continue to rail against the company for investing in harmful, speculative technologies.

The Sandbox is a ‘game’ that allows players to buy virtual property, exist within an MMO-style world, and monetise every part of their gameplay. Money earned in-game – on the blockchain – can be invested in cryptocurrency, or used to purchase NFTs. Think Minecraft and Second Life, but extremely damaging to the environment, and completely unnecessary.

And also, the Rabbids are there.

In a time when ‘NFTs‘ and ‘the metaverse‘ are the new buzzwords for companies to seem trendy and innovative – despite these concepts being recycled from the early 2000s – every major player in the tech market seems to want a piece of the ‘Web3’ pie.

It’s led to an explosion in 3D virtual worlds claiming to be money-making metaverses where players can play-to-earn – turning their gaming into real life profit. But what many of these modern metaverses fail at is actually being fun, or being games at all.

Instead, their focus is largely on exploitative profit making, and fleecing speculative tech like NFTs to people with expendable income.

Adding the Rabbids into The Sandbox feels like a very strange choice. Not only does it garner the ire of Ubisoft’s audience, it also appeals to such a niche segment of the market that it’s hard to see why the decision was made in the first place.

The Rabbids originate from the Rayman franchise – and they’ve been hated ever since they made their debut. Largely, this is because they’re designed to be obnoxious. They snort and shout, and blow raspberries. They’re pretty ugly, and have no redeeming features. More to the point, they’ve also replaced Rayman in his own franchise, making old school Ubisoft fans understandably bitter.

While they briefly redeemed themselves in the excellent Mario + Rabbids crossover game, which featured hilarious writing and genuinely great characters, it seems the Rabbids are destined to fall back out of favour as fans voice outrage at Ubisoft for agreeing to allow them into a blockchain-based games despite the environmental concerns, and the potential for these games to become money-laundering, player-exploiting scams.

Despite this outcry, it appears Ubisoft is continuing to double down on its support for blockchain gaming and NFTs. The Rabbids are just another in a long line of concerning choices at the company – and there’s likely more to come in the future.