The metaverse is not new, and it won’t change the world

As Facebook and Unity double down on the concept of the 'metaverse' they fail to realise something simple: that the metaverse is doomed to failure.
Leah J. Williams 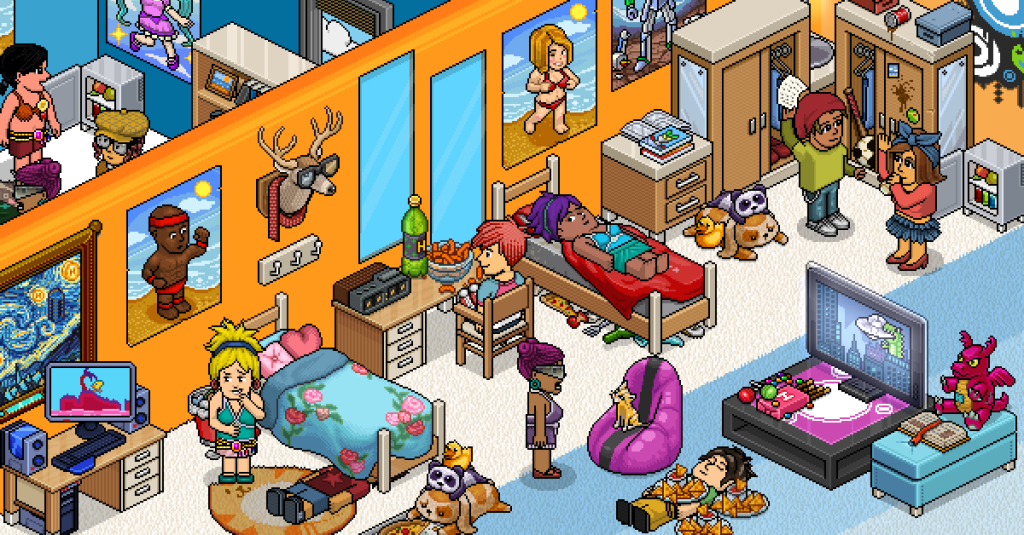 Everything old eventually becomes new again. Fashions go in and out of style. Franchises are rebooted and reborn. And like clockwork, the concept of building a new ‘metaverse’ returns every few years as tech giants look to new avenues for profit. But like Habbo Hotel, Second Life, PlayStation Home and IMVU before them, the modern metaverses are doomed to a slow failure.

Even as companies like Facebook and Unity pour resources into developing new virtual worlds to play in and connect with, they fail to understand that metaverses have had their time in the sun, and didn’t survive the burn.

In the early 2000s, the metaverse was an engaging, fresh concept. Young kids were discovering the internet for the first time, and finding new ways to communicate in messenger apps like MSN, or in virtual worlds like Habbo Hotel and IMVU.

These worlds allowed players to adopt new online identities via avatars that represented their best selves. You could decorate these avatars in fun clothes and hairstyles, or pay a membership fee for more premium, pretty accessories. In each game, players could explore digital spaces, make new friends, and connect when real-life connection was absent.

Read: God, give me a body: How virtual events and museums can be better

It was in this same time period that more experience-based online games popped up, including the uproariously-popular Second Life, which launched in 2003 with the vision of allowing players a whole new, virtual life to lead, one where the possibilities were endless.

These were the ‘proto’ metaverses.

In Second Life, players could explore a wide-open world, join social events, buy and trade virtual property, start romantic relationships, and even have sex. It offered a mature alternative to real life, and for a small moment, it was the social zeitgeist.

Second Life featured on the cover of Business Insider, and brands like Rebook, Dell and American Apparel launched high-profile storefronts in the game. Global news agency Reuters even set up a virtual bureau there, and appointed a chief to watch over the in-game goings-on. Academics poured over it.

After a sudden boom came a short, sharp stop as the novelty of exploring a virtual world wore off. Just a handful of years after launch, Second Life was old hat. In 2021, it remains online — but new visitors report empty boulevards and ‘zero people’ around. Without the novelty, people became disengaged with Second Life and the freedom it promised.

While it maintains a quiet, steady fanbase, the game’s popularity has waned so much it’s barely remembered, even by people who spent long hours playing in the early 2000s.

In a recent interview with Axios, Philip Rosedale, who oversaw the creation of the game at Linden Lab, acknowledged the slow decline of Second Life with the admission that the metaverse isn’t a concept that works for most people.

‘I think what we’ve learned — and somewhat with some sadness, given the work that I’ve done, I would have to agree — is that [the metaverse] is not for everybody,’ Rosedale said. ‘Maybe it’s never for everybody.’

Rosedale believes the eventual ‘fizzling out’ of Second Life was down to a misunderstanding on the development side of what made online spaces fun, and an incorrect belief that the metaverse would encourage everyone to spend ‘increasingly large fractions of [their] lives in a virtual world.’

It was founded on principles shared by the modern metaverse: that Second Life would be a place where people could come together in an online world to treat each other well, and in a positive fashion. In doing so, it would become a ‘better’ and more exciting version of the real world.

This idealised vision never came about — and the modern metaverse is just as likely to be plagued by the same issues.

The modern metaverse is an idealised vision

Facebook, in its rebrand to Meta, is seeking to reinvent the concept of the metaverse, labelling it as the ‘next evolution of social technology.’

While exact plans for the company’s interpretation of the metaverse are up in the air, a fresh website hub doubles down on the commitment to a new metaverse that allows greater engagement via 3D spaces, where everyone can ‘socialise, learn, collaborate and play in ways that go beyond what we can imagine.’

It’s likely this version of the metaverse will also incorporate virtual reality, given Facebook’s investment in Oculus VR devices.

Technology company Unity also recently claim its stake in the metaverse race, purchasing visual effects company Weta Digital for US $1.625 billion ($2.2 billion), with the intention of using its propriety tools to ‘to unlock the full potential of the metaverse.’

While the spin on both these ideas is positive and hopeful, it also feels fairly naive, given the history of metaverses, and the nature of the internet.

Learnings from the past reveal trolling, jealousy

In 2016, Time’s Joel Stein wrote that we were ‘losing the Internet to a culture of hate‘.

As a global platform, the Internet has slowly morphed into a tool for self-expression, allowing everyone to share their opinions, passions and excitement online. Conversely, it’s also allowed hatred and jealousy to seep into our daily lives.

Young people are disproportionally impacted by this due to higher levels of engagement with social media, which can prove harmful to self-esteem and body image in some circumstances.

‘Trolls are turning social media and comment boards into a giant locker room in a teen movie, with towel-snapping racial epithets and misogyny,’ Stein wrote in his piece for Time. It’s a sentiment that has long plagued the internet, and one that’s had a hand in transforming the metaverses of the past.

Online space Habbo Hotel has become infamous for being subject to trolls, with massive raids across the platform frequently flooding chats with obscenities and prejudices in the mid-2000s. Beyond raids, the platform also become infamous for featuring cybersex in dark corners, with young kids first discovering sexual explicitness, insecurity and shame in the proto-metaverse.

IMVU also offered similar scenes, as virtual spaces allowed anonymity and freedom for everyone, of all ages — no matter the content on show. While much of this can be considered a failure of parenting, it’s also the nature of the Internet, a nature that users were only starting to understand in the early 2000s.

Rather than being a paradise, these metaverse spaces were something much darker. They allowed cyberbullying to thrive, and perpetuated jealousy and anger. They exposed kids to concepts they weren’t quite ready for.

As the modern idea metaverse treads these same footsteps, it’s likely to make the same mistakes.

The future of communication is in person

The idea of a new social metaverse has thrived over the last two years, thanks to the ongoing impact of the coronavirus pandemic. The more people worked from home and communicated via digital tools, the more the idea of communication warped.

Human connection is a complex thing. It’s emotion and speech, energy, body language, facial tics — all subtleties that avatars, no matter how advanced, can never replicate.

Speaking on the failure of Second Life, Philip Rosedale highlighted a key challenge for everyday users ‘living’ in the metaverse: that they felt discomfort when using a personal avatar, and felt they couldn’t properly communicate with their peers. Rather than acting as an aid, digital tools proved to be a barrier for personable, engaging conversation.

This was felt most strongly as the pandemic forced digital communication to become the norm.

Over Zoom, conversations remain stilted as internet connections require a buffer zone of silence to ensure speakers aren’t overlapping. The neck-up view also limits the potential for meaningful body language, and creates a sense of claustrophobia in a digital space.

While some of these problems are being addressed by the addition of 3D avatars, these open up a whole new range of challenges. Beyond the awkwardness of these virtual bodies, they also evoke the ‘uncanny valley’, a feeling that faces aren’t quite right.

Technology is advancing at a rapid pace, to the point where virtual faces seem more realistic than ever, but every minor twitch or movement that isn’t quite human provokes a sense of unease and discomfort among viewers. Psychologists describe this as a natural reaction, although it’s unclear whether the phenomenon is biological or learned.

Regardless of its origin, the uncanny valley prevents people from fully engaging in a virtual setting, and creates an inherent wariness when interacting on a digital plane.

The digital divide will cut off millions

Beyond these feelings, the ideal version of the modern metaverse also fails to acknowledge that while technology is advancing, it’s not doing so equally.

In Australia and around the world, the digital divide has only become more obvious during the coronavirus pandemic. Unequal access to the internet still leaves millions of Australians without access to a solid connection — and even in areas that are connected internet speeds remain poor to average, with Australia ranking 61st in the world for internet speed as of December 2020.

While the minority of people around the world can’t access the internet, the rose-coloured idea of the modern metaverse fails to acknowledge that in-person communication is still the most important tool, and the only one that’s accessible to everyone. It’s the only one that doesn’t leave disadvantaged or remote people behind.

Boasts about virtual worlds and the ability to auction off digital land may excite few select users, but the promise of virtual worlds will feel empty for most.

We already have a world to connect in. One to thrive in. To meet new people and ‘socialise, learn, collaborate and play’ in. A world that doesn’t rely on immersion via the internet, a tool riddled with maliciousness and aggression.

Despite promises of fresh connections and new ways to communicate, the modern metaverse still appears to be on track to replicate all the mistakes of the past, as everything old somehow becomes new again.

The fundamental concept is broken, and there’s little reason to believe fresh attempts to grow a thriving metaverse will succeed.