Wizards of the Coast has revealed what's in store for Magic: The Gathering and Dungeons & Dragons in the Wizards Presents showcase.
Emily Spindler 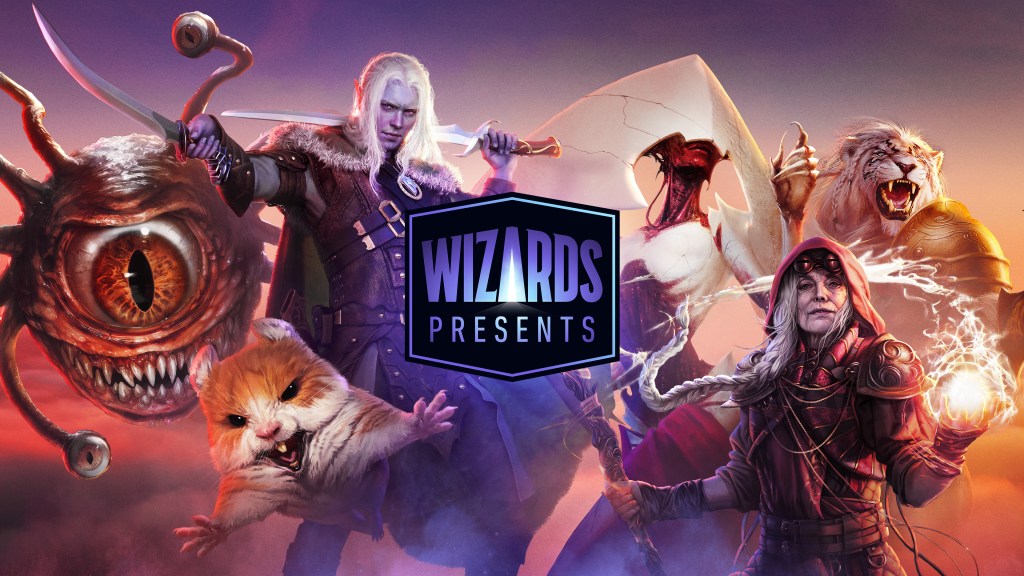 Dungeons & Dragons and Magic: The Gathering fans, rejoice: Wizards of the Coast’s showcase, Wizards Presents, has revealed all of the plans in store for both franchises over the next year and beyond.

Wizards of the Coast is part of Hasbro’s growing $2.1 billion games portfolio, and it looks like there’s no sign of the gaming juggernaut slowing down in the near future if its showcase was anything to go by.

Here are some of the biggest announcements and previews from Wizards Presents 2022:

One of the biggest announcements is the reveal of One D&D, the codename for the next generation of Dungeons & Dragons. The last overhaul of the rules came in the form of fifth edition in 2014, so this has been a long time coming. The update will see a major rules update, but will still be backwards compatible with the wide range of fifth edition modules and materials currently available in the (massive) D&D catalogue.

Playtesting in anticipation for the next evolution of the tabletop RPG will be available via D&D Beyond – and so far, playtest content set to release has some exciting changes to aspects like character backgrounds, race stats and abilities, and feats. One notable addition to the new materials (also known as Unearthed Arcana) is the introduction of a new race, the Ardlings – beings from or with ancestors from the Upper Planes with celestial qualities and animal heads. Wizards of the Coast is set to release further playtest material as they work on the next generation, with the team calling the process ‘a conversation’ with players that will ‘shape the next generation of D&D.’

As part of One D&D, Wizards of the Coast also announced ambitious plans for digital play on D&D Beyond, promising ‘full immersion’ with 3D creation tools to recreate the tabletop experience virtually. So far, previews of what this could look like are promising for those who can’t make it to a physical D&D game but still crave the experience of miniatures on tabletop terrain – and we’re sure to see more previews of this down the track.

Magic the Gathering: Universes Beyond

Dungeons & Dragons isn’t the only franchise getting major announcements, with Magic: The Gathering’s Universes Beyond product line getting plenty of sneak previews of what’s to come. Magic hasn’t shied away from big-name collaborations with other IPs like Fortnite, Street Fighter, and Arcane, so it’s no surprise that Wizards Presents has brought with it more crossovers. Rebecca Aghakhan Shepard, the Director of Global Brand Strategy and Marketing at Hasbro, called the product line ‘our love letter to all of this content that exists that we enjoy.’

Sneak previews of the already-announced Warhammer 40,000 collaboration show some exciting new factions. The Lord Of the Rings is also entering the fray as a crossover set with the TCG, expected to release in the second half of 2023. So far, players have gotten a preview of The Battle of the Pelennor Fields card art in all its glory, spanning across a whopping 18 cards.

Fans can also expect to step into the Tardis with a Doctor Who collaboration to celebrate 60 years of the series – think Secret Lair drops, Commander decks, and collector boosters.

Read: Card grading in Australia: is it worth it?

It looks like the next few years are going to be as jam-packed as ever for Dungeons & Dragons adventure modules and supplementary books as well, if this showcase is anything to go by. Dragonlance: Shadow of the Dragon Queen is set to release on December 6th, and delves into the world of Krynn during the War of the Lance. The team has described the module as a ‘large scale war with an intimate lens,’ with the party fighting against impossible odds against powerful enemies.

Once players have explored Krynn, there are plenty more adventures and world-building to delve into in 2023. Wizards of the Coast unveiled Keys from the Golden Vault, a book of short heist adventures, an expanded campaign of the classic Last Mine of Phandelver and Planescape, a return to a legendary setting that is sure to contain a grand-scale, plane-hopping adventure. Bigby Presents: Glory of the Giants, a companion book focused on giants, and The Book of Many Things, a collection of locations and creatures connected to the oft-mentioned Deck of Many Things round out the release schedule for the year.

Closing out the Wizards Presents showcase, Magic: The Gathering fans got a look at 2023’s exciting upcoming sets, and the story of our favourite planes and planeswalkers continues to expand. Later this year, players will return to the core of Magic’s multiverse in Dominaria United in September – the first of four sets focused on the Dominarian and Phyrexian conflict. Brothers’ War, releasing in November, Phyrexia: All Will Be One, and March of the Machine conclude the major story arc, with March of the Machine: The Aftermath tying up loose ends and exploring the state of the multiverse after the events of the previous sets.

Wilds of Eldraine follows on in the second half of 2023, returning to the classic fairytale setting last explored in 2019. Magic is ending 2023 with a bang with Lost Caverns of Ixalan and is bound to include plenty of pirates and dinosaurs (and with some luck, an appearance from Huatli and her new girlfriend).

Overall, Wizards Presents has dropped plenty of big announcements and release dates, and it looks like TTRPG and TCG players are in for a busy eighteen months ahead between these two franchises alone. With reportedly more than 50 million players apiece for D&D and Magic, Wizards of the Coast looks set to continue their exponential growth in fans and sales well beyond the next year.