The 10 best Kingdom Hearts worlds, and why they’re so special

Kingdom Hearts is home to many gorgeous, Disney-inspired worlds – but there are some that outshine the rest.
Leah J. Williams 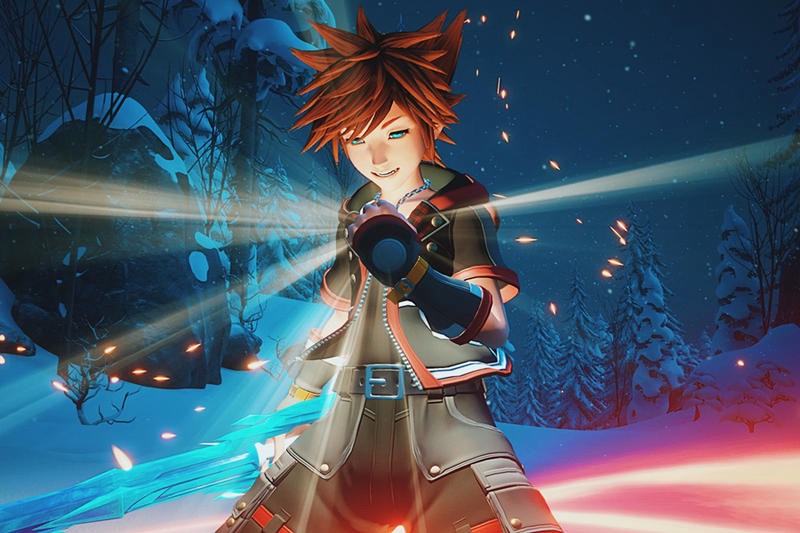 The Kingdom Hearts series is filled with gorgeous and inspired Disney-themed worlds that pull players all the way from Neverland to the creepy haunts of Halloween Town – but not all worlds are created equal. As we head towards the hype cycle for the newly-announced Kingdom Hearts 4, let’s take a look at the best Kingdom Hearts worlds of all time, and why they should return in the upcoming sequel.

It’s time to dive into The Grid, take a trip down the Timeless River, and get lost in the waters of Atlantica as we rank the best Kingdom Hearts worlds around.

Atlantica (from The Little Mermaid) is one of the first worlds players discover in Kingdom Hearts – and it’s an absolute delight for so many reasons. To start with, you can only explore this world as a mermaid, with Sora’s companions Donald Duck and Goofy similarly taking on deep sea forms (an octopus and a turtle) during the adventure. In mermaid form, Sora gains a whole new means to attack enemies, and is even able to take part in rhythm-based singing mini-games.

The ocean here is gorgeous and colourful, and features countless enemies that can’t be found in the overworld, making the entire trip a unique journey. While it’s easy to get lost, it’s hard to begrudge the game when everything is genuinely so pretty. Plus, the entire world culminates in an epic fight against sea monster Ursula which should be considered one of the best fights in the entire franchise.

As with Atlantica, Monstropolis is another world where ‘blending in’ is part of the fun. Here, Donald, Sora and Goofy become wacky and adorable monsters on a quest to rescue the iconic Monsters, Inc. factory from being controlled by nefarious Heartless enemies. Along the way, they meet the adorable Boo, make friends with Mike and Sully, and even learn a little bit about human emotions.

Beyond the fun of seeing the main cast of Kingdom Hearts as monsters, Monstropolis is also a wonderful romp through Monsters, Inc. history, and features a story that wouldn’t feel out of place in a mainline film. The franchise is certainly deserving of more love – and the appearances of Mike, Sully and the crew in this adventure are most welcome. While it lacks the ‘wow’ factor of some other worlds, this chapter makes up for it with a great story, and plenty of soul.

The Winnie the Pooh ‘100 Acre Woods’ level first appeared in the original Kingdom Hearts, and has since featured in nearly every mainline game – for very good reason. No matter your age, it’s likely you have some affinity for the titular Pooh, who spends his days eating honey and relaxing in his cosy house. It’s aspirational, really. Everybody loves Pooh, and it’s always lovely to see him in Kingdom Hearts – no matter the circumstances.

The 100 Acre Wood levels rarely feature any actual combat, but that’s what makes them so special. They’re a breath of fresh air in a game that often revolves around confusing lore, advancing darkness and massive tides of enemies. When it gets overwhelming, you always know the 100 Acre Woods, with its calming forest views and cosy mini-games, is waiting. It’s pure and wholesome, and while it’s certainly a bit out of place in the action of Kingdom Hearts, this world is always very charming when you stumble across it.

The Pride Lands from The Lion King are another excellent example of how the worlds of Kingdom Hearts can transform gameplay to fit each unique Disney adventure. Here, Sora is a lion. Donald Duck is a flying bird, and Goofy is a tortoise. As a result, they all have unique attacks and ways to interact with the world, with Sora fighting with his Keyblade clenched between his baby lion fangs. It’s adorable, but it also makes Pride Lands superbly fun to play through.

That’s not to mention that this is an extremely pretty locale, one that features iconic locations and story beats from across The Lion King. From the creepy, dried up Elephant Graveyard to the vast plains of the Savannah, there are plenty of sun-soaked lands to journey through, and plenty of reasons to fall in love with this dense, gorgeous world.

The hedge maze of Wonderland in the original Kingdom Hearts remains an impressive location, one that makes the entire Alice in Wonderland-themed chapter a memorable and exciting romp. The card guards make for great throwaway enemies, and there’s always plenty of mayhem hiding around corners, between towering bosses and the coy ramblings of the Cheshire Cat.

While Wonderland first appeared in the original game, it also got subsequent showings in both Chain of Memories and 358/2 Days, with both additional levels being equally as impressive as this first bite. The world of Wonderland is absolutely classic, and while it remains one of the shorter chapters in Kingdom Hearts, its stylish nature and fun boss battles remain great.

Symphony of Sorcery is a Kingdom Hearts 3D: Dream Drop Distance world based on Fantasia – and while it’s only appeared in one title, it should certainly get the chance to shine again. This world is directly inspired by the ‘Sorcerer Mickey’ segment within the classic musical fantasy film, and features a romp through the tower of magician Yen Sid, and a younger, more inexperienced version of Mickey Mouse.

Not only is Symphony of Sorcery a gorgeous and very inspired level choice, it also gives players a chance to see the origins of the Kingdom Hearts series. Sorcerer Yen Sid, who plays an essential part in franchise lore, was first introduced in Fantasia – although his origins are rarely discussed. By finally exploring this world in more detail, Dream Drop Distance introduced a very important, fun and colourful part of Kingdom Hearts lore. Plus, like Atlantica, it also introduced some fun rhythm elements to the game.

Timeless River is absolutely stunning, and one of the most unique Kingdom Hearts worlds in the entire franchise. Here, Sora is transported into a 1920s-era cartoon, completely with a black-and-white filter, a brand new art style and the original version of Mickey Mouse, who made his real-life debut in the Steamboat Willie cartoon on which this world is based.

In addition to art style, this world replicates a lot of the quaint feeling of classic cartoons via an excellent, boppy soundtrack and noise filtering that makes dialogue sound like it’s coming from an old, staticky TV. Add in a cutesy story about Sora joining Mickey on his very first adventure to take down the villainous Pete, and you’ve got one excellent world that is timeless in both name and nature. It really is a black-and-white joy.

In Kingdom Hearts 3D: Dream Drop Distance, you can team up with a digital Garrett Hedlund, a digital Jeff Bridges, and a digital Olivia Wilde, to take on misguided android Rinzler and the robot army of CLU. And it’s fantastic. In this Tron: Legacy-themed world, it’s all brilliant neon hues, techno beats and Light Cycle action as Sora and Riku attempt to free the digital world from the clutches of evil. And, once again, you can do it all with a digital Jeff Bridges by your side.

Tron: Legacy may be one of Disney’s most underrated franchises, but it certainly gets a good showing in Dream Drop Distance. While The Grid isn’t a new location – it first appeared in the Space Paranoids chapter of Kingdom Hearts 2 – the refreshed neon look in this newer adaptation is fantastic, and helps keep the action cool and slick. While The Grid does feature some majorly powerful bosses, the cool factor of the level keeps the frustration at bay.

Port Royal is one of the wackiest worlds in the entire Kingdom Hearts franchise, largely because Sora, Goofy and Donald stick out so much in this adventure. This world takes direct inspiration from the live action Pirates of the Caribbean films, and attempts to give main characters Jack, Will and Elizabeth photorealistic faces – which directly contrast with the colourful, cartoonish style of Kingdom Hearts 2. This is essentially a real-life world populated by pirates and drunkards that love to pillage and loot – and also a spiky-haired anime youth who swings around a giant key for a weapon.

Once you get past the hilarious contrast, you’ll find Port Royal is actually one of the deepest Kingdom Hearts worlds around. With a fantastic story that fits both Kingdom Hearts and Pirates of the Caribbean, and some excellent voice work (particularly Jack, voiced by James Arnold Taylor) this tale is appropriately swashbuckling, and a whole bunch of fun. Plus, it’s directly inspired by The Curse of the Black Pearl, which is arguably the best part of the entire Pirates legend.

Halloween Town, a world inspired by Tim Burton’s The Nightmare Before Christmas, is the perfect Kingdom Hearts world. To kick things off, Sora and the gang use this tale to rock spooky looks that range from ‘the mummy’ to ‘Frankenstein’s monster’ to ‘goth lolita vampire bat’ – a range that’s rarely been matched in franchise history.

Moments after their fashion statements debut, the gang is sent on a vast journey through the horror-themed world of Halloween Town to save Christmas and defeat the evil Oogie Boogie – a quest impeded by Heartless hordes and Oogie Boogie’s minions. With the Christmas-loving Jack Skellington fighting by their side, the town eventually lands them in great and exciting peril.

Luckily, it’s not just the story that shines brightly in this adventure, it’s every facet of gameplay, from the design of Halloween Town, to the final, epic confrontation with Oogie. It really is a triumph, and one of the best Kingdom Hearts worlds we’ve seen so far.

It certainly deserves a return in Kingdom Hearts 4, or in a future entry of the long-running franchise.

Agree with our picks? Disagree? Head on over to the GamesHub Twitter and Facebook to argue your case.