Gotham Knights is determined to escape the shadows of the Arkham series – but lives up to its legacy regardless.
Leah J. Williams 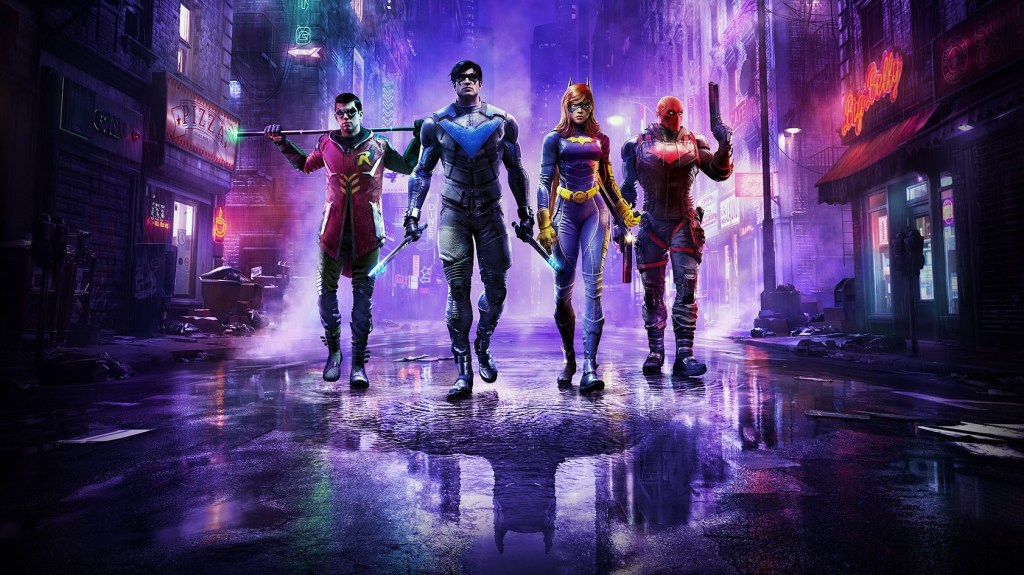 Gotham Knights seems determined to carve out its own legacy. ‘The Arkham series? What’s that?‘ it seems to say. ‘We’re different. We have the Batfamily, and one or two player co-op, and segmented quests, and a Red Hood with a bad haircut.‘ But try as it might, Gotham Knights can’t escape the shadows of the Arkham series – which filter into the game via every quest line, gritty character interpretation, and city street. That’s no bad thing though, with the influence of Arkham injecting this gothic co-op adventure with a real sense of style, free-flowing combat, and a glorious open world.

In Gotham Knights, Batman is dead, killed in combat by the ever-resurrecting Ra’s al Ghul. This is the scene we open on – Batman’s last, desperate moments, clawing for breath as his enemy advances. In a flashy CGI cutscene, we learn of his fate – and of the video message he leaves for his family – Jason Todd (Red Hood), Dick Grayson (Nightwing), Barbara Gordon (Batgirl) and Tim Drake (Robin).

Gotham’s greatest defender might be dead, but the criminals of Gotham live on, growing bolder in the absence of the menacing Bat. As one of the four members of the ‘Batfamily’, you must forgo the grieving process and hit the streets to fight back crime, using your unique skills and combat techniques to take on a range of villains.

Once you hit a certain point in the adventure – around an hour in – you’ll unlock the ability to play co-op with a partner. Each of you can then embody one of the Batfamily, and fight together across a range of quests. The nature of reviewing a game, particularly in a busy release season, is that co-op wasn’t possible for my playthrough. Instead, I played through solo as Red Hood – a character who is typically a lone wolf anyway.

As a solo game, Gotham Knights is an absolute blast – and while the segmented nature of the story and bite-sized quests are clearly designed for drop-in, drop-out co-op gameplay, I didn’t feel playing the game solo took anything away from my experience. With hearty, story-based questlines and tasks that keep you pushing onwards through a murky, tension-filled story of subterfuge and villainy in the seams of Gotham City, Gotham Knights continues to be fresh and moreish with each beat.

There’s also a real sense of variety in this world, with the game’s action broken up into individual case files, hero tasks, quests, and collectibles that each test different skills. During each ‘night’ of the game, you set forth as your chosen character, with the aim of cleansing Gotham’s criminal element.

Your nights are determined by your sense of adventure – do you want to head directly for the main story, which spells a tale of corruption at the heart of Gotham, thanks to the Court of Owls? Do you want to pursue individual villains – like Harley Quinn, who’s managed to escape Blackgate Prison and kickstart her own series of successful talk shows? Do you want to tackle Mr Freeze, who’s determined to make Gotham his own icy prison?

Each clue and case file brings you closer to the crescendo of each villain’s tale, which usually plays out in cinematic and sonorous cutscenes taking you from the heart of Gotham, to cloistered stage plays, to rioting streets.

If those sweeping, cinematic tales aren’t enough for you, you can also devote time to ticking off your standard open-world tasks – discovering fast travel points, stopping crimes in their tracks, hiding Batman’s secret identity from the cops, or completing speed-based time trials.

At the end of each night, your list of accomplishments is tallied up and you’re made keenly aware of how Gotham is evolving with the Batfamily at the helm.

While the bigger quests are split into chunks, they follow a linear path – much like in the classic Arkham series. Combat and gameplay also revolve around similar beats to Arkham, including segments for investigations that mirror the vignettes in Arkham Origins. It’s not all beating up bad guys with your fists, guns and grappling hooks, Gotham Knights is also rather good at slowing down – giving you time to investigate your surroundings, interrogate nearby criminals, hunt for clues, and make human connections.

This care extends to the Batfamily itself, which gathers in a central Belfry between missions, to reconnect and discuss each story clue as they stumble upon it. In shared moments, you learn more about each hero. Jason and Barbara share a quiet session of a Just Dance-like game, which opens up into a deeper exploration of Jason’s past and resurrection via a Lazarus Pit.

Alfred gets plenty of moments to shine in these vignettes, acting as the loving caretaker of the family. While the dialogue is occasionally naff – Jason is written to be a brooding, ‘edgy’ anti-hero and Barbara has an annoying tendency to ‘well, actually‘ each clue – but there’s a real heart in the game’s depiction of each hero.

Likewise, combat is a sleek and well-read interpretation of each character’s strengths.

As Red Hood, you have a focus on gunplay and mystic-powered melee attacks. The hero has access to twin pistols, and can also charge up a powered punch using Lazarus Pit-induced magic – a slight diversion from the character’s comic story, but a blast to use regardless.

Nightwing, meanwhile, is extremely acrobatic and weaves hard-hitting baton attacks with smooth avoidance tactics and grace. His higher-powered special attacks introduce high-flying ground pounds and sweeps, which come in handy against heavyset enemies and those with short reaction times.

Batgirl is also athletic, and combines lithe sweeps and baton melee with caltrops attacks and kicks. Both Batgirl and Nightwing share a frantic movement speed, with her power coming from lighter, faster moves.

Robin opts for using a bo staff for his attacks – and this certainly comes in handy when you’re dealing with huge waves of enemies. A super-powered attack initiates a free-flowing halo of bo staff attacks that’ll knock out any nearby villain with aplomb. It effectively clears your path, and creates breathing room between mob hits.

It’s worth playing each hero to find out which combat styles suit your tastes – although you can swap freely between them each night you return to the Belfry. The way this game is set up means you can actually play through it four times – once with each hero – and experience unique dialogue and cut scenes with every round.

Each hero has their own storyline and personal plot, and will react differently to the game’s events – nearly making Gotham Knights four complete solo games. There are few crossovers in each story vignette – inactive heroes won’t join you in the open world except via radio – and there are only a handful of shared scenes between the Batfamily.

It’s here where the dissonance of Gotham Knights is most clear. While the game encourages co-op gameplay, the structures of combat and tasks feel so well-suited to solo play there’s really no reason to play with a mate, or expect your fellow Knights to help you.

While having a friend would likely help in some of the boss fights – Mr Freeze is particularly vicious – the game feels wholly designed for solo play.

As you roam the streets, you never encounter the other members of the Batfamily. They’re assumed to be helping out behind the scenes, and do sound off on radio waves, but playing alone means they barely rear their heads in gameplay. So when you’re stuck in a mine far beneath Gotham, seemingly with no means of escape, it’s solely up to you to survive.

Wherever Nightwing is, or Batgirl, or Robin – they’re not there for you. In a game that’s largely marketed around the Batfamily, as a whole, this lack of participation feels odd. When I was being ground to dust by lasers in Mr Freeze’s lair, I could certainly have used a helping hand. But without a secondary player, no help arrives.

This lack of familial integration certainly feels odd in a tale that so frequently references family and love, however, it does also clear a path to explore Gotham far and wide, unbound by the demands of others. As Red Hood, you can spend your time air-leaping through neon, bright city streets, or riding a tightly-controlled motorcycle through laneways and alleys. You can jump into your nearest crime area, and beat up as many bad guys as you like. You can complete quests for The Penguin, Renee Montoya, Lucius Fox, or Leslie Thompkins.

You can travel down rabbit holes, investigating the emergence of new enemies and threats. The world is your oyster – even as a solo fighter. Much like Arkham‘s Batman before you, your task for justice often feels insurmountable, with ever more quests on the horizon – but every question has an answer, and tantalising clues await you with careful planning, and plenty of punches.

Gotham Knights owes a lot to the Arkham series in its hard-hitting combat encounters and gothic quests, which adapt the comic source material with neat twists and hooks. It’s similar enough to be considered a spiritual successor, an unofficial sequel – and fans of these games will no doubt be surprised by the strength of this connection.

While it does attempt to carve out its own identity with its slower pace and more intimate storytelling, it’s hard to separate this game from the Batman games of the past. But regardless of its lack of originality, Gotham Knights remains a compelling experience – one littered with intriguing and thoughtful interpretations of characters, and a creeping sense of dread that will keep you rushing through case files, determined to save Gotham from itself.

With time, a hearty sense of determination, and mastery of each character’s unique moveset, you’ll eventually find the light shining in this neon-infused, villain-plagued romp.

The PlayStation 5 version of Gotham Knights was provided and played for the purposes of this review.