The hybrid nature of the ASUS ROG Flow X16 (2022) gaming laptop makes it an attractive and versatile option as a gaming and work machine.
Edmond Tran 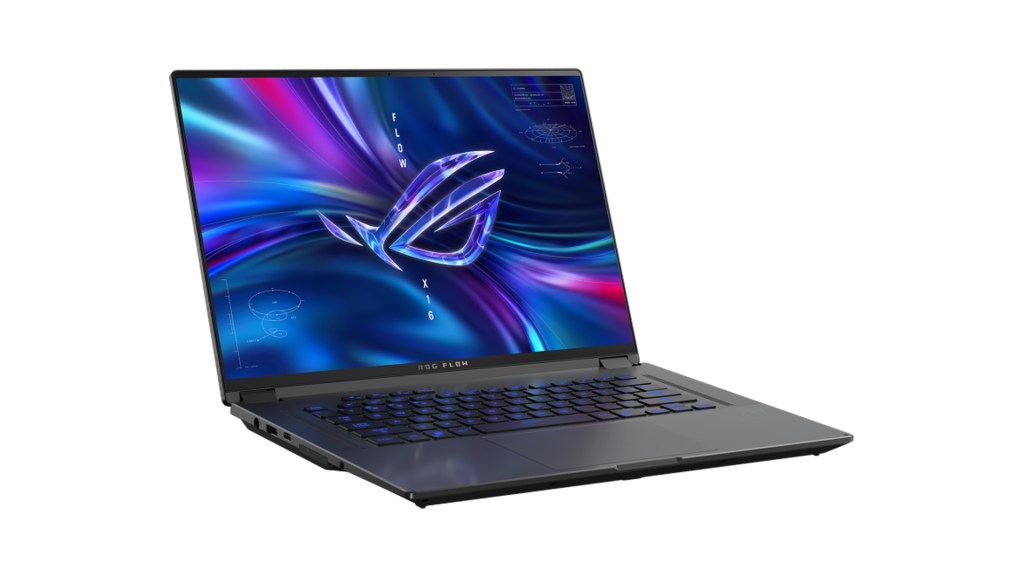 My ongoing quest to find a great multipurpose laptop continues with the ASUS ROG Flow X16 (2022). I previously took a look at the 2022 Lenovo Legion 5i Pro, with the goal of assessing how it played graphically demanding PC games, while also being sensible enough in terms of look, build and longevity, to make it something I could comfortably carry and work remotely with.

The reason is that building a custom, high-end desktop computer for PC gaming and having a separate work laptop – what I’ve typically done in the past – is becoming a more expensive foray today. Rising costs of manufacturing plague the production and shipping chain of the computer industry. But with rapid advances in tech, I’ve been more amicable to the idea of all-in-one machines, especially curious about laptops geared towards gaming. Versatility and power would be ideal.

The Lenovo Legion 5i Pro was a great workhorse of a laptop that ticked a lot of boxes, in terms of build and performance, and set the bar for the power I could expect from gaming laptops in 2022. While the ASUS ROG Flow X16 shares comparable performance, in using the X16 for a prolonged period, what I found myself appreciating most were features of its physical build that I wouldn’t normally consider relevant.

The ASUS ROG Flow X16 is billed as an ultra-slim laptop, and weighs 2 kilograms, which is just about the gold standard for a modern laptop of this power class and screen size (16-inch). But what’s key to the X16’s identity is that it’s a hybrid laptop as well – the screen is on a 360-degree hinge, which lets you fold it all the way around to turn it into a touchscreen, tablet PC.

This isn’t a new idea by any means, but I’ve never personally considered it as a must-have feature, let alone one geared towards playing video games. However, given we’re in the age of the Nintendo Switch and the versatile gaming device, I really only have good things to say about it.

There were two particular use cases I quite enjoyed. The first is in treating the X16 as a touchscreen tablet PC, and using it specifically to play turn-based strategy games, and point-and-click adventure games – both benefitting very well from touch-based interaction.

If you like playing strategy games like Civilization VI and XCOM, or adventure games like Return from Monkey Island and The Excavation of Hob’s Barrow, then this a great way to play them in a more relaxed manner – as you would on a portable game console or mobile tablet device, without compromising screen real estate or visual fidelity.

The second use case is something I found myself using even more frequently: tent mode. By flipping the screen back at a 270-degree angle, you can position the X16 in an upside-down ‘V’ shape, and easily place it on a desk or coffee table.

You can also position the laptop with the keyboard facing downward, the screen past the 270-degree angle, and have more flexibility in the angle of your screen. I personally felt a bit wary of scuffing the keyboard surface, despite it featuring rubber feet that exist precisely for this purpose. Regardless of how you set it up for a screen-only experience, it’s a great option – whether you’re using it to watch YouTube or streaming services, or playing games.

Playing games using the X16’s tent mode with a controller is novel, and pretty great. During my time with the unit, I played a couple of new release games in full for reviewing purposes (Scorn and A Plague Tale: Requiem – both graphically demanding games). It’s quick and easy to prop up the X16 on any surface, the touchscreen (and Windows 11’s user interface) removes the need to access the physical mouse and keyboard in most instances, and it’s basically like having a huge Nintendo Switch – only it plays PC games.

These options are all very convenient. I was actually surprised by how useful these seemingly innocuous options were. If we’re being honest, I would’ve told you they were silly ideas at the outset. But in thinking about a laptop that excels at both work and play, versatility is key – and the X16 definitely has that ingrained in its build philosophy.

The chassis is slick and simple too, with very welcome, minimal flourishes. A small branded badge in the corner of the grooved lid is the only highlight, which is good and no-nonsense. The keyboard features RGB lighting, of course, but it can be customised and switched off entirely. The power pack is cumbersome, but that’s a common gripe with PC gaming laptops, unfortunately. (My next goal is to see if Apple’s move into promoting gaming on their always stylish and minimal MacBooks has any weight behind it.)

It is worth noting there are some downsides to having the 360-degree hinge, despite its benefits. The tension on the screen can sometimes feel a bit too loose – in my time working and writing on the laptop remotely, the screen would often flop around as I shifted the device on my lap, and if you’re trying to get things done on a bumpy train ride, it can be a tad annoying to have to constantly readjust your view. Other than this gripe, the tapered edges of the already-thin unit made it quite comfortable to work on at weird angles.

The main downsides lead into the discussion about the experience of using the X16 as a gaming laptop, and also pertains to every other model of PC gaming laptop out there – the fan noise can get insane, and is definitely more prominent in the tent and other hybrid modes, where the hot air is shooting up from the hinges at the top of the ‘V’ shape. It’s not an issue if you’ve got a good pair of noise-cancelling headphones, but you are bound to get complaints from people around you.

Typical noise complaints aside, however, it’s hard to fault how well this laptop performed in our experiential tests with it. The unit I had was equipped with a GeForce RTX 3070 Ti Laptop graphics processing unit (GPU), which is certainly on the higher end of things, as well as an AMD Ryzen 9 6900HS (CPU).

Playing new-release games, like the aforementioned Scorn and A Plague Tale: Requiem at 1600p (a slightly wider-than-widescreen 16:10 ratio (2560×1600), which is common in the current generations of gaming laptops) was a great experience, with frame rate performance more or less consistently hitting 60 frames per second. No complaints here.

Booting up the demanding Cyberpunk 2077 for a more strenuous test, I got a pretty solid, typical experience of hitting a framerate of roughly 45 frames per second on high graphical setting presets – perfectly playable in my books. Adaptive variable refresh rate syncing also helps to smooth over any minor jumps in the constants. I’m personally quite happy with a constant 30 frames per second performance rate to allow for more detailed visuals (depending on the game, of course).

Unfortunately, I can’t speak to the performance of the X16 models with lower-end GPUs – it also comes in versions equipped with the GeForce RTX 3050 and RTX 3060, which are hundreds of dollars more affordable than the RTX 3070 model.

The X16 appears to retails for slightly more than other 16-inch gaming laptops at a glance, with models sitting within the AU $2,600-3,300 mark. Of course, prices on prebuilt PCs often fluctuate throughout the year.

It’s worth noting the X16 is also compatible with the Asus XG Mobile external GPU box, which can provide significantly more GPU power to the laptop and enhance its performance when driving a higher-resolution screen, or just in general, depending on the gap between the internal and external GPU. The cost of this unit will also set you back over AU $1,500, though it could be worth considering as a long-term investment for later, if you opt for the lowest-end model.

The flexibility of the ASUS ROG Flow X16 is certainly an unexpected and attractive X-factor, a trait which isn’t replicated by many of its current competitors in the market. From a lifestyle perspective, I wasn’t expecting those aspects to matter at all – but after using them in earnest for a month, I’m definitely now missing their absence.

In thinking about a laptop that functions well as a portable workstation that’s also powerful enough to play PC games wherever my office is for the day, versatility is an important factor. The hybrid nature afforded by the build and the design of the X16, on top of its strong gaming performance, makes it a very attractive long-term investment.

The higher-than-average price point may be a deal breaker, depending on your personal budget, but regardless, this is a great bar to measure all other gaming laptops against.

An ASUS ROG Flow X16 (2022) was loaned to GamesHub on a temporary basis for the purposes of this review. GamesHub has affiliate partnerships. These do not influence editorial content. GamesHub may earn a small percentage of commission for products purchased via affiliate links.