A welcome, comforting homecoming through the sights and sounds of a charming, timeless world.
Edmond Tran 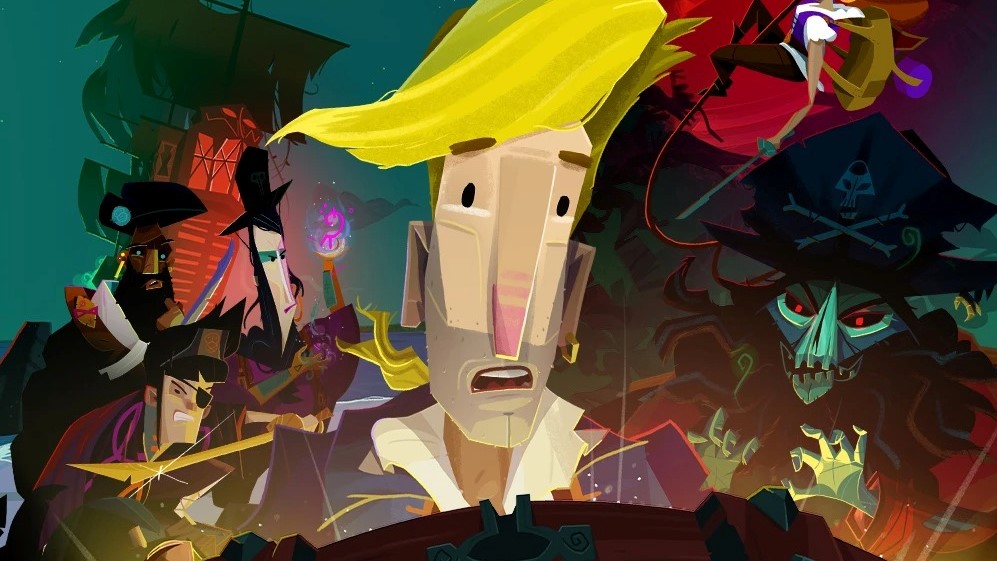 The second I heard the sound of flutes and marimbas waft through my ears at the beginning of Return to Monkey Island, I had a big, involuntary smile on my face. Like a generation of people who grew up playing LucasArts adventure games on absolutely ancient computers, The Secret of Monkey Island and its sequels were key in cementing a lifelong love of the American flavour of the point-and-click genre – something that almost went completely extinct.

But now it’s 2022, and the existence of Return to Monkey Island feels like an impossibility somehow made real. The title is a return in a few ways – it sees original series co-creators and designers Ron Gilbert and Dave Grossman return to the property together, for the first time since Monkey Island 2: LeChuck’s Revenge (1991). But it also marks a full-circle return for Western adventure games. Following decades of evolution, near-extinction, modern transformations, and the revival of traditional-style adventure games from smaller teams, we’ve found ourselves back in a new point-and-click renaissance, a world where companies – like the Disney-owned licence-holder Lucasfilm Games and publisher Devolver Digital – believe games very much like the original Monkey Island can thrive again.

Read: The best point & click adventure games to play in 2022

And yes, Return to Monkey Island feels very much like a natural continuation of the first two titles in the series from 1990 and 1991, in both narrative and structure – despite a sharp and stylish new art direction which provides an excellent new visual identity. But this new adventure for protagonist Guybrush Threepwood certainly still makes a strong impression, despite its unchallenging nature – for the most part, it might as well still be the 1990s as far as Return to Monkey Island is concerned. That just goes to show how strong and appealing the design and world of the original games were.

Thematically, Return to Monkey Island is a homecoming, a return to old haunts with new perspectives informed by everything that’s happened since. For those who are acquainted with the original games in the series, you’ll likely share the same perspectives and outlooks as Guybrush Threepwood in Return. There are plenty of new people and places to see, of course. But without giving away any details, you’ll also revisit numerous familiar locations, encounter several more familiar faces, and frequently reminisce about how things used to be. It’s a positive, heartwarming experience.

The actual motions of Guybrush’s journey will feel like something akin to settling back into old routines – in the most comforting way possible. You’ll be set up with a number of interwoven goals that need to be achieved in a defined area, and reach them by exploring scenes, pursuing amusing conversations with colourful characters, and finding irreverent solutions to puzzles, with humorous logic that only make sense within the fiction of the world. With each new act, you’re given a bigger variety of areas to explore, the formula gets more complex, and the eventual untangling of everything gets more satisfying.

The biggest drawcards of Return to Monkey Island are naturally the characters, as well as the writing and dialogue that brings them to life. Actor Dominic Armato returns as the voice of Guybrush Threepwood, and his interactions with Monkey Island’s irreverent cast and off-kilter world are consistently whimsical, filled with frequent, understated gags that make the return to Monkey Island a joyful one peppered with chuckles.

A couple of significant modernisations also help to make Return to Monkey Island far more approachable, too. A heavily streamlined point-and-click interaction system contextually offers you, at most, two interactions per world object, taking the guesswork out of examining and manipulating things, and freeing up your mental energy to consider the actual puzzle solutions that often require out-of-the-box thinking.

Return to Monkey Island also features an excellent, refreshingly no-nonsense hint system. It’s a magical book that stays in your possession at all times, and essentially works as an in-game version of the long-running online adventure game resource, the Universal Hint System. It offers a drip-feed of obscure hints related to particular tasks that get incrementally more obvious the more you prompt it, even offering solutions outright if you really need it. It’s quick to use, and trusts you with controlling how much information you think you need. Most importantly, it stops you from pulling your attention away from the game and into a web browser, and reduces the risk of spoiling a puzzle for yourself outright – after all, sometimes all you need is the slightest suggestion of the right direction.

Return to Monkey Island isn’t a grand reinvention of point-and-click adventure games in mechanical or narrative ambition. It is, quite literally, a return. It sticks to its own identity, and aims to be the best version of itself – a comforting, charming game with great characters and amusingly esoteric puzzles. That a new Monkey Island game exists with Gilbert and Grossman at the helm makes Return to Monkey Island an attraction well worth the curiosity. And that this traditional format still satisfies while remaining largely unchanged, several decades later, speaks volumes about how timeless their ideas and this world have always been.

The PC version of Return to Monkey Island was provided and played for the purposes of this review.