Despite its gruesome, nightmarish, and repulsive world, Scorn is very good at piquing your curiosity about its environment and mysteries.
Edmond Tran 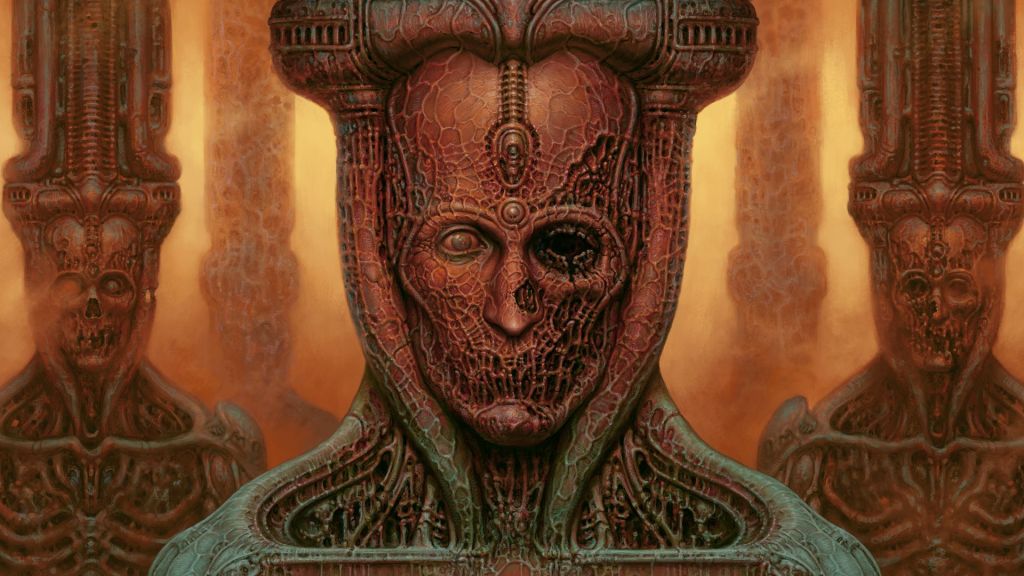 Play Scorn is the closest I’ve ever come to vomiting while playing a video game – and not for motion sickness reasons.

I was completing an objective where I had to transport some kind of mechanical egg across the gooey, dank, nightmarish labyrinths which make up the game’s environments, using various lurching machines built of iron and flesh. Near the end of this process, I managed to get a closer look at what was moving around inside the half-open egg – a mess of writhing limbs. They probably belonged to a humanoid creature at some point, but it looked like they had been melted into the shell of the egg, creating a hardened goop of arms, legs, and a head that had no mouth, but was trying to scream.

To proceed, I pulled a series of levers to place the egg on a pedestal, and then caused a large, menacing, and sharp mechanical hook to forcibly scoop the sorry creature out of the egg it was fused to. The sound was awful. Pops and crunches and squishes. A torrent of blood gushed out. The creature emitted pained noises as it was ripped out and dumped into a pit in the ground. My body had a physical reaction.

Nope. I got up, and went outside to look at some trees.

Scorn is a first-person adventure game, filled with environmental puzzles, and set in a nightmarish world. It’s not strictly a horror game, in the sense of a game that aims to scare you with scenarios that pump you full of adrenaline, but it is filled with horrific sights and concepts that make you feel nauseous and uneasy. The world of Scorn is not a pleasant one that you want to spend time in.

That said, it is an intriguing world – one I couldn’t help but be morbidly curious about, despite the horrors I had seen.

Scorn very quickly builds a tantalising sense of mystery about its gruesome, gory world – one heavily inspired by the biomechanical ideas of artist H.R. Giger. With no guidance through the world and sparse UI elements, you’re left to your own devices to explore, identify in-world clues, and trust your gut as you try and decipher how the environmental mechanics of Scorn operate, and how to move forward.

You can’t help but be curious about the intricacies of Scorn’s repulsive world, which almost immediately makes you feel uneasy. The idea that much of the discovery and solutions to puzzles completely require your attention and ability to deduce logic makes the journey all the more captivating – a similar sense of satisfaction to Myst and its ilk. At certain points, I would discover items I had no idea how to use until hours later. Those discoveries felt like delayed eureka moments, rather than frustrating oversights, given the onus was put exclusively on myself.

What little genuine frustration exists in Scorn mostly comes from its occasional combat encounters. They largely feel like an exercise in careful planning and weapon resource management – something that does tie Scorn to the survival horror mould. But in trying to decipher the best and most efficient way to overcome the games’ unsettling enemies with trial and error (where are the obvious weak points in a headless, monstrous animal? Are those even limbs?), I discovered that the checkpointing wasn’t what I would call generous.

But the fact that Scorn continues to foster this strong sense of enticing mystery regardless is quite an achievement given that, at almost every step of the journey, I wanted to walk away from the game.

The world pulses with a nightmarish atmosphere. It’s grotesquely detailed, built with sinew and flesh, fused with metal and stone. Your protagonist’s form is akin to a skinless body model, and virtually every new puzzle and mechanic sees your body traumatised in some manner – sharp implements dug into your muscles, monstrous arms plunging themselves into your organs. Certain levers see your protagonists’ fingers delicately inserted into fleshy, individual orifices – which never ceased to make me wince.

I certainly don’t enjoy Scorn in the way that I do most video games. The thought of revisiting its monstrous world makes me feel ill. But I respect Scorn for its technical artistry, design and environmental world-building that successfully encourages player agency, and how strong and cohesive it feels in its overall creative vision, despite its mentally and physically taxing nature.

The PC version of Scorn was provided and played for the purposes of this review.