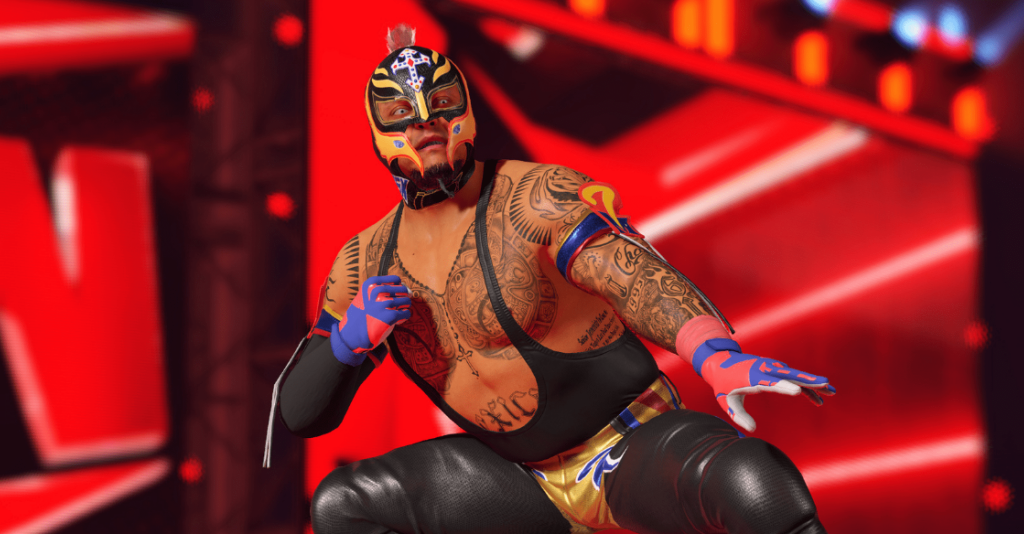 WWE 2K22 has finally gotten a firm release date after clinging to a nebulous ‘March 2022’ period for nearly an entire year. The game will now launch on 11 March 2022, with preorders kicking off at physical and digital retailers from Friday, 21 January. When the game launches, you can expect an overhauled game system, shiny new graphics, and plenty of high-flying antics.

This year’s cover star, Rey Mysterio, will get his very own 2K Showcase in WWE 2K22, which is set to highlight a number of his best matches and most iconic moments from WWE history. Unfortunately, this mode is likely to include some gaps – including great matches with Chris Jericho and CM Punk, who now work for rival company AEW – but it should still prove to be a worthy highlight reel for the tenured star.

In addition to the refreshed 2K Showcase mode, WWE 2K22 will include some major changes for fans of the franchise. The game is built on a brand new engine, for one, so players can expect shiny new graphics, improved realism, and hopefully less of that horrifying ‘spaghetti hair’ that always seems to plague female character models.

According to 2K Games, change has also come for the ‘create a wrestler’ function – you’ll now be able to create better-looking, fully-customisable characters that you can then send on their way to stardom in MyRISE mode.

Read: WWE 2K22 will reportedly include wrestlers released in 2021

In addition, MyGM and MyFACTION are coming to WWE 2K22. In MyGM, players will be able to embody the mysterious General Manager of WWE who can draft superstars, set up rivalries and help guide the direction of WWE TV (in the game, of course).

MyFACTION will similarly let players ‘collect and manage their dream faction’ with a number of weekly events and challenges to work through in your quest for glory.

A new trailer has shown off some fresh gameplay, and also given a small glimpse at the game’s roster:

The Undertaker puts in one of his annual, post-retirement appearances here – defending Machine Gun Kelly, who serves as the soundtrack producer on the game. There are also glimpses at Big E doing some great-looking mo-cap work, and Bianca Belair going head-to-head with Australia’s own Rhea Ripley.

In addition to this new glimpse, 2K Games has also revealed four editions for the game’s launch: the Standard Edition, the Cross Gen Digital Bundle, the Deluxe Edition, and the limited nWo 4-Life Digital Edition.

The Standard Edition is available in both physical and digital formats and includes no extras. There’ll be two versions, last gen (PS4 | XBO | PC) and next gen (PS5 | XBS/X).

The Cross-Gen Bundle includes the digital Standard Edition and the Starrcade ’96 Rey Mysterio Pack. It appears this version will work on both last gen and next gen consoles within the Xbox and PlayStation families.

The Deluxe Edition will be available in both physical and digital formats (just on digital for PC). It includes the Standard Edition, plus the Undertaker Immortal Pack, a season pass to five post-launch DLC content packs, the MyRISE Mega-Boost and SuperCharger packs, WWE SuperCard content and access to the game three days early. The PlayStation 5 and Xbox Series X/S editions of this pack will also receive the Starrcade ’96 Rey Mysterio Pack.

The nWo 4-Life Digital Edition will include all content from the Standard and Deluxe Edition as well as MyFACTION EVO cards, alternate nWo attires for Hulk Hogan, Scott Hall, Kevin Nash and Syxx (X-Pac / Sean Waltman) as well as a playable Eric Bischoff character, WCW Souled Out 1997 and WCW Bash at the Beach 1996 arenas, and the nWo Wolfpac Championship.

Unfortunately, the nWo content will not come with any Sting-related goodies, given he’s currently having the run of his life with Darby Allin in AEW.