The newest trailer for Sonic Frontiers has drawn major comparisons to The Legend of Zelda: Breath of the Wild.
Leah J. Williams 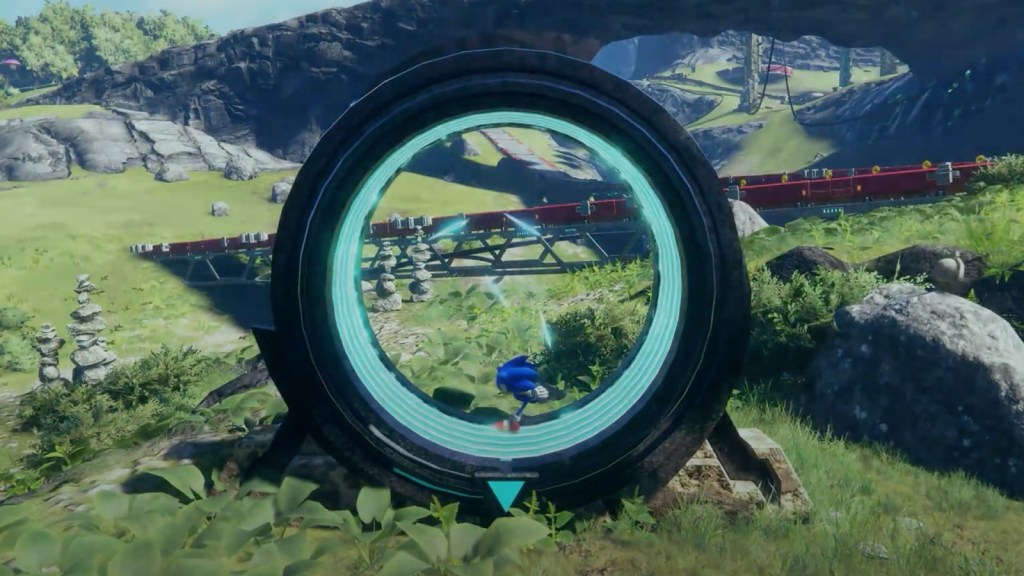 A new gameplay trailer for upcoming open world adventure Sonic Frontiers has led to Breath of the Wild trending on Twitter, as fans draw comparisons between the games. Frankly, the assessment isn’t unfair – the new trailer shows off a lot of similarities between Frontiers and Breath of the Wild, from monster design and exploration, to the game’s entire aesthetic.

The IGN First teaser kicks off with the titular Sonic running through a lush green wood. The colours here are halfway between the ‘vaseline lens’ look of Sonic ’06 and Breath of the Wild, with soft green plains and glowing blue skies above. As in Breath of the Wild, the landscape of Frontiers is also littered with high towers, which appear climbable.

That said, there are also key differences beyond the game’s idyllic open world look. For one thing, it appears traversal will be wildly different in Frontiers. The blue sky of this game is littered with rails that Sonic can slide on – and they appear to dot the entire landscape, presumably meaning Sonic will be able to cover great distances at speed.

Combat also looks fairly frantic, with slim snippets in the gameplay trailer showing off Sonic’s ability to run loops around his enemies to launch them into the air. From there, it appears he’ll be using his ball form and laser-powered kicks to attack – thankfully, there doesn’t appear to be weapon degradation in this title.

Sonic Frontiers appears to be heavily inspired by Breath of the Wild in many ways, but given the success and longevity of this title, it’s hardly surprising. Games have built on the innovations of the past in every generation, and it makes sense that Sega would attempt to capture the charm of Breath of the Wild in its reimagining of the Sonic franchise.

Whether it can live up to the homage remains to be seen – but early trailers are very charming, and show off a gorgeous world and fun combat that could certainly build on the beloved formula.

Sonic Frontiers is set to launch for PlayStation 4, PlayStation 5, Xbox One, Xbox Series X/S, Nintendo Switch and Windows PC in Holiday 2022. We’ll learn more about the game via IGN over the coming weeks.