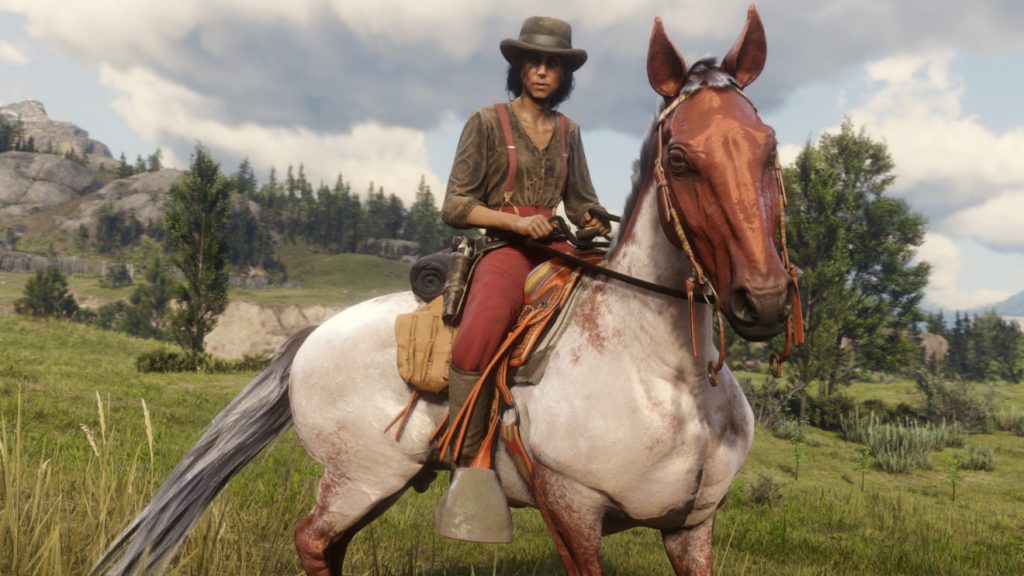 The ‘horse girl’ stereotype has existed for decades, and denotes a woman or girl who’s just obsessed with horses. Growing up in an all-girls school, there were plenty of horse girls around my childhood. Some drew horses in the margins of their note books. Some had horse wallpaper in their bedrooms. One loved horses so much she would ‘canter’ around the school playground pretending to be one. While horse girls previously gathered together in small friendship circles, it turns out they’ve managed to find a new, modern home in the wilds of Red Dead Online.

Red Dead Online, the MMO version of Red Dead Redemption 2, allows players to be whoever they want to be; ragged outlaws, law-abiding citizens or, as fate would have it, free-wheeling horse girls.

As reported by PC Gamer and Historical Games Network, horse girls are gathering en masse in Red Dead Online, with Discord group The Rift Trails bringing together a team of 1,690+ horse girls that take part in virtual rides together. Every day of the week, the group holds rides, where players come together in a virtual world to trot, explore and chat.

‘Quarantine [in 2020] happened and a lot of people weren’t able to see their horses,’ Chelsea Farace, a horse photographer and member of The Rift Trails, told PC Gamer. ‘Red Dead people were like “let’s have online trail rides!”‘

The popularity of the ground exploded from there, with many connected ‘horse girl’ groups eventually finding the Discord and involving all their friends.

‘We’re just a group of people who LOVE HORSES and gaming and we take weekly trail rides to chill out and have some fun together!’ the group’s Discord says. ‘Super friendly and free from toxicity.’

In the year since the popularity of The Rift Trails exploded, it’s become a safe haven for players of all kinds, who share their love for horses on a regular basis.

‘This server made Red Dead Online fun for me again,’ one testimonial reads. ‘Amazing community, everyone is so friendly and wholesome! They do regular events including trail riding, which is a good way to wind down and relax in this beautiful game.’

‘I have been here just over 3 months and in that time I have met some of the most amazing people and enjoyed the most welcoming and supportive team I have been part of in a long career of online gaming,’ another says.

It’s clear that the wholesome, horse-loving vibes of the group have made a massive impact on Red Dead Online players, with many expressing their love for group sessions and the social interaction rides allow.

PC Gamer reports the team is still going strong after its 2020 popularity boost, with the group holding 396 trail rides in 2021, and more planned in the months ahead.

While many playing Red Dead Online are focussed on bounties or causing havoc, The Rift Trails continues to carve out a much-needed niche where players can kick back, talk about horses, and enjoy the ambience of the game’s world.

For Farace, the realism behind the game is key to its success, and why the horse girl community has been so attracted to its world.

‘The simplest things make us so happy!’ she told PC Gamer. ‘They react to gunshots and getting bumped into … People that aren’t horse people might find that annoying because the horses have a mind of their own—but that’s real! It’s so cool!’

With plenty of customisation options and ways to interact with the game’s horses, it’s become a paradise for those who may not be able to see their real life horses, or those who appreciate horse behaviour from afar.

In addition, The Rift Trails group has also curated their own roleplay server which includes mods for ranching, becoming a horse, and additional horse features to improve realism and options for gameplay.

It’s allowed Red Dead Online to become a familiar, peaceful home for horse girls, with the community bringing people with common interests together. While the Wild West may seem an unlikely background for such wholesome activities, it’s a great indicator of how creative and loving online gaming communities can be.

While cowboys fight for land, the horse girls of Red Dead Online are thriving.

This article has been updated with new links to original reporting on the horse girl phenomenon.