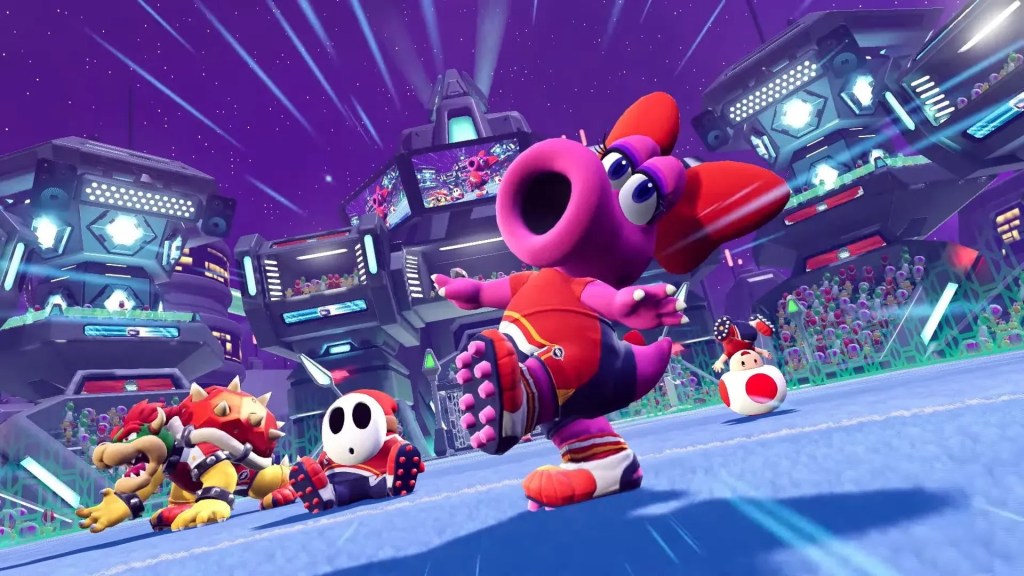 The final free update for Mario Strikers Battle League has been locked in, with Nintendo announcing a 14 December 2022 launch for all players in a new trailer. The third wave of post-launch content will introduce two new playable characters, Birdo and Bowser Jr., as well as new gear sets, and a snazzy stadium.

Bowser Jr. is a passing specialist with decent strength and speed, although he’s weak in technique, meaning he’ll have a harder time taking powered shots at the goal. The new trailer for the upcoming DLC describes him as a ‘balanced player’, and he’ll likely be a solid, basic pick for younger players. His special involves the iconic Junior Clown Car, which shoots into the air and lands on the Strikers field with punching arms that rotate and spin, knocking out players in its path.

This attack goes for high damage, although it does appear to leave Bowser Jr. briefly vulnerable.

Birdo is a shooting specialist with high technique, and low strength, speed, and passing. She’s a ‘striker with powerful shots, and an eye for goal’. Her special involves some funky dance moves, which crystallise the Strikers ball and send it shooting into the net. Anyone hit by this attack is forced into a colourful twirl.

This content will be available for everyone who plays Mario Strikers Battle League, free of charge. While it’s described as the final free update for the game, we may see paid expansions or new content in future. Stay tuned to see what’s in store for this Nintendo title.