We played Mario Strikers: Battle League, and were surprised at the complexities and skill demands in this full-contact soccer-like game.
Edmond Tran 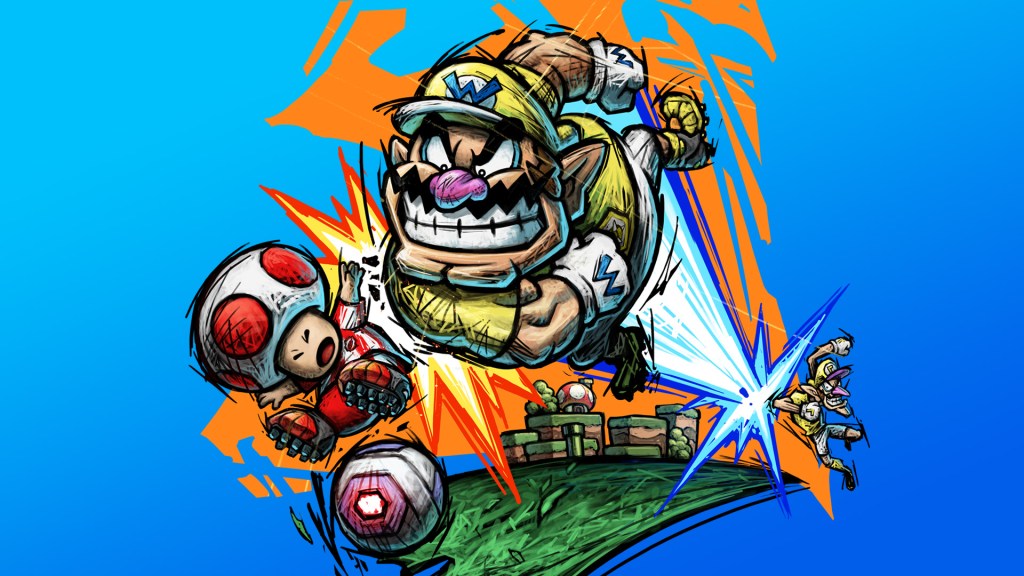 If you weren’t already familiar with the Mario Strikers series of sports games, you’d know the upcoming Battle League on Nintendo Switch (or Battle League Football if you’re in Europe or Australia) is different the moment you see Princess Rosalina shove Luigi into an electrified fence. Or the moment you see Mario perform a full body dropkick on his own brother.

You’d probably get the feeling this game is a little more intense than Mario Golf: Super Rush or Mario Tennis Aces when the iconic Nintendo Mascot does three backflips as flames burn in his eyes, whispering ‘Let’s-a Go’ as he pounds a flaming ball through his friends and virtually puts the goalkeeper in the hospital, as a heavy metal soundtrack thumps in the background.

Needless to say, Mario Strikers is a hardcore take on a sport that usually isn’t a physically damaging one, and Battle League appears to add more complexities and nuances to the formula that has garnered a cult following across the last two iterations on GameCube and Wii.

Mario Strikers is soccer with a twist

Original developer Next Level Games has returned in collaboration with Nintendo’s internal development team to iterate on its creation this go around. Based on a hands-on preview session with the game, it’s as hardcore in its mechanics as it is in aesthetics.

The basic rules are simple. This is a 5v5 soccer game (4 players on a field, with a standard goalie for each team) with no outs, no offsides, and no fouls, where tackling is encouraged to gain possession, or create openings.

You’ll put together a squad of four Nintendo mascots in this game, each of whom have different attributes on the field that determine their strengths and weaknesses, and how they interact when clashing with other characters. Goalies for both teams are AI-controlled Boom Boom Koopas, who are incredibly good at their jobs.

From there, the universal idea of kicking and passing the ball across the field, as well as attempting to misdirect the goalie to get a ball into the back of the net, is all you basically need to know.

The ceiling for the kinds of abilities and options you have on the field, as well as the nuances in each technique, is a high one. Quite frankly, there is a lot to think about and keep an eye on once you start moving into some of the game’s more advanced mechanics – enough that even at the end of our hour-long session with the game, things didn’t completely feel like second nature just yet.

Thankfully, the flashier and more prominent mechanics are familiar Nintendo staples, one of which is Items.

During the course of the game, boxes will begin appearing on the field – some which can only be claimed by a particular team, some which can be claimed by anyone – and breaking them will give your team a random item which any one member can deploy. There are Koopa shells to knock people over, Bob-ombs that go boom, and bananas that are slippery. You know, the usual suspects.

Then, there are Hyper Strikes, signature power moves that cause all action to stop while the character in question performs an incredibly over-the-top, anime-style shot that sends the ball towards the opponent’s goal in a path of destruction, with each character’s Hyper Strike having a different effect on the field. You gain the ability to perform these by picking up a Strike Orb when it appears on the field, granting your team the ability to perform it once they’re on the opponent’s half of the field.

While Hyper Strikes net your team two points instead of one, scoring a goal with a Hyper Strike is absolutely not a sure thing, which is where a lot of the finesse of Mario Strikers: Battle League comes into play.

To pull off a Hyper Strike in the first place, your character will need to be in a position where they have the breathing room to actually charge up the ability, and in such an aggressive game as this, that’s rarer than you think. The next step is timing-based challenge – a metre will appear with a swinging needle, and you’ll have to stop the needle on two pinpoint locations for the highest chance of success.

This needle skill check goes by very quickly, and the sweet spots are quite small; though characters with a higher technique attribute will have more generous windows. The reflex demand here is a little surprising, but it’s a nice change of pace given that in games like Smash Bros. and other Mario sports games, ultimate-style abilities are typically very simple to execute, and often guarantee you a point. We suspect that Battle League’s strong focus on online multiplayer and its ranked league mode has something to do with this.

That demanding timing skill check isn’t exclusive to Hyper Strikes, however. In fact, each and every kicking action in the game has an associated, arcade-style timing mechanic tied to it which determines how accurate or powerful your actions are. This is where much of the complexity and mental load comes into play. – including in shooting, passing, and lobbing the ball.

Simply tapping the button will perform your action, but holding the button will charge a fast-expanding coloured circle underneath your character. Let go at the precise moment the circle fills the white outline, and a high-powered shot with a greater chance of getting past the goalie is what you’ll get.

Timed charges also apply to tackles, which have a great chance of knocking an opponent off their feet, especially if they’re stronger than you. It’s also worth noting that you can tackle your teammates to help them cover more ground – something which can be used as an offensive tool or simply a positional one – and a perfectly charged tackle will launch them further, with more force.

It doesn’t end there. Taking cues from character action games like Bayonetta and Devil May Cry, you can also dodge out of the way of incoming attacks, and if you time it just before an opponent’s tackle hits you, you’ll gain an extra boost of speed to create some space between you and them.

Even more still – the charge and perfect timing mechanic also applies to on-field tactics involving other characters. Pass the ball to another character, and you can immediately start charging the receiver’s follow-up technique, meaning you can execute a ‘perfect pass’ to deflect the ball back for some tricky misdirection, or have a high-powered shot ready to go. When playing solo, this requires some forward thinking, a very quick double-tap-then-hold of the buttons, as well as precise timing on the other end of the pass.

Add to this the introduction of optional gear for the mascots – incredibly over-the-top costumes which can completely alter the balance of strengths and weaknesses of a particular character on the field – as well the need to constantly keep on top of which character you’re controlling on the field… like we said, it can be a lot to think about.

So yes, Battle League is hardcore in both aesthetics and mechanics. With all of these mechanical complexities, a seemingly high skill ceiling, and much attention being put on its online ranked league, it’s easy to see the game attracting the same kind of devoted, long-term, and high-skill player base as something like Super Smash Bros. Ultimate. Speaking as someone who is always lured in by the prospect of skill-based 1v1 competition, Mario Strikers Battle League is a dangerously intriguing game.

A ‘First-Play’ online demo will be available for Nintendo Switch Online members to play prior to launch. It will include an offline training mode, as well as online quick play during one-hour slots at the following times: