Choo Choo Charles is a survival game about upgrading a train, and using it to fight an Evil Thomas The Tank Engine that terrorises the land.
Leah J. Williams 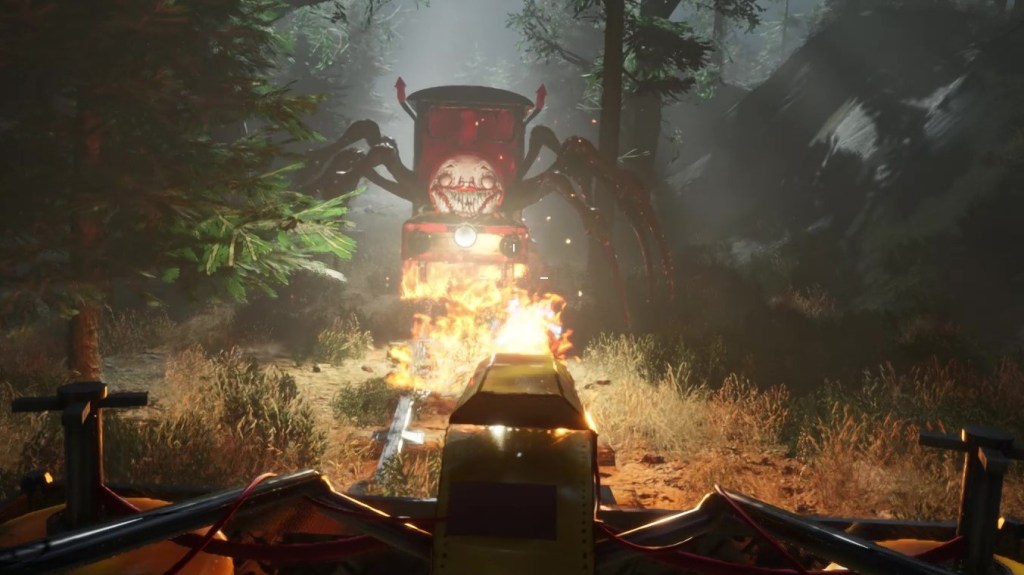 In Choo Choo Charles, your only job is to travel a lonely island in an old train, upgrading its parts and enjoying your life – until your peace is interrupted by Charles, the killer hybrid spider-train with a taste for human blood. That’s right, this is a game all about a horrific, man-eating version of Thomas the Tank Engine – hooray!

As part of Summer Game Fest: Day of the Devs, Choo Choo Charles was shown off in a new trailer, one that displayed all the stomach-churning moves that Charles can pull off to draw you and your rickety train closer into his gnarly web.

Each track you travel in this game will be ‘treacherous’, according to a press release, making it essential to plan each of your missions well. If you wander too far off the path, you may be ambused by Charles-loving cultists, or Charles itself will be waiting to gobble you up with his long, stretching spider-legs and fang-filled mouth.

The only way to survive his wrath long enough will be to journey away from the comfort of your home train to salvage loot and scraps that can upgrade your vehicle enough to eventually take on Charles in a train-spider battle for the ages.

The townspeople around you may be able to help you fend off Charles, but given everyone lives in fear of this rickety, flesh-gobbling train, it’s unlikely you’ll get too much help on your journey to save the world. By whatever means necessary you’ll need to scrape and claw together enough material before you wind up in your endgame battle with the the monster-to-end-all-monsters.

‘Nobody knows where he came from, but they know why; to eat the flesh of puny humans,’ the game’s press release reads. ‘You have a small yellow train, with a map, a mounted machine gun, and an exquisite collection of bobble-heads on the dashboard. You’ll use this train to get from place to place, while you complete missions for the townspeople, or loot scraps from around the island.’

This action culminates in a deadly battle with ‘the great and mighty Charles’.

Whether you win or lose will depend on your wiles, the aid of the townspeople, and not losing focus on that hideous, grinning spider-train. No matter where you go, Charles will be waiting – it’s just a matter of steeling yourself for the final showdown.

Choo Choo Charles is to set to launch for PC, PlayStation X and Xbox Series X/S in future. No firm release date has been provided, but you can follow development of the game on Twitter, TikTok and YouTube.