Car Kirby has been modded into Mario Kart 8 Deluxe 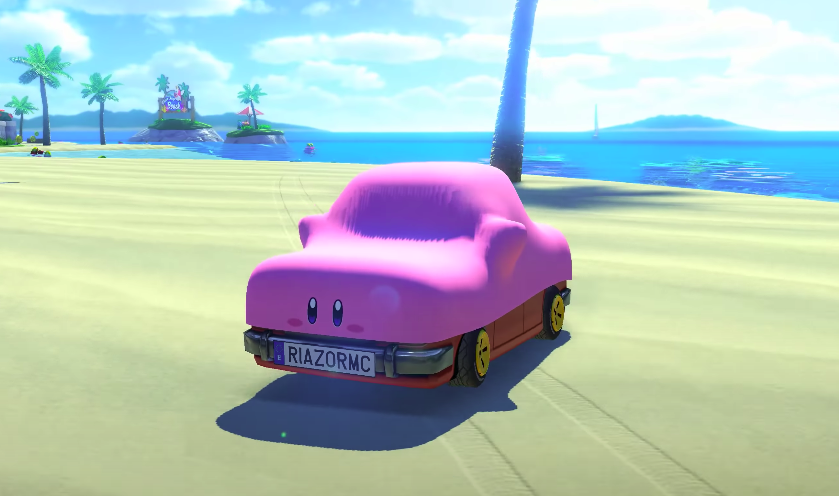 Nintendo shocked the world in mid-February when it announced ‘Mouthful Mode’ for Kirby and the Forgotten Land during the first major Nintendo Direct for the year. It’s fair to say nobody expected to see beloved pink blob Kirby wrap his mouth around an entire car, or a traffic cone, or a giant ring to save the world – but it didn’t take long for everyone to fall in love with his new, very weird, forms.

Car Kirby – AKA ‘Carby’ – was perhaps the most popular of these forms, with fans quickly obsessing over Kirby’s unbelievable elasticity and the way his eyes and pink cheeks fold over the hood of unsuspecting cars. It’s extremely strange, but also somehow cute.

Not only has he kicked up a furore online, but Carby now has another another achievement to his name: he’s joined Mario Kart 8 Deluxe, in the form of a fresh new mod from RiazorMC.

In a YouTube video that swiftly followed the Nintendo Direct, RiazorMC posted clips of a freshly-recreated Carby doing laps in iconic Mario Kart 8 tracks. Cheekily titled ‘Mario Kart 9‘, the video gained enormous popularity in a short timeframe, with fans in the comments clamouring to see more of Car Kirby in action – and to see him officially join Mario Kart 8 Deluxe.

The best part of the entire video might just be Kirby’s little pink feet sticking out of the rear of the car as he goes careening across Rainbow Road, Cheep Cheep Beach and Bower’s Castle without blinking once. It’s adorable and terrifying, and we can’t wait to see more.

Given the speed of the mod – uploaded just two days after Carby made his official debut – the results are pretty stunning, and they make an effective case for why Kirby should absolutely join the Mario Kart lineup in future. 48 new courses are on the way for Mario Kart 8 Deluxe already, and there’s no reason why Carby shouldn’t get a chance to join in the fun as well.

At this stage, there’s no plans to make this delightful crossover happen, but at least we’ll always have this mod to remember Carby fever by. He’ll make his next major appearance in Kirby and the Forgotten Land this March.