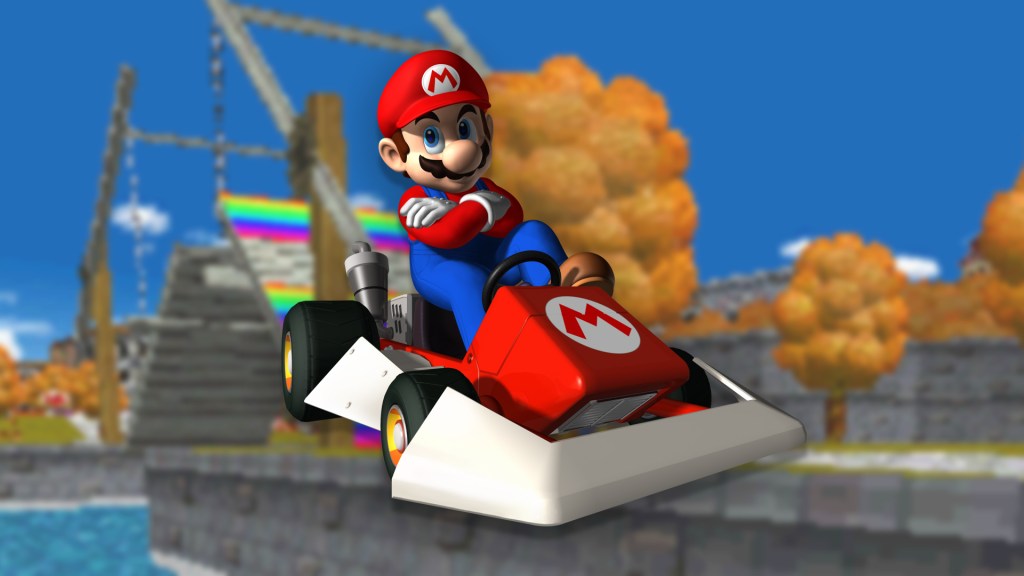 Mario Kart 8 Deluxe is a great racing game – and it’s about to get even greater, with the addition of 48 new courses over six DLC waves dropping every few months until 2023. As announced during the latest Nintendo Direct, these courses will include a number of returning tracks from past games on the Nintendo 64, GameCube, DS and Wii – and even include some tracks from mobile game Mario Kart Tour. Whatever tracks they include, Delfino Square, which originated in the Nintendo DS version of the game, must be included.

It’s not just speed that’ll get you into first place in Delfino Square, you’ll also need to employ strategy to figure out which paths are the quickest, and how you can cheat your way past your opponents. Unlike other courses, it’s far less linear – which is what makes it the most interesting and unique Mario Kart course by a long mile.

In the centre of the course, you’ve also got to contend with a constantly moving rainbow speed bridge. If you’re up the front of the pack, you may end up getting a boost when the bridge is at its highest. If you’re flagging behind, the bridge will be flat and provide a far less helpful push.

It’s all about careful timing, planning, and making sure you’re using the drift properly to navigate the level’s tight city corners.

Delfino Square is a fantastic track, but it didn’t make the cut for the original version of Mario Kart 8 on the Nintendo Wii U or its Deluxe edition on the Nintendo Switch. The latest time anybody saw it in was in Mario Kart Wii – and that’s a real shame. It looks great, it plays great, and it hails from one of the best Mario Kart games around.

While Mario Kart 8 Deluxe is inarguably the best game in the Mario Kart franchise, the DS version is so packed with brilliant tracks and characters that it almost gives Deluxe a run for its money. Delfino Square is just one example of the many great levels in the game – but there’s plenty more where it came from.

Iconic levels like Tick-Tock Clock, Wario Stadium and Cheep Cheep Beach, which featured in Deluxe, all came from the DS version of the game. With 48 new tracks on the way, it’s highly likely more DS courses will be added to the Nintendo Switch game – but only time will tell which courses make the cut.

There’s certainly hope for Delfino Square, which remains a fan favourite – and other tracks like Waluigi Pinball, Airship Fortress, Peach Gardens and Yoshi Falls should also get a look-in. Courses from the Wii, N64, SNES, 3DS and GameCube games are still worthy – but it’s hard to make a case against Delfino Square.

It’s a level that deserves far more justice than it’s getting.

Go on, Nintendo. Do the right thing, and give us the remastered Delfino Square course we deserve.

The Mario Kart 8 Deluxe Booster Course Pass is available to pre-order on the Nintendo eShop now. It costs $37.50 in Australia, and can be accessed for free if you subscribe to Nintendo Switch Online + Expansion Pack.