Marvel’s Guardians of the Galaxy has great breast physics, and should be applauded 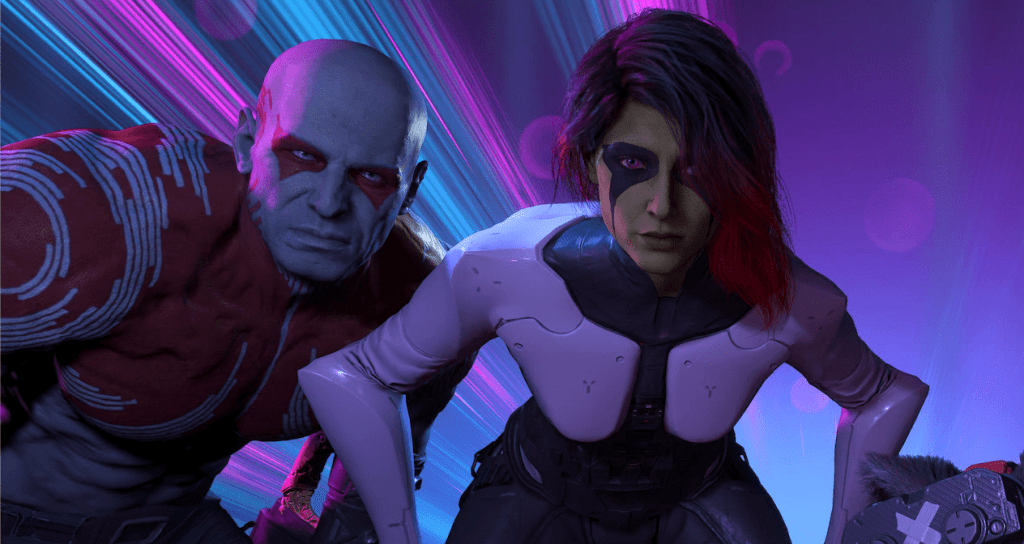 Breasts are strange things. They’re solid, but liquidy — and they move with a pendulous rhythm, unless they’re restricted in a bra or binder. Games developers love depicting breasts, although it’s rare they get them right. Too often, breasts are larger and bouncier than they should be. They fly across screens with an impossible fervour or bob like they’re part of a great ocean current. There’s a swing and a rhythm to breast movement that seems impossible to get right, but Marvel’s Guardians of the Galaxy does far better than most.

Now, breast physics aren’t the point of the game, obviously. It’s a spacefaring adventure filled with twists, and driven by deep relationships. But they do operate in the background, and they operate correctly. That’s very refreshing to see.

Traditionally, women’s breasts in games have had, frankly, insane physics. The Saints Row series, for example, features some wild and uncanny breast physics of the ‘jumping’ variety, where they seem to leap off the screen with every twist and turn. Anime titles like Dead or Alive, Sword Art Online and Soulcalibur go bonkers with breasts that seem to have a life of their own.

While it can be fun, it’s rarely sensible. Sometimes, that’s fine — video games should be fun, and there’s no reason why they can’t be sexy and over-the-top. Sometimes, they’re also very, very distracting.

But the real problem lies in the equality of breast physics.

While women’s breasts are allowed to duck and weave on screen, it’s rare that men get the same treatment. Too often, the male pectorals are hidden beneath stiff armour or in character models with no give. Even shirtless, they’re often woody planks with no hint of moving muscle or sinew.

But like women’s breasts, male pecs bounce and wobble — even if we’re rarely allowed to see them.

In Marvel’s Guardians of the Galaxy, Drax is a rare exception.

Here, his character model is filled with detail. You can see the cracks and crevices that line his skin, and thicker muscles that prop up his muscled frame. Everything moves in harmony.

When he leans down, his skin sags in some places, and ripples in others. When he turns, his pecs glisten and bounce with the same rhythm and care usually devoted to the female body.

Even in battle, his pecs bounce and move as he throws his body across the battlefield.

In contrast, Gamora’s breasts are firm and don’t move within her battle armour.

Both sets of physics make sense for each character and their combat style. Drax is a proud warrior who uses brute force to push his way through battle. His physique is free and proud, and represent his devotion to fighting, and sculpting his form.

Gamora’s body is more lithe, and her full-body suit helps her stay aerodynamic and sleek as she glides through combat with quick movements and slashes. It doesn’t make sense for her to have overt breast physics. She’s a warrior who focuses on stealth.

It’s a subtle touch, but one that works for both characters. It’s also incredibly refreshing to see.

Breast physics are a fun and ridiculous part of modern video games. Some developers avoid these physics entirely out of fear — they can be misconstrued as being objectifying. But the fact is, breasts aren’t solid objects. They move with muscles and breaths and yes, they wobble and bounce.

It’s not just women that are at the mercy of gravity, and it’s great to see Guardians of the Galaxy applying that principle to Drax. He’s a power fantasy — but his wobbling pecs make him a far stronger, more realistic, and sexier character and breast physics have a big part to play in that.

It’s high time all developers got on board the male breast physics train. In the grand scheme of things, it’s a minor feature in Guardians of the Galaxy — but it’s a touch that makes its world more believable.