Disney Dreamlight Valley, with its several generations' worth of Disney characters, pivoted my perspective on pretty princesses.
Stephanie Eslake 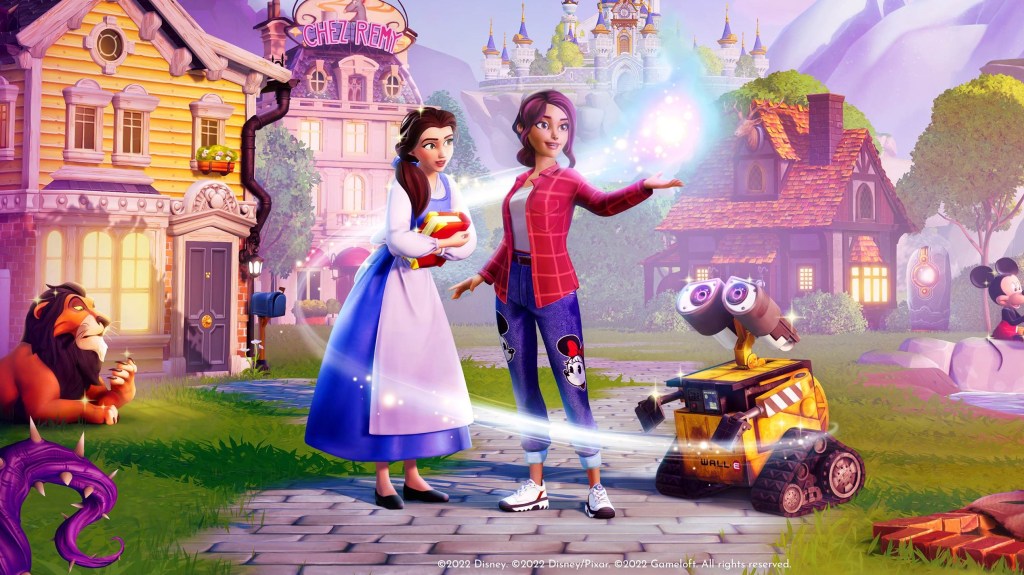 I never wanted to be a Disney princess.

Nothing good ever seems to happen to them, and they aren’t particularly inspiring role models. Belle’s experience in Beauty and the Beast feels like a case study in Stockholm syndrome. Snow White’s claim to fame is passing out from a poison apple, and waking up from a prince’s kiss. Jasmine is at the mercy of arranged marriage laws. Admittedly, I did admire Ariel’s magnificent voice in The Little Mermaid. But at the end of the day, many classic Disney princesses appear to be women dressed in beautiful gowns who are saved by, or tasked with saving, men.

Whether I’m stubborn or cynical, I wasn’t expecting to change my perspective when I started playing Disney Dreamlight Valley on Nintendo Switch. The concept simply had me curious: a large-scale game that would bring together a generation’s worth of Disney characters, all interacting on the same screen.

What sort of princess would I be?

Setting myself up, I cringed at the silly facial expressions of my avatar – the mock frown of determination, the wide eyes of innocence. The character design is pulled straight from every Disney film since the late 1980s. But I quickly warmed to the idea that this was not a film, and I was no longer the passive one here: I was taking the first steps towards the slow-burning narrative of a princess whose destiny I could control.

I put in a lot of effort to select the style that would reflect me, if I were a Disney princess. After a few hours of playing, I found myself in a shop (run by Scrooge McDuck), bursting with excitement over a ballgown – white, off the shoulder, and embroidered with colourful flowers. I purchased it immediately.

It bobbed and swayed as I frolicked through the Peaceful Meadow, and I felt something click in my mind: I ‘got’ the Disney princess fantasy. It was magic.

This is when I became thoroughly invested in the story of Disney Dreamlight Valley – an emotional rollercoaster fuelled by nostalgia, guilt, and love.

Part of their world

In Dreamlight Valley, the world is overtaken by Night Thorns – prickly growths that infest an otherwise idyllic village. They’re remnants of the Forgetting, a phenomenon that impacted all the valley’s inhabitants. Some were driven away, unable to find their way back home (like Minnie Mouse, who for much of the game looks like a mirage until you recover her memories and reunite her with Mickey Mouse).

As the player, you are the hero who has come to save Dreamlight Valley. The characters – from Goofy to Moana, WALL-E to Elsa – make you feel special for being there. They help you work towards the goals of the game: destroying the Night Thorns, bringing home lost characters, recovering memories to restore the village, and defeating the Forgetting.

I fell in love with these characters almost immediately, regardless of my familiarity with their origins. Merlin, for instance, is a wizard from The Sword in the Stone, which I’ve never seen (but now intend to). I felt driven to complete their quests and save the valley – and I was going to do it wearing pink heels, purple eye shadow, and an outrageously puffy dress.

It’s not hard to identify the Dreamlight Valley metaphor: the Forgetting is the experience of every player who has grown out of Disney.

This is not a game for children; it is a game for the abandoned inner child.

In many ways, the game does feel like the dream of its namesake. The faintest hints of an old melody will fade in and out of the soundtrack, like recalling a faraway moment that may or may not have been real. (You can’t quite remember which films each snippet is from; you must keep searching until they sound less fuzzy around the edges.)

As I progressed through the story, my emotional attachment grew stronger. The game is manipulative, dredging up one of the strongest of all adult emotions: the yearning for a childhood lost. It conjures innocence, then triggers the regret of turning our backs on our younger selves. It reminds us of long-lost dreams, then promises to help us restore them.

Plot twist (with a spoiler)

A major plot twist is delivered by Mother Gothel (the Cher-lookalike villain from Tangled, another Disney film I’ve so far managed to avoid). In the mysterious Glade of Trust, she informs me that I am the ruler of Dreamlight Valley. I have always been the ruler.

‘Long ago, you reigned over these lands,’ she states. ‘And you made a ridiculous number of friends. But then you started to change. And one day – poof! You disappeared without a trace.’

Mother Gothel tells me the Forgetting started while I was gone. Suddenly, I am tripping with guilt: how could I have forgotten? Or, to pursue the real-world connotations, when did I abandon my inner child?

When did I forget the joy of hitting ‘play’ on the VCR and belting out Part of Your World from The Little Mermaid, rewinding the tape over and over? When did I take for granted the experience of watching these animated films with my dad, who loved Disney and probably held his own childhood memories of The Jungle Book, and his parents’ of Fantasia, because this world is multigenerational – a never-ending story?

Waking up to Dreamlight Valley

It doesn’t matter if you’re a fan of Disney or not, because these feelings are so cleverly manufactured through the game. You believe. You feel grief for letting go, and shame for allowing yourself to do so. Then you’re told it’s not too late – you can redeem yourself, if you continue playing; if you nurture your relationship with Disney.

I was a serious child. So, as an adult, Disney Dreamlight Valley has me questioning: did I miss the bigger picture of the Disney princess?

Classic princess Ariel turned her back on her family, her home, and one of the most essential parts of herself: her voice. It’s not as though her love interest Eric fell head over heels for a princess who physically couldn’t speak her mind (we could read so much into this); he was constantly longing for the vision of a singing woman who could express herself. Perhaps the bigger picture is that Ariel acted on her own, guided by her inner strength and sense of adventure, making difficult decisions and personal sacrifices with nobody there to help her.

And Belle? Sure, she had a questionably close encounter with Stockholm syndrome – but she too was a Disney princess who knew who she was. She rejected toxic masculinity (in the form of Gaston), and educated herself with as many books as she could get her hands on.

As the women of Disney come of age, they break the rules to choose their own destiny. (Even if that destiny so often leads to a ‘Prince Charming’ husband.)

Now, in my early 30s, I’ll finally allow myself to step into the dream that as a child I rejected: to become a Disney princess. I’ll run around Dreamlight Valley to save the day, wearing a pretty gown while digging up carrots from the dirt, and mining for stone with a not-so-feminine pickaxe.

I’ll choose to forget my old approach to the Disney princess, and instead focus on the bigger picture: these women are heroes, and I get to play as one of them.

Steph Eslake is an arts journalist with an Animal Crossing addiction. When she’s not clocking up serious hours on her Nintendo Switch, she’s writing about classical music and art for publications such as The Guardian, ArtsHub, and her award-winning magazine CutCommon. Steph is now producing a book to teach others how to hack the field of arts communication.