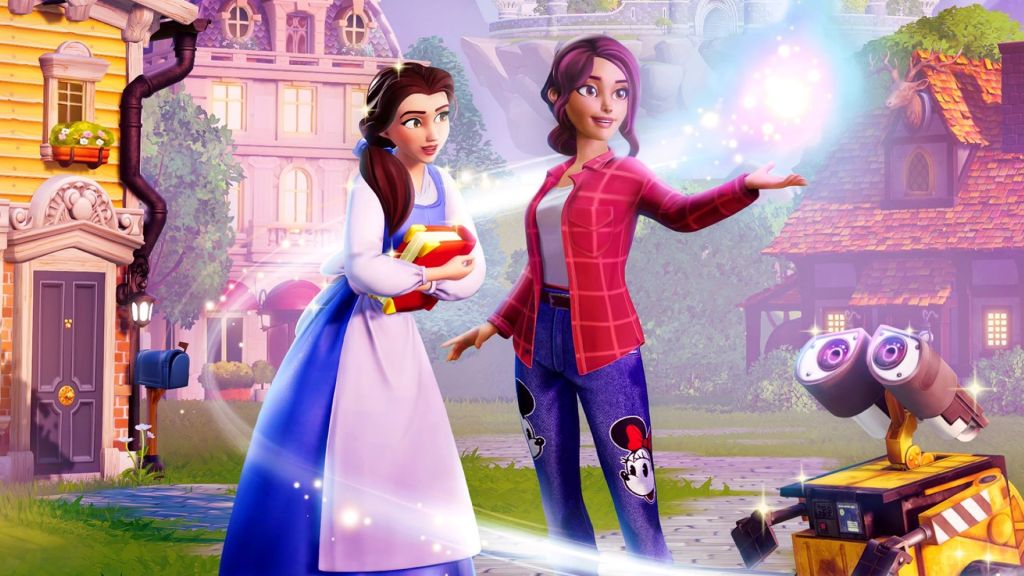 For the past month, Disney Dreamlight Valley has taken over my life – in the best way possible. When I feel myself falling into a mental health slump, playing the right game can be the antidote. The feeling of achievement that comes from completing small goals on a quest list gives me the little boost I need to start being productive IRL. Throw in some positivity, cute aesthetics, wholesome characters to befriend, and you have a near-perfect remedy for a better mindset.

This isn’t a hot take – a lot of games are designed to help you rest and reset, particularly the influx of feel-good life simulators we’ve seen over the past couple of years. But I’ve found few that do it as well as Disney Dreamlight Valley. There’s genuinely nothing to stress about in this game, and that’s exactly what I need in my life right now.

Dreamlight Valley is a cosy life-simulator, crossed with an adventure game, about living in a valley filled with iconic Disney characters. The valley was once lively and prosperous, but when ‘The Forgetting’ crept in, spreading Night Thorns everywhere, its inhabitants either lost their memories or disappeared. Conveniently, you possess the magical powers to banish the Night Thorns, and restore the valley.

Despite the ominous presence, a day in Dreamlight Valley offers several opportunities for relaxation and discovery. There is an excellent balance of zen tasks, like exploring and collecting resources, as well as more involved ones, like questing and interior design. I often find myself zoning out, wandering around picking and selling flowers, before realising I’ve been playing for an hour without touching any quests – but enjoying every second of it.

There’s an endless supply of tasks – mining, foraging, growing crops, fishing, digging up treasure and hunting for chests, to name a few – that contribute both to your quest progress, and your finances. You can use the resources you’ve gathered to cook detailed recipes, craft new items, or just sell them for quick cash. Goofy will usually cut you a good deal at his vegetable stall, so it feels achievable to save for a quest objective, a new outfit, or a house upgrade.

Scrooge McDuck owns a large store in the plaza where you can find a variety of Disney-inspired clothing and furniture items. He immediately sucked me into spending my hard-earned coins with the options for customising and expanding my house, even though I also needed to spend them on building houses for the growing town population.

I was initially surprised by the level of customisation Dreamlight Valley offers. There are a wide range of options for changing your appearance, clothing and home, allowing you to make your character and their living space feel unique. There’s a huge catalogue of items to buy, loot or craft, with some impressive design work going into them.

Further, the entire valley can be built and decorated to your liking – provided you have the funds to pay Scrooge’s construction costs. You can move buildings, plants and furniture pieces anywhere you choose, so no two Dreamlight Valleys are alike. Over time, you unlock new Disney characters who can be invited to live in the valley once you’ve helped them with a quest. This lightens up the town, and allows you to befriend more folks.

I was delighted to find the Disney characters in Dreamlight Valley don’t feel one-dimensional. The dialogue is genuinely interesting and often funny, particularly with Merlin, who acts as your chief adviser in bringing the valley back to life. The valley’s inhabitants make jokes and share their feelings, reference their past experiences, their relationships with each other, and their sadness at The Forgetting taking over. The expanded characterisation of these familiar faces exceeded my expectations, with my experiences in Dreamlight Valley adding to the picture I already had in my head, making each character even more endearing.

As a childhood Disney and Kingdom Hearts fan, the character and aesthetic choices, along with the restrung instrumentals of classic Disney songs immediately pulled me back into the universe. The world has a pleasant familiarity, but it’s not so familiar that it feels stale. The level of Disney kitschiness could potentially be too much for those unfamiliar with the brand, but there is more value to the experience than just fan service.

Quests are surprisingly in-depth, with your quest log being divided into main, side and level-dependent friendship quests. They usually require you to complete several tasks, or collect multiple items. This takes a little patience and multi-tasking, but going through the motions of these tasks is exactly what keeps you coming back.

Dreamlight Valley’s world design is also effective at encouraging you to keep playing – new areas seem like they’re just out of reach the whole time. On more than one occasion, I caught myself peeping over the rock wall that blocked off the as-yet-unreachable Glade of Trust area, eager to pick fruits that I didn’t recognise. New realms and map locations can be unlocked with a magical currency called Dreamlight, earned by performing life-sim activities. In practice, it’s an ever-tantalising carrot-on-a-stick.

As with any game built around a free-to-play model, there are incentives to come back daily, though at the time of writing, I feel Dreamlight Valley manages a good balance. You can ask characters a new question each day that helps you grow your friendship level, and the items in Scrooge’s store change every 24 hours, but I’ve found that I can play for long periods without coming up against hard barriers – you won’t find any countdown timers here.

Disney Dreamlight Valley is slated to be free-to-play for everyone in 2023, but those keen can access it now through Xbox Game Pass, or buy into the Early Access phase on other platforms. Overall, I feel very good about investing my time into Dreamlight Valley at this stage.

Even in its early access state, Disney Dreamlight Valley nails the cosy game formula. It’s such a treat to play, and offers a refreshing, peaceful refuge. It recaptures some of that elusive magic and wonder I felt from the Disney franchise as a kid, and it has brightened my world at a time when I needed it most. I can see it being my companion for a long time to come.

The Xbox version of Disney Dreamlight Valley was played through Xbox Game Pass for the purposes of this review, with additional testing also performed on PC.