Digimon Survive is a dynamic visual novel that closely aligns with the action of the anime series, and features rather nifty combat.
Leah J. Williams 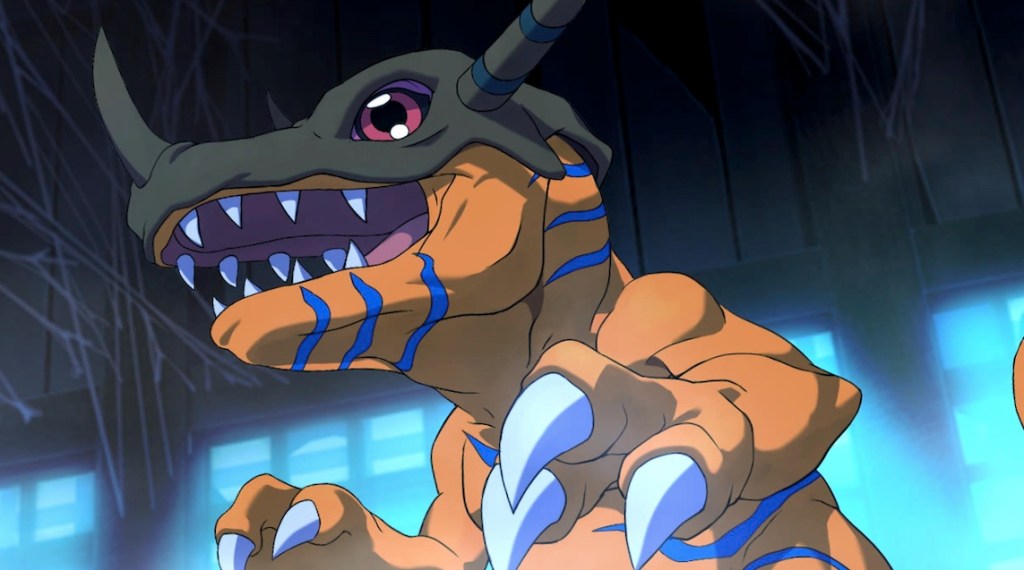 Digimon Survive suffered from major delays, and a truncated marketing cycle that largely buried its release in early August. You’d be forgiven for not knowing the game had launched at all, with few whispers about the title doing the rounds online – but the good news is the game is here, it’s available on most consoles, and it’s actually fairly good.

Ahead of its launch, there was a lot of chatter about Digimon Survive. But with early trailers and marketing focussing solely on the game’s turn-based strategy battles, the actual crux of the game was misunderstood. While Digimon Survive does feature turn-based combat, it’s actually a rather dynamic visual novel that feels inspired by the Digimon anime series – specifically, the iconic first and third seasons.

As the main character Takuma, you’re thrust into a mystical new world filled with odd beasts known as Digimon, with friends and acquaintances from your school at your side. There are elements of horror in the game’s story – particularly in its early stages, which feature haunting tracks and spooky creatures – but for the most part, the game is about making friends, developing the skills of your Digimon, and finding your way through a strange and terrible realm.

[Editor’s Note: Welcome to what we’re calling a Review Snapshot. Time is short, there are too many games, and a lot of those games are very long. With a Review Snapshot, we want to share an assessment of a game that we haven’t played in its entirety – and thus can’t review as a whole work in good faith. But these assessments will be based on a significant chunk of time with the game, and aim to give you a good idea of whether you might be interested in sinking a similar amount of time into the title yourself. Let us know what you think about them by tweeting at us.]

The first five hours of Digimon Survive play out at a slow, measured pace. The early prologue introduces the horror-tinged action, with two children wandering a foggy forest, and eventually being sucked through a strange portal. Following this, the action switches to the present day, where protagonist Takuma and his classmates are preparing for a school trip to an ancient shrine.

The main characters – Takuma, Minoru, Aoi, Shuuji and Ryo – banter, in visual novel-style scenes, with the player’s role being to choose dialogue options that may impact their character alignment. Speaking with certain characters more than others will increase your relationship with them, and this later has an impact on the main story.

After a brief set-up, your loveable and gorgeously-rendered cast sets off towards the ancient Kemonogami temple, where a strange rift opens up and transports your pals to the digital world, a place occupied by odd glitches, and strange creatures.

Eventually, the new Digidestined discover they’re in an alternate world filled with creepiness, and ruled by powerful, dark forces. From there, it’s up to them to escape this world, build their bonds with their new Digimon friends, and prevent the total collapse of reality via turn-based strategy battles. Unfortunately, some will die in the process – a fairly dark turn for traditional Digimon games.

I was extremely surprised by Digimon Survive, largely because of the game’s confusing marketing campaign. With a focus on turn-based strategy battles, it was easy to think the game would be a flashy, action-focused adventure, potentially leaning into survival mechanics. Instead, it’s a slowly-unfolding visual novel that prioritises character relationships, exploring static scenes, and occasionally hopping into a strategy battle when dark foes present themselves.

There’s a lot of dialogue in Digimon Survive, and the story feels very slow-paced, with each cutscene including multiple characters, and multiple dramas. The opening is particularly glacial, with each character taking an age to meet their Digimon partners and get the action going. That said, the game warms up considerably once you get through the tedious opening stanza and its many, many tutorials. Once you’re beyond this, you’ll find a dynamic narrative buoyed by clever battles and nuanced horror twists.

Read: Digimon World is being considered for a remake or port

Major battles are featured throughout Digimon Survive, with each operating on a strategy grid. If you have enough relationship with your partner Digimon (you start with an Agumon, and your friends start with Falcomon, Labramon and Kunemon) you can Digivolve them for more powerful attacks and better range, which helps you cross the battlefield and take down foes one at a time.

The wide battlefield of Digimon Survive is a massive boon. When taking down enemies, you’re often placed at opposite ends of a grid, meaning you have time to plan and re-plan your movements. If you move into the range of an enemy Digimon, you’ll likely suffer an attack. But if you think about range and land outside it, you can avoid damage and use your next turn for a more powerful blow. There are elements of Fire Emblem in this design, with clever plays available for those who think outside the box and understand every tool in their arsenal.

There are also some surprising Persona and Shin Megami Tensei elements in the game, with players able to court other Digimon by answering three questions. Choose dialogue options that align with these Digimon personalities (a knowledge of the franchise helps here) and you can ask them to join your team. In this way, you can build up your strength and collect all your favourite Digimon to use on the battlefield – I managed to nab a Biyomon and Gazimon early on, which greatly helped my fighting chances.

The strong combat offering is only slightly dampened by the game’s slogging dialogue. The story itself is extremely interesting, with dark narrative twists, and it plays out exactly like an arc of the original Digimon series. Unfortunately, there’s a massive element of ‘tell, not show’ in the action, with every choice and narrative beat needing some form of truncated discussion between your friends.

There’s a ‘skip’ button that makes the visual novel aspect faster-flowing, but its existence is fairly damning. It also forces you to skim through dialogue that feels important, skipping whole chunks of the game’s lore.

There are moments where Digimon Survive absolutely shines in both combat and narrative, but the slower pace is frustrating and holds back the meaty, twist-filled action.

Will I enjoy Digimon Survive?

Digimon Survive is an odd duck. Fans of visual novels will love the dynamic cutscenes, and the way the action shifts. The game feels like a living cartoon, and each story beat will feel both enticing and familiar to fans of the anime. But these fans will likely begrudge the tactical strategy elements. Likewise, turn-based strategy fans will likely take issue with the game’s plodding visual novel style.

There’s certainly a sliver of the gamer Venn diagram that will enjoy both elements, but the game’s split focus is a real oddity. It’s an adventure of two halves, and while both frequent shine in tense narrative moments and darker turns, it’s still an experience that feels at war with itself.

The gnarly narrative hooks in you eventually, but the early stages of the game are difficult to parse, and require dedication to get through. If you can stomach the stereotypical and over-written dialogue, you’ll find a shocking and emotional tale that gets as dark as Digimon does. But you will need to conquer those relationship-based mechanics and filler-ish exploration scenes before you get to the real meat of the adventure. There’s certainly gold on the horizon, largely found in the game’s excellent combat system, but Digimon Survive makes you earn it with a hefty dose of patience.

The PS4 version of Digimon Survive was provided and played for the purposes of this review snapshot.