The portable device, which takes major cues from the Nintendo Switch, will reportedly run the countless games available on the Steam storefront with no issue.
Edmond Tran 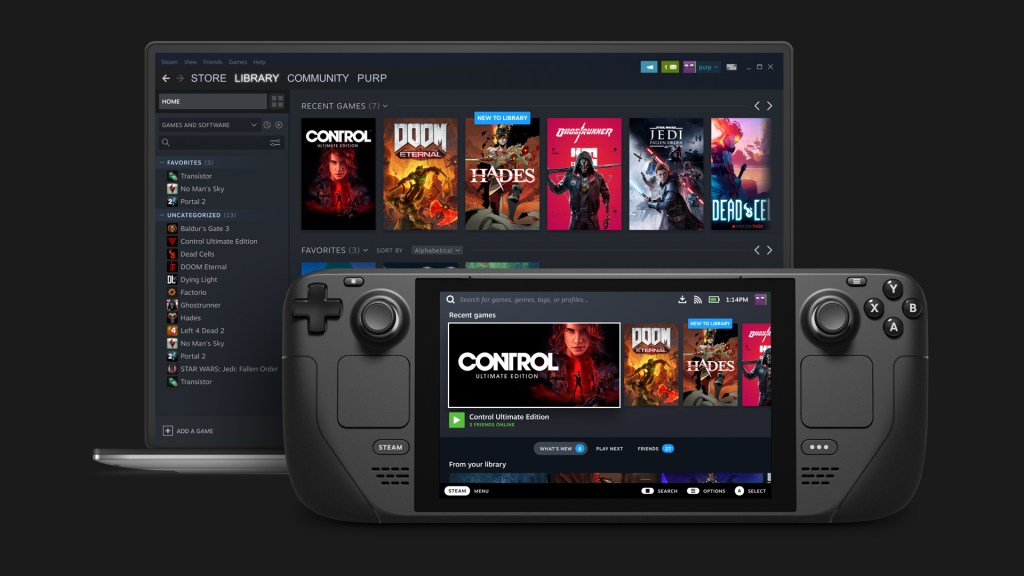 Valve Corporation, the games industry behemoth behind the Steam digital storefront on Windows and Mac, as well as seminal titles Half-Life, Counter-Strike, and Dota 2, has revealed a new portable gaming console called the Steam Deck.

Taking significant design inspiration from the Nintendo Switch, the Steam Deck will run all games available on the Steam storefront, effectively making it a compact, portable gaming PC. It will begin shipping to North America, Europe, and the UK in December 2021; no Australian release details are currently available.

The Steam Deck features an expected suite of control options, including analog thumbsticks, triggers, and a series of face buttons. It also features touch capabilities on its 7-inch screen, gyroscopic motion controls, and as well as two thumb-sized trackpads to mimic mouse movements for games not designed to better interface with PC games that were never designed to use traditional game controllers.

Like the Nintendo Switch, which just had a new model announced, the Steam Deck will also be compatible with a separate dock which allows it to be connected to an external screen, as well as peripherals like a mouse and keyboard. Because the Steam Deck is a PC, you’ll be able to use it as such, installing other applications or operating systems as you see fit.

At present, three different models are being offered in the launch regions, all of which differ in the type and size of onboard storage they offer. The base model sports a 64GB eMMC drive, while the top-end model features a faster 512GB NVMe SSD drive, as well as a different type of screen glass. Storage is also expandable on all models via microSD

Valve suggests that the AMD chipset will feature enough performance to run ‘the latest AAA games in a very efficient power envelope’, and that this performance will be consistent across all variants of the Steam Deck.

How does the Steam Deck impact game developers?

Valve has stated that the Steam Deck will run all games available on Steam, and the additional control options on the device will help bridge the game where a game has not been specifically designed for controller inputs.

Naturally, it appears to run a version of Steam OS, launched in 2015 as an evolution of ‘Big Picture’ mode for televisions, so will likely take a lot of its interface and control cues from there.

Valve has stated that no specific porting for Steam Deck will be necessary, however, a developer kit program is coming soon.

Is it a game-changer?

Valve has had a mixed history with its forays into hardware. In 2015, they started a line of prebuilt computers in partnership with third-party manufacturers called Steam Machines, which aimed to create a more approachable, console-like experience for PC games. As part of this, they also released a Steam Controller, which placed its emphasis on two trackpads (also present on the Steam Deck) to make keyboard and mouse games accessible.

The Steam Link, a device that was designed to hook up to TVs and stream game content via Steam on a dedicated PC elsewhere in the home, was also released. Both these things were slowly phased out, presumably due to low uptake. However, the Steam Link streaming functionality continues to exist in the Steam Link app, which can be found on mobiles and devices such as the Apple TV.

When thinking about the Steam Deck, it’s easy to remember those relatively recent business decisions and feel hesitant. However, the audience for Steam Machines was squarely those who did not already have some kind of investment into the PC gaming space.

The Steam Deck is a little different, as its true portable qualities provide a slightly more attractive use case to the established PC gaming and Steam audience. To those not already invested, it’s a much more streamlined way to get into the space, no external screen or peripherals are necessary.

The other benefit it has is a more attractive price, at least for the base model, which is $400 USD. In an interview with IGN, Valve president Gabe Newell says that price is ‘painful’ for the company, but critical. This combined with the regular sale events on the Steam store, makes it an attractive value proposition. The Nintendo Switch currently retails for $300 USD. No Australian prices have been announced for the Steam Deck

For context, Valve’s virtual reality headset, the Valve Index, is regarded as the most technologically VR headset currently available to consumers. But it’s also the most expensive option at $1000 USD, which is one of the biggest factors stopping VR games from being more widespread.

Valve has said that more information on the Steam Deck’s release in the rest of the world will be coming in 2022.

Customers in Austria and Germany who purchased Studiocanal movies will reportedly not be refunded ahead of licensing changes.