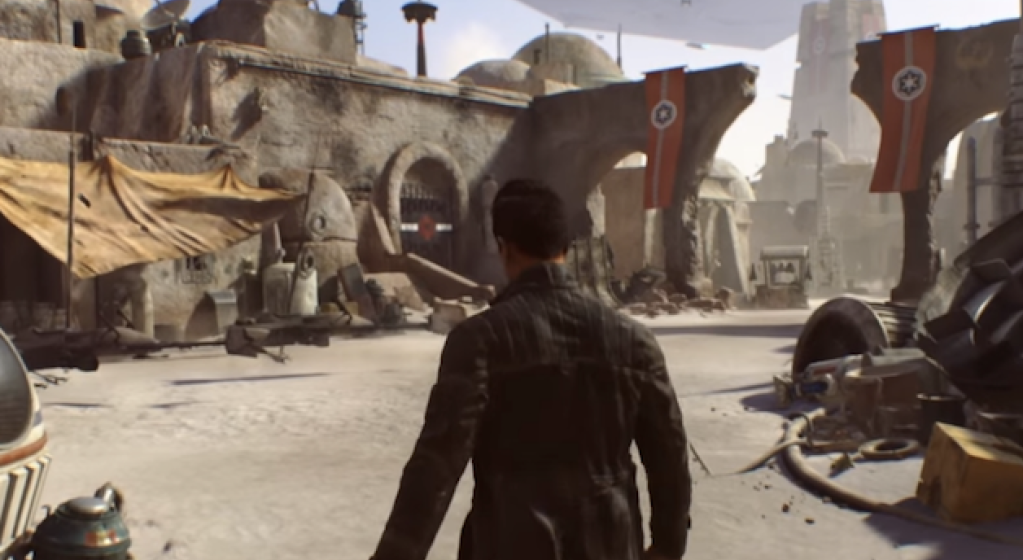 Skydance New Media has announced a brand new narrative-driven Star Wars game is currently in the works with Lucasfilm Games, adding to the impressive number of Star Wars adaptations in development. The project is reportedly an original action-adventure set in the Star Wars universe, and is being helmed by Skydance president Amy Hennig, who previously led creative development on the Uncharted franchise.

Hennig actually has a long history with Star Wars games – although not a very successful one. In the 2010s, she worked on a unique Star Wars title from Visceral Games and EA which would have followed a ragtag group of mercenaries travelling through a hostile galaxy.

Early footage showed off a mysterious character travelling through a desert town (assumed to be Tatooine or Jakku), and revealed an adventure with much promise. Unfortunately, development fell apart soon after the teaser was released with Visceral Games shutting down, and EA eventually cancelling the game.

At the time, the reason for this cancellation appeared to be a forced move away from single player adventures and linear storytelling. There’s hope Hennig’s new project will meet a much different fate as single-player, story-driven games finally get their time in the spotlight from EA again.

‘I’ve often described how seeing Star Wars in 1977 essentially rewired my 12-year-old brain, shaping my creative life and future indelibly,’ Hennig said in a press release announcing the new project. ‘I’m elated to be working with Lucasfilm Games again to tell interactive stories in this galaxy that I love.’

Lucasfilm Games shared similar enthusiasm to be working with Hennig once more, on a title that may integrate some of the core creative ideas of Project Ragtag in fresh new ways.

No information about the game was provided, but it’s clear all parties are very excited by the prospect of a new Hennig-led title. While it’s likely several years away, there’s every reason to have hope for this upcoming adaptation, particularly with Hennig and her talented team on board.

In addition to a new Star Wars title, Skydance New Media is also currently working on a mystery Marvel adaptation, which will similarly feature narrative-driven gameplay.