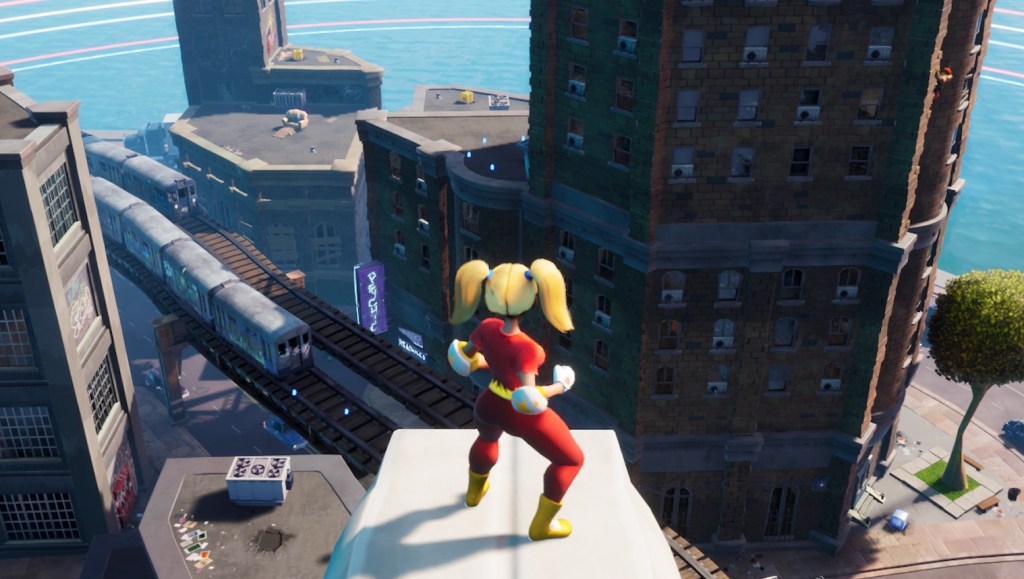 The battle royale genre is positively flooded in 2022, with numerous games begging for attention. The nature of gaming, whether as an adult or a child, is that you can only usually pick one or two ‘ongoing games’ that you’ll have time to dedicate to. These games tend to ask a lot of you – you need to grind to maintain your levels and skills, playing every day if you want to keep up with the best. That’s why launching a battle royale game is such a difficult prospect in the modern market. There are already so many games and not enough time to play them all. Rumbleverse, as of writing, appears to be a victim of this fact – which is unfortunate, given how enjoyable it is.

Rumbleverse, launched in early August 2022, is a battle royale game inspired by the world of professional wrestling. It would be reasonable to describe it as Fortnite with a melee focus – it closely resembles Epic Games’ global smash hit in gameplay and aesthetic.

At launch, there are three modes in Rumbleverse – Solo Play, Duos, and Playground. In each, you create your own superheroic character, and get launched out of a canon into a metropolitan biome.

Much like in Fortnite, this biome exists within a slowly-shrinking sphere. Every minute or so, your world gets smaller, forcing you and 39 other competitors into tighter and higher-staked battles. You can land anywhere you like on the map, and even find a hiding spot if you’re a more strategic (read: cowardly) player, with the action beginning the moment you touch down.

Unlike in Fortnite, there are no ranged abilities in Rumbleverse. If you want to K.O. opponents on the battlefield, you’ll need to get your hands dirty by jumping into 1v1 punching, body-slamming, kicking, chair-whacking and bin-smacking action.

You can start your adventures in Rumbleverse by jumping straight into the action – heading for the nearest hero, and giving them a great big wallop, or jumping off a building to body-slam them from a great height. You can also collect stars to unlock a powerful ‘Superstar Mode’. Or you can hunt down item crates in the game’s world, which can give you boosts to health or stamina that help you survive.

Four items can be stored at once, and these will help your chances for victory as other heroes discover your position and attempt to thwack you before you can make a (frog) splash.

The battlefield of Rumbleverse is fairly even, with no players gaining an unfair advantage for having better gear or playing longer. You can perfect your skills with time, however, and work on mastering the game’s simple but impactful combat – it’s essentially just hitting, blocking, using super moves with good timing, and assessing the battlefield for when you should run.

Attacks are extremely satisfying – and so clearly created with a love for professional wrestling. There are unique abilities in the game that many will recognise, and each successful super move will send you into a flashy, explosive special that really creates an impact, and makes Rumbleverse’s combat stand out.

The best part is that higher-powered abilities – which only pop up rarely, and require you to find special magazines in the game’s world – can help you can take enemies down with a single, well-placed slam. This requires patience, of course, and having time to find the right items – but the results are genuinely delightful.

My favourite trick I discovered while experimenting was unleashing a bodyslam on an opponent from the corner of a high tower. If you can grapple them correctly, you can essentially bodyslam them hundreds of metres down to the ground, causing irreparable damage, and nabbing you a swift knockout.

Unfortunately, this does work the other way, too – if you stumble in your rush to defeat other enemies, you can also get caught in devastating attacks that whittle your health away before you’re able to make a major statement. Run out of stamina or get dazed, and you’re essentially at the mercy of other, better players stringing multiple attacks together.

Plan your timing right, and you can run away to fight another day – but if you’re not hawkishly watching for a swift exit, you can quickly find yourself mashed into dust. And that’s where Rumbleverse’s major issues come into play.

As of writing, finding a match in Rumbleverse can take you anywhere between 2 minutes and 5+ minutes. That’s five whole minutes of watching and waiting on the title screen, with absolutely nothing to do. Solo Play and Duos currently average a 2-3 minute wait per round, and Playground ended up at 5 minutes before I gave up and returned to the main menu.

You can get absolutely squished in Rumbleverse within a few seconds, making this wait all the more frustrating. At several points early on, I was spending more time in the matchmaking screen than I was actually surviving in the game.

This isn’t an issue created by developer Iron Galaxy – I suspect it’s more that Rumbleverse doesn’t currently have a massive, active player base to jump into matches with. But for a game like this, waiting minutes is pretty abysmal, and will likely turn new players away – leading to even greater problems for matchmaking servers.

This problem also has knock-on impacts for the game’s other modes, with Duos frequently having issues with maintaining a full field of competitors. 50% of the time I played Duos, I was match-made with someone who lost patience and quit on me – and instead of finding a new partner for my hero (in Duos, two people work together to survive, and can revive each other), the game sent me onto the battlefield alone.

That meant I was a solo hero facing down multiple tag team partners, and that I was a massive target. Multiple times this happened, I ended up being completely squashed by two partner opponents who would take turns flattening me into the pavement. With no partner hero to defend or revive me, I was simply K.O’ed and sent to wait back at the title screen.

While Duos works great when you do get a solid partner, I was so frequently left without that I ended up spending most of my time with the game in Solo Play. This mode makes a lot more sense gameplay-wise, and also makes for a snappier and less frustrating battle royale experience.

These are teething problems that will likely be resolved as Iron Galaxy continues to work on the game. With a battle pass on the way post-launch, and a solid concept, Rumbleverse has the makings of something great. But conversely, there’s so much standing in its way – including an absolutely packed battle royale genre with so little give left.

The game’s meaty, over-the-top melee combat is a real joy, as is its City of Heroes-like explorable world, but challenges, including a scant player base, are currently holding it back. It’s a chicken-egg problem – you need solid gameplay to have new players, and new players to have solid gameplay – but it’s likely an issue Rumbleverse will need to address soon.

No amount of high-flying, body-slamming combat will make up for each game’s sluggish and frustrating wait period. When you’re exploring the city, flying high, and tracking down your next opponent, Rumbleverse is an extremely stylish, punchy battle royale game that uses its theming and combat to great impact. This Fortnite-like certainly has potential – but it needs a better leg up before it can be crowned champ.