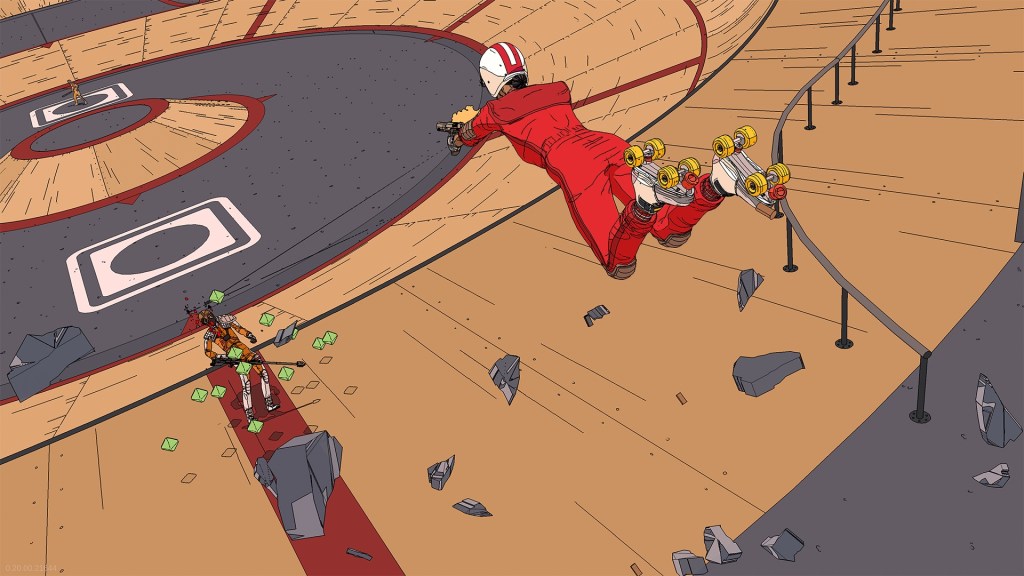 Rollerdrome, announced during the latest PlayStation State of Play, looks set to be the most stylish game you’ll play this year. In cel-shaded action and eye-popping colours, Rollerdrome will send you on a dystopian adventure where shooting and skating go hand-in-hand. This single-player game combines third-person running-and-gunning with the fluid speed of OlliOlli World in a roller rink of disaster and death.

While the game’s plot was not expanded in its early trailer, the action more than spoke for itself. It appears players will be able to pull off a number of flashy tricks in this shooter, using roller speed and obstacles to pull of daring hits. You’ll be able to flip, spin, tumble and pull off plenty of classic derby moves in this game, although it does appear you’ll need finesse to pull them off and become a Rollerdrome champion.

Given the game is from developers Roll7, who just released the excellent OlliOlli World, you can expect a whole lot of sleek and wonderful antics.

According to a press release, the game is set in 2030, ‘in a world where the public are kept distracted from an increasingly sinister political situation by the violence and excess of a brutal new arena sport: Rollerdrome. The lines between reality and performance in this bloodsport are blurred, with participants chosen to compete in a series of gauntlets against the deadly House Players.’

Kara Hassan is a newcomer to the sport, and will be the main character of the narrative-driven adventure.

You can check out the new trailer for Rollerdrome below:

‘It’s been amazing to see this project come to life from the original prototype that received a lot of love online, all the way to the brutal and intense experience it is now – thanks to the amazing work of the team at Roll7,’ Paul Rabbitte, Creative Director at Roll7 said in a press release. ‘We’re really excited for players to jump into Rollerdrome.’

You’ll be able to glide your way into the murder rink when Rollerdrome launches for PlayStation 4, PlayStation 5 and PC on 16 August 2022.