What really defines the base-building genre? We unpack Cult of the Lamb and Clanfolk to see how the spirit of RimWorld lives on through them.
Meghann O'Neill 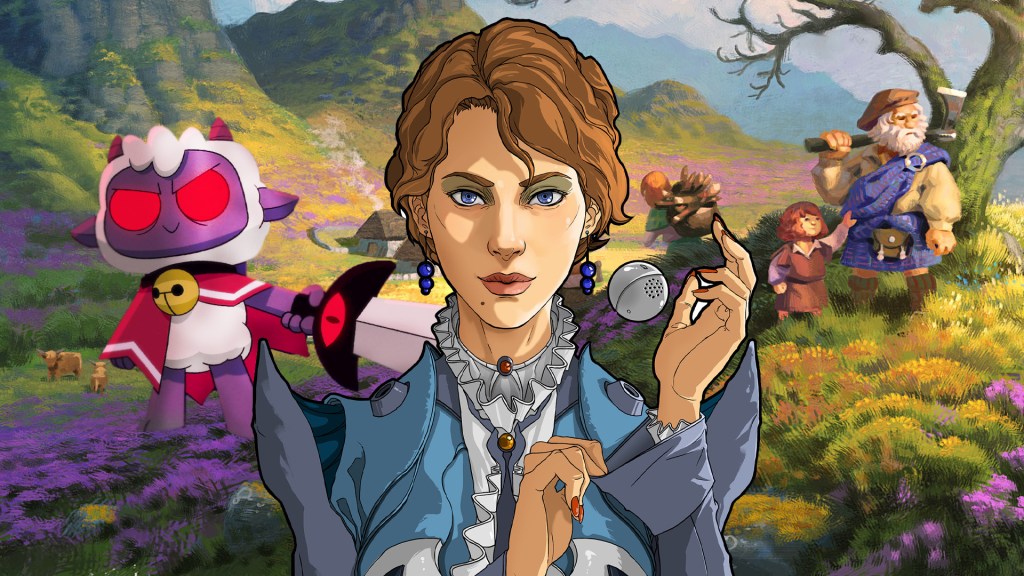 What is the outer measure of commitment to a game nowadays? 1000 hours? RimWorld is that, for me. I wouldn’t consider a single minute wasted, either, even as I ignore the occasional aspects causing me disquiet.

It’s a complicated experience, but the core formula works so beautifully; keep fed and warm, build ever-swankier abodes, defend against raiders, tweak your ‘ideoligion’ so that it becomes as peculiar as possible, tell the story of how you rescued a naked man (who was only fleeing from a squirrel) through the medium of sculpture, and so on.

A fair while ago, after buying both Rimworld expansions, I switched to the peaceful difficulty settings. With so much to do, I was no longer motivated to waste resources on defence, at least early on. A low-violence approach freshened up my RimWorld experience significantly – it felt like a whole new game.

That epiphany, as well as recently released titles Clanfolk (in early access) and Cult of the Lamb, got me thinking about the roles of combat and progression within the loosely defined, ‘RimWorld-like’ base-building genre.

Is the threat of destruction what makes your base and pawns so precious? How do self-directed goals drive the unlocking of new materials, crafting stations, and the like?

Having previously taken for granted the inalienability of RimWorld’s formula, I’m surprised by how exciting these thoughtful variations on a RimWorld theme can be.

Haste Ye Back: The absence of violence in Clanfolk

Set in the 1300s somewhere in the Scottish Highlands, Clanfolk’s setting is authentic and specific. I have learned how to separate oats from straw with a thresher, how to cure flax stems via retting, and the cultural significance of one’s tartan, among many other things. The goal is to survive, by planning for a harsh winter and considering ways to sustainably manage the local environment, including via regeneration and agriculture. If you squander the wild oats, there’ll be no brose for breakfast, that’s for sure.

Relationships with other clans are maintained via their people hanging out at your settlement, as guests or itinerant workers, but even when they’re displeased, they won’t attack or raid. You can’t get eaten by wildlife, either.

I’m not sure if such events are planned for a full release of Clanfolk, but I never found myself wanting them. Cold and hunger are rewarding enough to struggle against, especially when you consider the bairns. Yes, this game has babies, children and teenagers, who remain conspicuously absent from RimWorld. And, yes, it was terrible when a child in my game starved to death on their nocturnal journey back from the poop hole, but you can always move hygiene objects closer to town (and load your game). It’s not that bad.

Does failing to attract eligible partners mean your clan will eventually die out? Yes. And having no bairns at all is a failstate, as there is no way to move people in, apart from marriage.

In the absence of violence, I became intrigued by Clanfolk’s ‘ideas’ system. Where in RimWorld, you allocate (hopefully skilled) pawns to research, effectively rendering them useless for a time, your clanfolk will engage with their surroundings, then have a related idea. So, after they collect berries, then they’ll have the idea for a food stockpile, then a serving basket, when you also have branches and straw.

Much later, after having the idea to create iron nails, based on previous ideas about tools, mining and furnaces, they can then have ideas about floorboards, furniture and many more things that require nails, based on whether they’ve already had related ideas about planks, straw beds and so on.

Of course, it is possible to entirely break the dependency tree. One time, I failed to place the clothes crafting zone (because I thought it was a stockpile) and never had the idea to make ‘sacks’, eventually unlocking a quern, dough table and bread making oven, but having nothing to store flour in, thus no way to make bread. I had progressed via a path the developers likely just didn’t plan for, but I’m awed by the complexity of this system, nonetheless.

Clanfolk is very much like an early RimWorld aesthetically and in execution, yet what distinguishes it, as its own coherent experience, are ‘ideas’ and a lack of violence. I played it obsessively for five consecutive days, which is how I play RimWorld. I can’t wait for them to add more content.

By contrast, Cult of the Lamb seems more fun to play in short bursts, because it is firmly divided into two styles of play, which compartmentalise progression. It may be further removed from RimWorld in terms of genre, but demonstrates another clever way to experiment within the base builder formula.

Night and Day, you are the one: The ebb and flow of Cult of the Lamb

Cult of the Lamb is not, and is not trying to be, RimWorld, most obviously in terms of scope. Only one half of the game is base building; growing crops, preparing meals, harvesting materials, summoning demons, eating the elderly, sacrificing dissenters and creating a truly diabolical community of cute creatures.

There’s lots to keep you busy, like making sure the healing tent has enough flowers and chasing down thieving spiders, but control over aesthetic and structural designs are limited. Bedrooms, for example, are premade, individual pieces, like sleeping bags, tents and huts, rather than furniture being crafted from your choice of leathers and arranged just so. There are a lot of decorative items available, for the purpose of beautifying your cult, but one thing I do appreciate most about RimWorld is experimenting with layouts and materials, so it’s a shame there isn’t a little more variety here.

The other half of Cult of the Lamb is crusading, or surviving small, randomly generated dungeons. Combat involves executing the melee attack, dodge and curse in response to known monsters, based on the speed, power and abilities of whichever random gear is available, as well as collecting tarot cards for buffs. I was always motivated to embark on another crusade, just for the joy of smashing monsters.

RimWorld has improved upon its combat over time, by allowing for cleverer strategic play, even if many people still probably only engage for the promise of a tangible quest reward. Nonetheless, leaving (or playing outside of) your RimWorld colony is largely optional, except when you run out of metals or need to trade for one-of-a-kind items. And, you can always switch between home and away, if something catches alight, or a fight breaks out.

But in Cult of the Lamb, leaving the cult is a weightier decision because time marches on regardless of its lack of you. One time, I was crusading for two days and returned to find a dissenter turning cultists against me; me, their glorious leader. Starvation, illness and vomit are a given. These cultists just cannot function without someone ordering them around which, I’m sure, is how cults are supposed to work.

It is entirely necessary to leave, however, when you consider how progression is organised. At least speedrunning has a clear purpose.

The primary way to unlock new structures in Cult of the Lamb is not via research, as in RimWorld, or ‘ideas’, as in Clanfolk, but ‘divine inspiration’, purchased with ‘devotion’. Cultists spend a large portion of their time worshipping at the shrine to generate devotion, which also intersects with loyalty, faith, rituals, doctrine and everything else.

It’s a complex, interconnected system with a lot of moving parts, but the ultimate takeaway is that crusading is essential to maximising devotion and collecting the materials to build out your base in Cult of the Lamb effectively. Unlike in RimWorld, the fighting part of Cult of the Lamb is intricately woven into the design from the very beginning, even though the focus is on your cult. It can actually make the base building part even more intense – it can be really hard to leave your needy followers behind.

I will survive… without Rimworld

I’ve been obsessed with RimWorld, in a very exclusive fashion, for the longest time. But given how great Clanfolk and Cult of the Lamb are, perhaps it’s time to branch out and spend some more thousands of hours on tangential experiences, too.

One thing I’ve definitely learned is that base building games are all excessively complicated in some way, even if they don’t adhere to what I had thought of as a ‘perfect’ formula. Neither the complete omission of combat, in Clanfolk, nor its central role, in Cult of the Lamb, broke the genre for me. And, the ability to progress more efficiently through unlockables was extremely exciting, in both cases.

There is life beyond RimWorld; life more Scottish, and (somehow) more evil.