Cult of the Lamb review – The flower of the flock

Cult of the Lamb strikes the perfect balance between cute and sinister in a masterfully interwoven hybrid of genres.
Emily Spindler 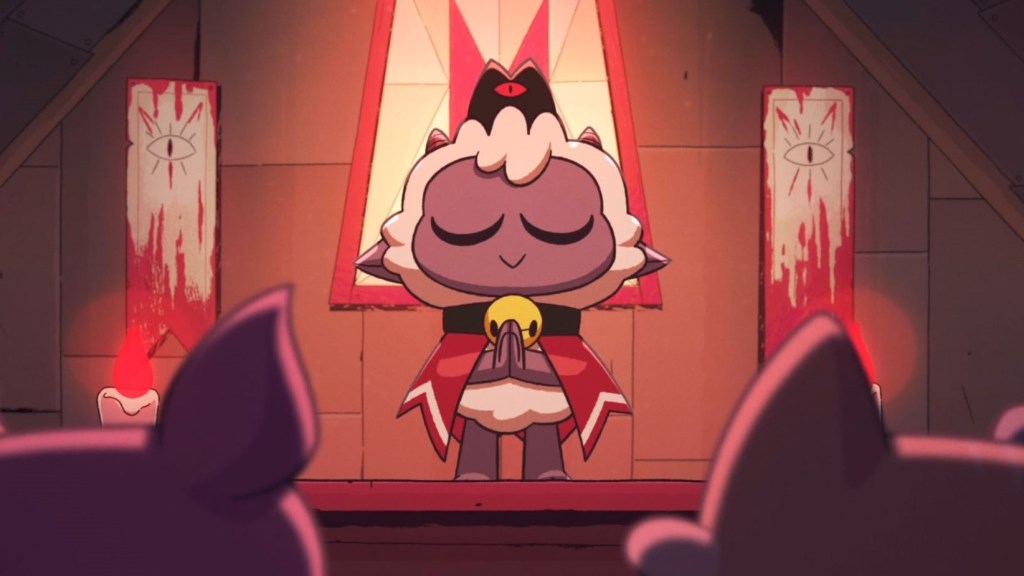 Have you ever wondered what it might be like if cute animals started a cult? Massive Monster’s Cult of the Lamb explores exactly that in a hybrid action-combat roguelike and colony management simulator, taking the best aspects of both genres and melding them together in a very adorable, very creepy package.

In Cult of the Lamb, you assume control of a lamb led to slaughter by four Eldritch entities known as Bishops. While your fate seems dire, you’re ultimately spared from death by The One Who Waits, an incomprehensible, all-powerful deity. In exchange for deliverance from sacrifice, the lamb must build a cult in their honour, and work to free them from their chains. Bestowed with new power and a crown, you set to work converting followers and building your base, all while venturing into unique dungeons to defeat heretics and build your influence.

From the outset, it’s very clear just how unique Cult of the Lamb is. While it clearly takes inspiration from games like Hades and The Binding of Issac in its dungeon-crawling gameplay, the theme, visuals, and sound design work together to create a strong and distinct personality. The idea of adorable animals partaking in a ritual sacrifice might seem odd at first glance, but the combination of the two very opposing ideas works perfectly in this gothic, well-designed tale.

The cute and terrifying feel of the game is aided in no small part by masterful audio design. The cult base, for example, is brought to life by cloying marimba tunes with sinister undertones, as though dark forces lurk behind every shadow. The speaking ‘voices’ of the characters are carefully considered – The One Who Waits has a resonant, otherworldly echo to the unintelligible sounds it makes, while cult members speak in saccharine, high-pitched warbling tones (until they begin to turn from their faith, sewing dissent among the other followers).

While your lamb doesn’t speak beyond the odd bleat during sermons and rituals, the small details like the jingling of the bell around its neck add to the off-kilter feeling of playing a sometimes-homicidal character that is, at its core, a meek and very adorable lamb.

Visually, Cult of the Lamb boasts an unnerving world that feels familiar enough, but is also strange in an outlandish and sinister way. The paper-cutout style is combined with eye-catching and colourful environments and cleverly-designed supporting characters and enemies. Even the most grotesque monsters are, in their own weird way, kind of cute at a first glance.

Supporting characters like the ex-cult leader Ratau make your progression feel more rewarding, but also serve as an interesting glance into the world you find yourself in. One standout side character you encounter during your crusades is Ratoo, a rat whose appearance is scored by a melancholy tune and a body-horror-esque scene, resplendent with a massive, beating heart.

While the game eventually lulls you into a real sense of gothic comfort, I can say this: Cult of the Lamb is not easy. You can adjust the difficulty at any point in the game, but the developer-recommended medium mode makes you feel like you’re just scraping by, both in regards to combat and keeping your cult happy and healthy. Near misses in battle and crises of faith regularly underscore the gameplay loop just when you feel like you’re getting into a groove, keeping you on your toes. After all, a cult leader always needs to watch their back, right?

The game features rougelike elements — dying in the randomly generated dungeons of Cult of the Lamb puts you back at the start (although you do retain a percentage of materials collected), resurrected by The One Who Waits. Death has a knock-on effect, negatively impacting the faith of your cult. Die too many times, and your flock might think you’ve become weak and begin to dissent. It’s in this way that the hybrid nature of the game works so well; rather than feeling disjointed, the mashup of management and roguelike genres is woven together nicely, with each facet of impacting the other.

The mechanics behind the combat itself are simple to grasp, with an ever-changing arsenal provided to you at the beginning of each dungeon crawl, and additional options occasionally presented to you throughout the dungeons themselves. The frequent changes to your weapons (and thus fighting style) keep you thinking differently with each run.

Back at the cult, your followers dutifully worship you, and help gather resources to run your ever-growing base. Making sure they’re happy and healthy is important, as followers who lose hope in your cause will turn to subterfuge, working to turn other followers away. You can opt to ‘re-educate’ them and bring them back into the fold – and for those wanting to take the more spartan route, murder and sacrifice aren’t off the table. Managing your followers and their often contradictory needs keeps this aspect of the game satisfyingly complex, as you try to maintain constantly changing levels of faith, as well as other factors.

The lamb can also issue doctrines, choosing the direction in which you want to lead your cult – a wolf in sheep’s clothing, or loving and kind? The choices in managing your followers means each experience has the potential to be different, suggesting a high degree of replayability. Beyond tending to your flock and working to free The One Who Waits, further locations eventually open up different activities, including minigames like fishing and knucklebones. These small but enjoyable additions add a nice variety to the game, keeping things from being too monotonous.

Cult of the Lamb is a unique experience bursting with personality. It looks and sounds gorgeous, and the gameplay loop is engaging, rewarding, and highly enjoyable from start to finish. Sacrifices and rituals to maintain your faith in the game aren’t necessary, given Massive Monster has created such a shining, standout piece of work.

The PC version of Cult of the Lamb was provided and played for the purposes of this review.