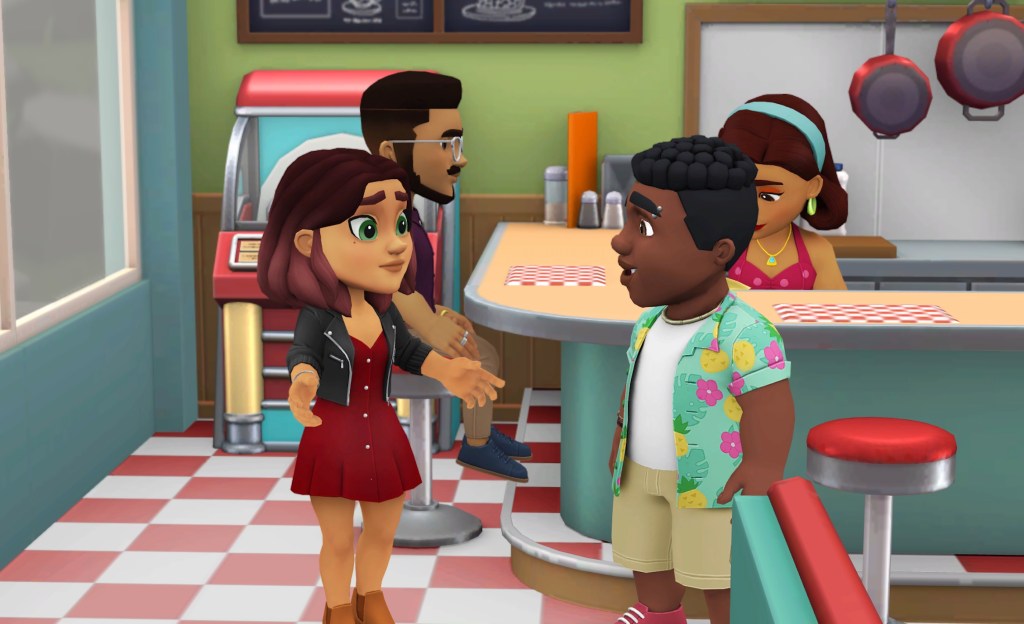 Wylde Flowers has had an excellent 2022, with the game releasing to great critical acclaim on Apple Arcade, PC, and Nintendo Switch, as well as taking out the award for Apple Arcade Game of the Year as part of Apple’s App Store Award celebrations.

Developer Studio Drydock is now capping off the year with a free Endless Seasons and Romance Update for Wylde Flowers for all platforms. It will be released sometime in Summer (Southern Hemisphere) / Winter (Northern Hemisphere).

The Endless Seasons functionality will allow players to change the seasons of the game on a whim once they’ve completed the full game, and get more time to explore seasonal content they might have missed while playing through the game’s story.

The update will also aim to make romance an even deeper experience, with new dates – going for a stroll in the forest, going to the diner for dinner, or hanging out at the bar – as well as a number of adorable new affection interactions between the player and their partner of choice.

The update will also feature new story elements, but Studio Drydock did not divulge the details.

Speaking to GamesHub, Studio Drydock Managing and Creative Director Amanda Schofield said the community response to Wylde Flowers over the past year has astonished the team.

‘We have so many dedicated fans that cosplay or fanfic or fan art for this game… it’s not an experience that they’ve had and walked away from, it’s something that they’ve kept with them’.

Schofield also spoke to a new audience the team had not anticipated for the game: children playing with their parents.

‘This being the first voice-acted, life simulation game of its kind, and being very approachable content for a lot of age groups, we’re finding a lot of parents playing with their young children – where the children are kind of watching it as if it’s a movie, because it’s got that sort of Dreamworks-esque double-layer of funniness and deep meaning that brings families together.’

‘I didn’t see that coming but it’s really important to me now that it’s there.’

Schofield also spoke about the significant creative and financial support Apple provided the studio when originally developing the game for Apple Arcade, and how that enhanced what Wylde Flowers ended up becoming. There’s a direct line to be drawn from this support, and those unforeseen audience experiences.

‘The natural fit between Studio Drydock and Apple is that we share a lot of values. I know that diversity is super important to them, and that they will hold the line and protect that,’ said Schofield.

‘But honestly, this would have been a much smaller game without Apple. When we were first discussing bringing the game to Apple Arcade, they said to me, “Well, if you could do anything, if you could add anything to this game and make it even bigger, what would you do?” And I said, “Well, I’m seeing a lot of games, especially in Asia, where they have voice actors, even on mobile. And I think that’s something that’s going to be really important in the future. And that if we’re building a narrative game without voice acting, I think that’s a missed opportunity.”‘

‘And they said, “You should do it, then.” I think we’d be having a very different conversation now if not for that, because the voice acting is honestly the best part of the game.’

As for the future of Wylde Flowers, it’s pretty safe to say the Endless Seasons and Romance Update to the game will not be the last. ‘We’ve been watching player feedback quite closely,’ Schofield said.

‘People will see this update and there’ll be a big list of things they’ll be like, “But what about…?” and all I have to say on that is: watch this space.’

Wylde Flowers is available now for Apple Arcade subscribers, as well as on PC and Nintendo Switch.