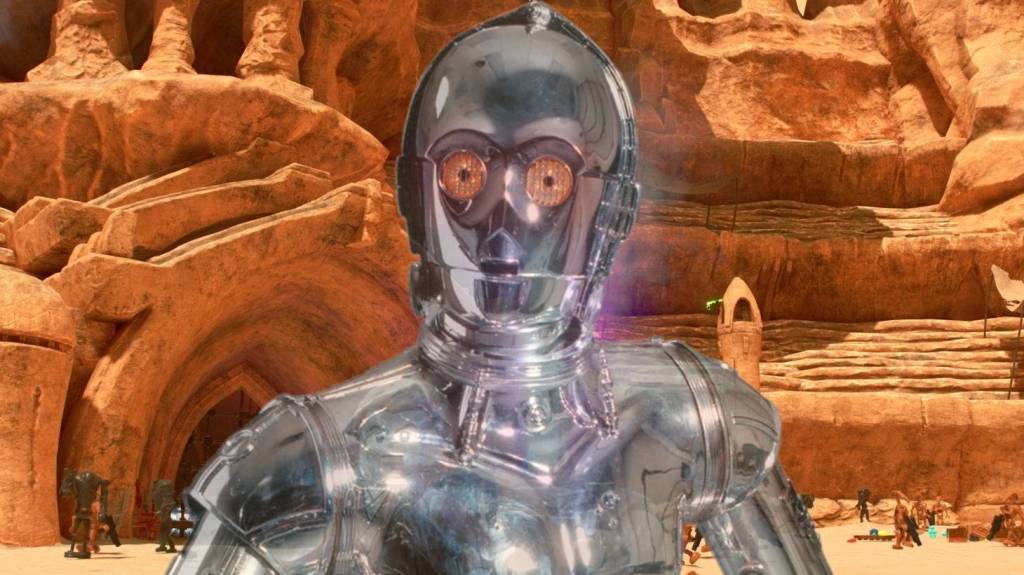 Lego Star Wars: The Skywalker Saga is, for the most part, a fun, family-friendly romp through Star Wars history. But it turns out there’s a rather creepy easter egg hiding within the Phantom Menace chapter. It appears that if any character enters a certain hovel in Mos Espa, they’ll trigger a terrifying cutscene where they encounter a grey droid known as Nobot.

The area, named ‘Haunted Hovel’ is only occupied by Nobot – and following a tense camera zoom in, the droid will simply run away, never to be spoken of again. You can check out the horrifying moment below, courtesy of YouTuber ChiTownRules09:

Taken on its own, the encounter is already creepy. The Haunted Hovel is a derelict location, one filled with dirt and cobwebs. But once you know Nobot’s story, the easter egg gets a little bit more questionable.

In Star Wars lore, Nobot was a 3-PO series protocol droid that wandered Tatooine endlessly. In an effort to explain its origins, a street vendor known as Jira once explained (per Legends source material) that Nobot had been the sole witness to the murder of a young pregnant woman – with many believing the droid committed the act.

Driven mad by these events, Nobot would wander Tatooine and Mos Espa replaying the ‘screaming’ audio recording of the murder as its only form of communication. If anyone got close, the audio would play over and over, haunting whatever poor soul approached the droid.

While Star Wars canon implies this story may not be true, and that the vendor simply made up the Nobot story to scare visitors, it remains one of the haunting tales of the Legends canon. Given nobody really knows where Nobot came from, it’s doubly terrifying to think about.

In actuality, the character was just an extra in Phantom Menace that drew the interest of fans – but with such dark origins, maybe it would’ve been better if he’d simply flown under the radar.

Some claim Nobot is part of the dark side of the force. Others claim he’s just a geriatric, incomplete project – but whatever the case, he remains a spooky figure in Star Wars mythos. If you encounter him for yourself, be incredibly wary. You’ll never know if this droid really did murder a pregnant woman in cold blood – or if he’s just a little bit confused.