A new report has outlined a 1-2-Switch sequel that tested so badly it would reportedly 'damage' Nintendo's reputation.
Leah J. Williams 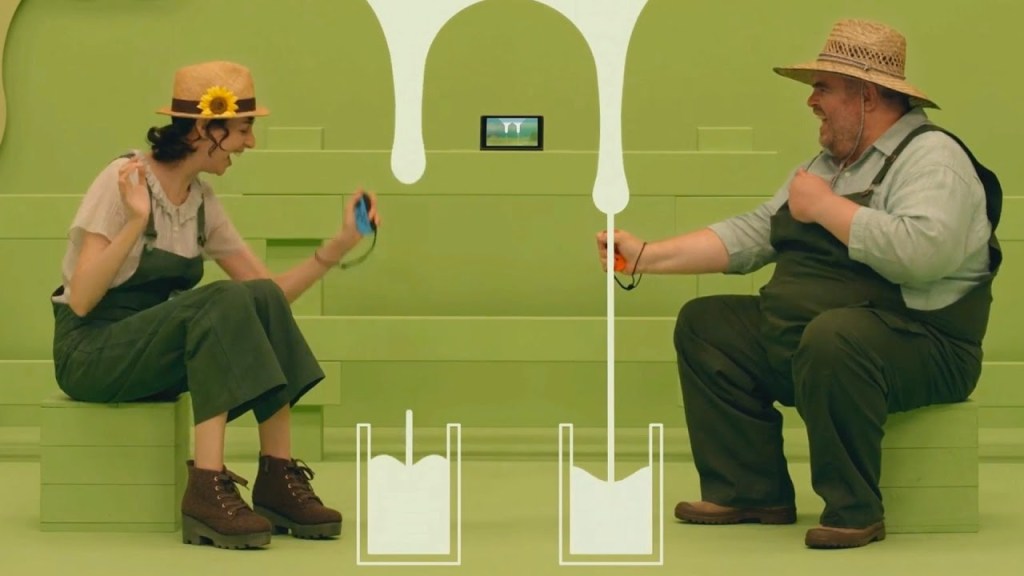 Minigame collection 1-2-Switch was a moderate success when it launched in 2017, largely due to the motion-controlled novelty of the title, and a lack of competition in the Nintendo Switch launch lineup. As of 2020, the title had sold 3.45 million units, a number that reportedly inspired Nintendo to begin work on a sequel. According to Fanbyte, this alleged sequel has now become a thorn in Nintendo’s side.

As reported by Imran Khan, work on Everybody’s 1-2 Switch allegedly began following the original game’s successful launch, with Nintendo looking to create a new party game inspired by the iconic Jackbox Party Pack series. The report suggests Everybody’s 1-2 Switch was created to allow up to 100 players to compete together in minigames based around a ‘gameshow’ theme.

This action is reportedly guided by a man in a horse mask (presented as an actual bipedal horse), with this character inviting players to participate in musical chairs, bingo rounds, and a ‘nice’ version of spin the bottle. But while the idea sounds solid on paper, Fanbyte claims feedback to early tests was ‘horrible’.

‘When playtesting groups received the game, the feedback to the development team was brutal,’ Khan wrote. ‘The target audiences Nintendo was hoping to hit – families with children – found the games boring; many didn’t even want to play through entire rounds.’

Feedback was reportedly so bad that launching the game in its playtest state would have damaged Nintendo’s reputation. Many employees allegedly began calling the title ‘Horseshit’ behind the scenes, with some raising alarms about the poor quality of the title.

Despite this, Nintendo apparently prepared cover art and assets for the title, assuming that with development tweaks and more time, it would eventually become playable and ready for release. According to Fanbyte, that’s not the case, as Everybody’s 1-2-Switch may actually be stuck in development hell.

At this stage, it’s unclear what Nintendo will do with the title. The Fanbyte report certainly doesn’t paint a pretty picture for developers, and it’s unlikely the company will be willing to launch a game that’s now garnered a poor public reputation, as well as a terrible one behind the scenes.

At this stage, it’s likely Everybody’s 1-2-Switch will be quietly shelved – or that its launch will be well-delayed as developers continue to listen to internal feedback and attempt to shed that unfortunate, alleged ‘horseshit’ moniker.

That said, Nintendo is known to work on games for a long period of time games like Nintendo Switch Sports reportedly spent 5 years in development, others projects like Metroid Prime 4 have been in development and even tossed around multiple studios for longer than that.

While there’s certainly potential in the Nintendo Switch minigames scene, it appears the 1-2-Switch sequel is not quite what Nintendo had in mind.