There has never been a more perfect answer to the question, ‘do you have games on your phone?’
Jini Maxwell 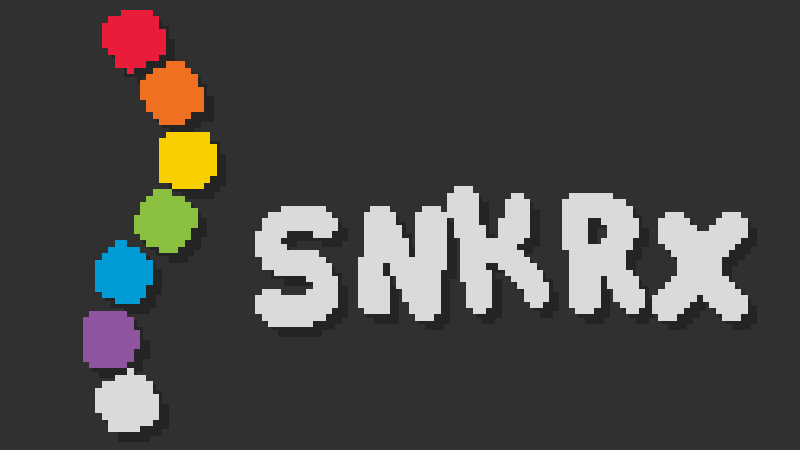 If you’re looking for something to keep your brain and thumbs occupied, look no further. I’ve been playing A327ex’s SNKRX, a mechanically straightforward game that brings all the strategy of a good roguelite to a classic, minimalist design. Set to a triumphant electronic soundtrack, this solo-developed title for PC and mobile totally took me by surprise.

SNKRX blends the simple movement pattern of Nokia’s mobile classic, Snake, with roguelite autobattler mechanics. This might sound complicated, but in practice, it’s really simple. Each round is structured like so: at the top of each turn, you have the option to buy different units which compose the body of your snake (to a maximum of 7 units at the start, which expands by 1 each time you beat the game), and then confront waves of enemies with those automatic units, weaving around the enemy units while your battlesnake does its thing. Every so often, you get the chance to pick up passive bonuses, and gathering units of the same class creates extra passive bonuses.

Despite the simplicity of the design, there’s a depth to the strategy that is incredibly satisfying when you nail it, and not too heartbreaking when you don’t. You have a huge amount of control over how you play: depending on how you build your snake, it could throw projectiles, curse your enemies, slam them into the wall on impact. One of my favourite strategies is a ‘swarmer’ build, where the snake constantly disperses violent little critters to pick off your enemies. Combined with a passive bonus that makes your critters explode on impact, doing damage to the area, it’s a very satisfying way to push your way through an enemy wave. In SNKRX, it’s easy to find a play style that suits you, and the unit shops are frequent enough that you have plenty of space to switch things up if you’ve made a tactical error.

READ: Netflix to develop games, will be offered on the service within the year

The rhythm of the gameplay also makes it a perfect pick for mobile – the rounds of battle actually only last a couple of minutes, and the periods of strategy, where you pick new units, upgrade existing ones, or choose passives, have no time urgency, which means that it adapts easily to being played in disrupted sessions.

I got into the game through Northernlion, a streamer who focusses primarily on strategy and roguelike games. Interestingly, Northernlion is also mentioned as a major sales factor in the brilliantly detailed post-release update. His stream didn’t just boost sales because it boosted visibility, the developer notes, but Northernlion has such a clear focus, his viewers trust his recommendations.

Actually, the post-release update for SNKRX is actually kind of hilarious in full. It details a pretty heartwarming narrative about an indie dev who didn’t expect his weird little snake game to get the commercial and popular success that it has. For example, the developer enlisted David Khachaturov to handle the mobile port, and in return the developer offered him 100% of the game’s earnings on mobile. He justifies this (seemingly wildly generous deal) because apparently, the code was a nightmare:

‘My thinking at the time was that I was projecting the game at like a few thousand dollars over the years, which is practically nothing, and since I’m not really hurting for money, if he actually managed to port the game he could have the few thousand bucks it would likely make there. Plus, him having all of it would likely motivate him to actually finish it, since at the time I was also thinking that the code was a mess and he would end up giving up midway.’

Ultimately they struck a more equitable deal (50/50 profit split, with Khachaturov taking 100% up to the first $20k) at Khachaturov’s urging. I love this anecdote, because it is so expressive of my favourite thing about indie game dev – people cobbling together for the love of cobbling things together, and not expecting all that much financially. From the post-release update, one gets the impression that making games is a genuine source of joy for them both. It seems like a happy coincidence to A327ex that the game has already surpassed the earnings of any previous project by an order of magnitude.

Returning to SNKRX itself, however – it’s not hard to see why the game has found an audience. It commands your attention without making heavy demands on your time, and the depth of strategy combined with simple mechanics is just so satisfying. It’s the perfect answer to the timeless question: ‘Do you have games on your phone?’

SNKRX is available on PC or mobile. Watch the trailer below: