The Last Express is as mesmerising and relevant as ever, 25 years later

It was a remarkable feat of video game artistry in 1997, and much of what The Last Express accomplished remains unique and relevant to this day.
David Wildgoose 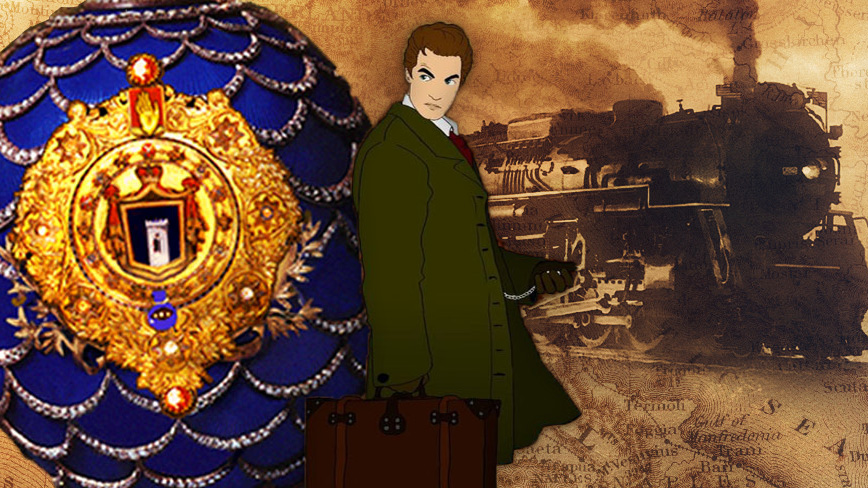 Playing The Last Express today carries troubling echoes of when I played it for the first time 25 years ago. A mystery thriller set on the final journey of the Orient Express on the eve of World War I, The Last Express was developed by Prince of Persia designer Jordan Mechner and his Smoking Car Productions studio against the backdrop of political upheaval in Europe.

Released in 1997, when the break-up of the Soviet Union and the splintering of Yugoslavia were still fresh in the mind, it charted a course across Europe – from Paris to Constantinople – mapping the tensions of the continent’s political struggles onto its passenger list. The elderly Russian aristocrat and the explosive young Bolshevik; the French bourgeois capitalist and the German industrialist with a side hustle in arms-dealing; the Austro-Hungarian spy and the group of Serbian revolutionaries; and of course the Americans interfering in everything.

Some scenes hit particularly close to home. Over a drink in the smoking car, British government official George Abbott is extolling the virtues of a united Europe.

‘I really feel we’re witnessing the birth of a new Europe,’ he tells August Schmidt, the German industrialist. ‘Where business is the true international language.’

‘And the Orient Express is really quite remarkable if you stop to think about it. Here we are, we’ve just crossed from Germany into Austria and not so much as a customs check to let you know we’ve crossed the border. Now that’s the new Europe.’

‘Another year or two and frontiers will be a mere formality, a relic of the past. You’ll be able to travel from England to Germany as easily as from one end of London to the other.’

It’s not just Russia’s 2022 invasion of Ukraine that weighs heavily on my mind as I play. Fractures like Brexit, the rise of nationalist leaders like Viktor Orbán in Hungary, and recent French presidential contender Marine Le Pen promising to withdraw France from the Schengen agreement have all contributed in recent years to exposing the fragility of the European ideal. Just over a century on from the wider political landscape that serves as a backdrop for the fictional events of the game, The Last Express feels as relevant as ever.

You play as Robert Cath, a twenty-something American with a knack for inserting himself into sticky situations. He has arranged to meet his friend and fellow American Tyler Whitney aboard the Orient Express. Whitney has stumbled onto ‘something big’ as he puts it in a telegram to Cath. But when Cath makes his belated arrival on board, thanks to some derring-do involving a motorcycle, a mysterious redhead and a death-defying leap onto a speeding train, he finds Whitney dead in his compartment, covered in blood. Thinking quickly, for if he informed the police, a man without a ticket would be their prime suspect, Cath hides the body and assumes Whitney’s identity to solve his friend’s apparent murder.

The Last Express is a point-and-click adventure game played from a first-person perspective, aside from cuts to third-person to show Cath during conversations or in one of several simple fight scenes. At the time, this wasn’t unusual. Though the genre had typically presented its stories in third-person dioramas, through the template established by LucasArts with its Monkey Island series and Sierra with its assorted Quest games, the recent success of Myst (1993) had seen many adventure games switch to a first-person presentation.

The first-person format is used to stunning effect in The Last Express. The entire play space is confined to the narrow corridors of a half-dozen train carriages. You navigate them by clicking to walk forward, with the scene transitioning to a few paces further down the corridor, or by turning left, right or around.

Other characters, whether a fellow passenger or one of the conductors or attendants, are constantly moving about the train. You’ll see them walk towards you along the corridor, the black-inked outlines sharpening into focus as they approach, and for a brief moment, just before they pass behind you, they’ll look directly out of the screen as if making eye contact with Cath.

It’s a moment that’s as mesmerising today as it was 25 years ago, a humanising connection between you and this animated character that is as indelible as it is fleeting.

To create these characters, Mechner and the Smoking Car team used a technique known as rotoscoping where actors are filmed and then frames are traced over to produce authentically human animation. Mechner had employed this method with his previous games, Karateka (1984) and Prince of Persia (1989), but they were both 2D games where the characters moved only from side to side in one plane. For The Last Express, they would need to rotoscope characters moving in and out of scenes, towards and away from the camera.

The endeavour of filming The Last Express was hugely expensive for the time, eating up a large part of the final US $5-6 million budget. The three-week live action shoot, where actors wore exaggerated makeup and clothes marked up with heavy black outlines to highlight details for the later animation process, also had to be front-loaded into the development schedule. Without the footage, without the characters moving up and down the train, there was no game for Mechner and his colleagues to work on.

A knock-on effect of that production schedule was that it would be very difficult to make changes to the script or the actions of a character down the track. However, a firm technological constraint meant that they were able to find a way to incorporate necessary changes at a later stage. Despite the increased storage capacity of the then-new CD-ROM format, and despite shipping on three CDs, PCs did not have the memory to smoothly animate all the characters on-screen. So, in many instances, only a few frames of animation are used, and characters cycle through what are essentially different poses – looking up at Cath, grimacing, laughing, taking a sip from their glass, and so on. This meant that the developers were able to change lines of dialogue, re-recording additional audio only, safe in the knowledge that they would be able to drop it in without messing up a lip-sync or needing to reshoot the actors.

The end result of this technical limitation is the characters you meet on The Last Express are brought to life in a way that confounds their seeming lack of life. What at first appears as stilted soon becomes iconic. Those poses, those gestures, and looks caught in a still frame, become memorable in a way that perhaps they wouldn’t have been if each character had been smoothly animated for the entire game.

With its eye-catching “Art Nouveau” characters and impeccably modelled recreation of the Orient Express, The Last Express had a distinct look. But perhaps the aspect that sets it furthest apart from its contemporaries is that its story unfolds in a clever approximation of real-time.

As Cath moves about the train, time passes. As he rummages through Whitney’s compartment, the clock is ticking. As he sits in the dining car and eavesdrops on the conversations bouncing around the carriage in numerous languages, the train is relentlessly moving closer to its destination. Stand still and light up a cigarette, and time inches forward.

Not only that, the cast of characters orbiting Cath are moving around the train. While Cath is reading the newspaper in the smoking car, other passengers are on their way to dinner or gossiping in their compartments. The conductor regularly patrols the length of the train, leaving his post in the guard’s compartment for anyone with an inclination to search another passenger’s stored luggage in a narrow window of opportunity. And in the narrow aisle of the sleeping cars, compartment doors are frequently opening as passengers enter and exit, conveniently obstructing the guard’s view of anyone seeking to sneak into someone else’s compartment.

The puzzles, such as they are, are about collecting information in order to work out where you need to be at certain critical moments. There’s even a rewind mechanic that lets you turn the clock back to any prior stop along the journey to try a different course of action. The rewind doesn’t exist merely to correct mistakes or offer Cath a second chance. Rather, it’s a vital tool that lets you poke and prod at every scene, to investigate every nook and cranny of the train, and to view the dramatic space from every angle.

Few narrative-focused games, before The Last Express or since, have attempted this kind of real-time design. And what’s most remarkable is that it still holds up today. Hearing the attendants advancing down the corridor, knocking on each door to come in and make the beds, while you’re standing in Whitney’s compartment wondering what to do with his body, knowing that they’re just about to knock on your door and you’ve got mere seconds to do something… is still as nerve-wracking as it was in 1997.

Over the course of the whole game, I was constantly astonished at how clever the script is at hinting that maybe there’s something going on elsewhere that you ought to be attending to, and how flexible it is at adapting to Cath being in different places at different times, letting you skip certain conversations or trigger them in a different order. Even 25 years later, in this regard at least, there’s nothing quite like The Last Express.

In its original release, The Last Express ended by rolling its credits over a geopolitical map of Europe.

In a timelapse advancing through the years from 1914 onwards until the mid ’90s, it showed the shifting borders of Europe, the consequences of terrible events rippling out over the decades to come. As a game, little of what The Last Express achieved has rippled out into other games in quite the same way. In many ways it stands frozen in time, like its characters locked in one static pose. As a piece of history, it still has many lessons we’ve perhaps yet to learn.

The Last Express is available to play on modern PCs via Steam and GOG. It’s also available for mobile devices via the App Store and Google Play.