The best party board games are easy to learn, simple to set up, and great fun for everyone. Here's a few to get the party started.
Leah J. Williams 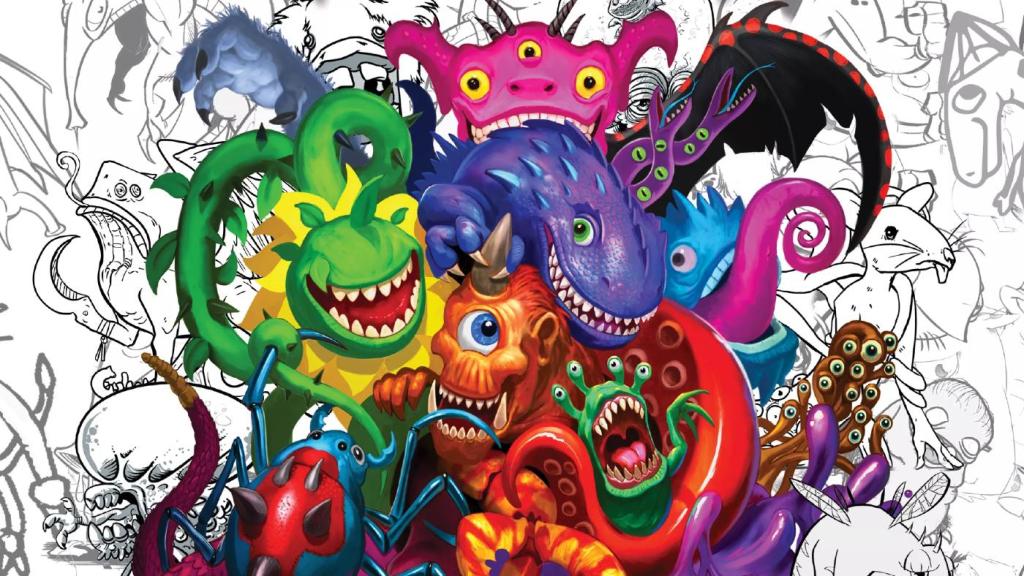 The best party board games are simple to set up, easy to learn, and fun for everyone involved. They need to strike a delicate balance between chaos and entertainment, and importantly, they need to fit the mood of your party. Titles like Exit the Game can work for the right crowd, but if your friends aren’t into puzzle solving, it won’t be a real blast. Simple games like Monopoly or adventure-based board games can be crowd-pleasers in the right circumstances, but typically you want games that will be quick, fun, and easy to join.

Think card games, or board games with easy rules. Classics that crowds may be more familiar with, or games that use recognisable, easy-to-understand mechanics. There’s plenty out there that’ll help kick off a fantastic board game party in 2022. Here are a few GamesHub favourites.

MonsDRAWsity is a monster-themed spin on Pictionary where players must draw a monster, as described in 20 seconds by a frantic ‘Witness’. This Witness is allowed to look at any monster included in the game (there are plenty, and hundreds more available via expansions) and must memorise every detail. The person with the most accurate drawing, based on the Witness description, wins.

The best thing about MonsDRAWsity is that any number of players can take part. While the game’s box does indicate an eight-player limit, as long as you have a pencil or pen and paper, you’re good to go. Really, this is a game that can be modified to be played even without the box – but the monster designs and setup are gorgeous, and well worth a look for your next party.

If you like the ‘monster’ theme of MonsDRAWsity, but you’re not a particularly talented drawer, you can also try Hideous Abomination, a recent Kickstarter hit that asks players to construct the perfect, horrible monster using pre-drawn cards.

Gloom is a card game about adopting a strange, Victorian-era family, and making them very depressed before they die in strange and hideous circumstances. And does that make for a great party game? It sure does!

In Gloom, up to four players will choose a family to torture, and use transparent cards to inflict strange happenings on their day to day. One family member may be attacked by bees. Another is chased by a dog. The sadder they become in light of these events, the more points you score.

If you’d like to be a bit meaner on your turn, you can also inflict ‘happy’ events on other players, reducing their potential to earn high scores and pushing your advantage. It’s a quick game, and will take around 30 minutes to an hour, depending on how quickly your players make decisions. Couple that with a short 5 minute learning time, and you’ve got a game that’s great for whipping out at short notice. It may seem depressing, but Gloom can be an absolute blast at parties.

Sushi Go Party is a game that’ll make you very, very hungry – but it’s also a fantastic party board game with a neat setup, attractive art, and gameplay that won’t take too long to learn. This platter-based board game is all about collecting sushi, from sashimi to mega maki and beyond. Each piece has a certain number of points ascribed to it, and combos that you’ll need to put together to win the game.

The whole thing plays out on a sleek conveyer belt board, with players taking turns to select orders from the menu and ‘play’ them on their turn. Up to eight players can join in, making this great for larger multiplayer sessions. The goal here is to gather the most points by making good choices – but you’re also more than welcome to forgo these rules entirely, and just pick the cards with the cutest art.

Every piece of sushi here has a cute little face, making even the act of gathering cards just adorable. While it may take some time to learn the best strategies around choosing cards, it’s a game that’s easy to get into and play straight away.

Marvel Villainous and Disney Villainous are essentially the same strategy-based board games – the only difference being that one features Disney villains, and the other features Marvel villains. Your goal, as one villain from these games, is to fulfil a particular goal by using tokens to carry out ‘evil’ deeds. Along the way, you may be thwarted by other villains, or by heroes that appear as you play.

Each villain has their own unique and nefarious goals to complete, meaning the game changes every time you play. The base set for Marvel Villainous includes iconic characters like Hela, Killmonger, Taskmaster and Ultron, and you can also nab Loki in the game’s Mischief & Malice expansion.

While this party game does come with a caveat – the rules may take a little bit longer for non-board game fans to learn – once the action kicks off, it’s a blast to embody each villain. Gameplay itself takes place in quick turns, so you’ll also be able to chat and eat while you play.

It’s hard to go wrong with a good game of Pictionary but the 2019 upgrade, Pictionary Air, is arguably the best party game of the entire lot. For those unfamiliar with Pictionary, the basic premise is that players grab a card with a concept or item on it, and then must draw it – without saying a word – for an audience who then guesses what it is.

Traditionally, this is done with pen and paper, but in Pictionary Air, you’re using a ‘magic wand’ combined with a tablet to literally draw in the air. When you press a button on the pen, you begin to ‘draw’ via the app, creating an image that people will then interpret. It’s particularly chaotic because the person drawing can’t see the tablet – meaning they have no idea what players are really seeing. This adds a layer of challenge that only gets funnier the longer the game goes on.

If you’re keen to laugh at somebody else’s expense, Pictionary Air is the perfect, simple game to do it. There are no real rules to learn, and you can get started right out of the box.

Azul: Summer Pavilion is a spin-off of the base Azul game, but it’s far prettier and easier to learn than its predecessor, making it the perfect, relaxing party board game. While many titles on this list focus on the ‘action’ side of board gaming, there’s plenty of room for calming experiences, too. There’s no real rush in this tile-laying game, where players must collect coloured tiles and change strategies as rules shift each round.

The basic concept is that players will work towards filling out coloured ‘star’ patterns on their individual boards, all while attempting to gather the most tiles using clever strategies and forward-thinking. Mostly, you can get away with chilling out, picking the tiles that look prettiest, and decorating your board as you see fit.

After six rounds of picking, players will tally their scores based on how many combos they achieved and whether they were able to decorate their boards to the fullest extent. The whole experience takes around an hour, depending on player speed, and you’ll come away feeling more refreshed than when you began.

Everybody quietly loves to prove they ‘know things’ – and what better way than with Trivial Pursuit, the classic trivia board game that’s great for parties and family get-togethers. The rules here are phenomenally simple: all players need to do is answer one question from each game category correctly (Entertainment, Sports, Science etc.) and move their player token to the centre of the board.

There’s a lot of luck in winning Trivial Pursuit because some questions are easier than others, but that just means a level playing field for players in all categories. It may also lead to some hilariously wrong answers as players vie for the top prize. Family Edition is the best version of the game for parties, but it is important to note many of the questions are inspired by UK culture, which will cause some confusion. Regardless, Trivial Pursuit is a fantastic party board game, and great for flexing your general knowledge.

Another quiz-based board game that may go down a treat with your friends is Blockbuster, which combines charades with movie trivia, all housed in a replica VHS box.

Have you ever wanted to throw things at your friends? Well, Throw Throw Burrito has you covered. As the name suggests, this is a game about throwing burritos at your friends, all while trying to collect cards and earn the most points. The game starts in a fairly simple fashion: you and up to six players draw cards, keeping them a secret. Discovering a set of three means you earn major points.

But as soon as somebody plays a ‘Burrito Card’, it’s time to stop drawing and attempt to grab the two plush burritos in the centre of the playing table. If you manage to hit someone with either burrito, they lose points. If you get hit, you also lose points.

Depending on what card is played, the burrito war may have specific rules – one option causes a cowboy-themed burrito duel – otherwise it’s largely a free-for-all filled with chaos, perfect for wild party antics. In the end, the card drawing and point scoring is the least interesting part of this game – but it does provide some welcome relief before the next barrage of burrito anger is unleashed.

Board games and parties go together perfectly – you just need to pick the right game, at the right time, for the right people. While we’ve shared plenty of options here, there are so many great party board games still to discover. Introduce your friends to a few of your favourites, and see where you can go from there!

You can also look forward to the future with our list of the most anticipated board games of 2022 and beyond, or check out more great board game lists below: