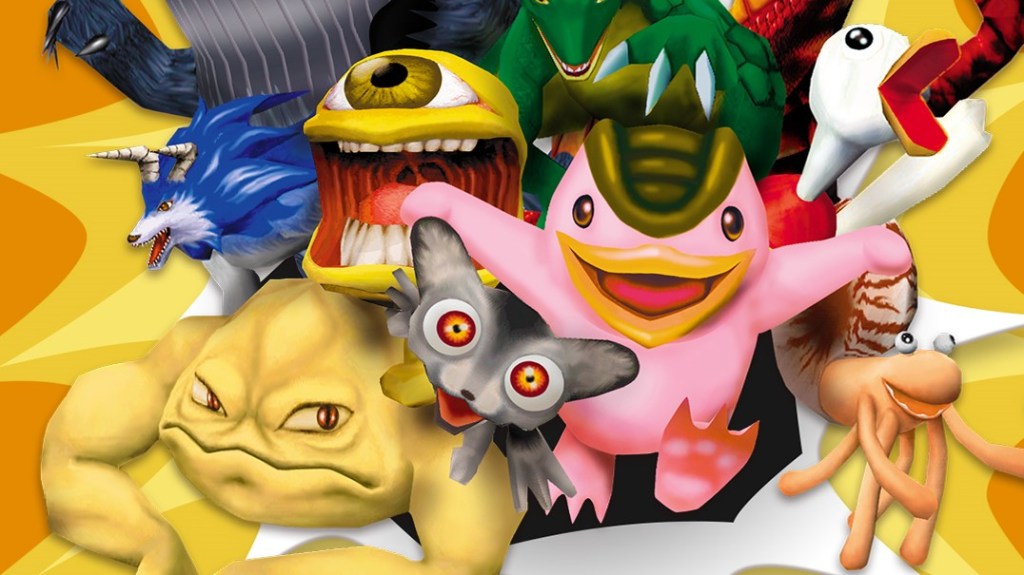 These monsters might not fit inside a pocket-sized ball (like Pokemon), nor can they evolve with the help of a digital device (like Digimon), but they once held their own during the 1990s heyday of monster-raising games. This is the Monster Rancher series, developed by Koei Tecmo, and also known as Monster Farm in Japan.

While the series no longer commands the same attention it used to, the combination of an interesting premise, plus one-of-a-kind game mechanics have allowed it to endure through the years, via a loyal cult following. This eventually led to a major franchise return in 2022.

The Lore of the Monsters

Like other games of its genre, the lore of Monster Rancher is built on the relationship between monsters and humans. Both once coexisted together, but monsters were eventually sealed into circular tablets called ‘disc stones’.

Following the game’s timeline, players now live in a world where archaeologists and temple priests are able to bring these monsters back. They play a role through battles and breeding, alongside their human owners. The actual plot varies from game to game, but for the most part, players maintain the role of a monster breeder eager to rise to the top of the region’s respective fighting tournaments.

There’s a rich history about the true origins of these monsters, each different region, and their respective monster-battling organisations, such as the Fraternal International Monster Breeder’s Association. Much of this unfolds slowly and deliberately as you rise up the ranks and meet more characters, allowing for a very well-paced storytelling to keep players intrigued.

The bulk of Monster Rancher gameplay is spent between raising and battling. But the most interesting part of the game was how you obtain your monsters: by generating them from your own real-life collection of CDs and DVDs.

Within the game, this takes place at the Shrine, where players are prompted to insert the aforementioned ‘disc stone’. I have many fond childhood memories of ransacking my father’s music collection to try disc upon disc in pursuit of a rare monster. I cherished my Backstreet Boys CD all the more deeply, because it was now also the source of my favourite Gali/Pixie hybrid monster. Fusing monsters at the Shrine was also possible – this could produce new monster breeds, or be used to hedge against probabilities to get a pure breed variety.

With monsters at hand, players must take an active role in nurturing them through the course of their life. From selecting food for the week to training them, praising them, and disciplining them, all of this helps shape the monster’s personality and abilities.

It can sometimes be nature against nature, as monsters do come with their own inherent characteristics. Suezo, the game’s iconic yellow eyeball-on-a-stick monster is known to be a very clever species, but with a high-base intelligent stat comes a wilful being that doesn’t often obey orders. Tiger, on the other hand, are naturally loyal, which makes them easier to train.

Becoming the owner of a monster champion is the ultimate goal, but the challenge is working within the limits of the monsters’ own life span. These differ from species to species but strenuous training, illness, and other factors all reduce how long they’ll live. From a big-picture perspective, being a good breeder and trainer is all about balancing rest, training, and starting off with a strong monster breed.

While the original Monster Rancher and Monster Rancher 2 are the most notable in the franchise, the third and fourth edition made some commendable quality-of-life upgrades. Monster Rancher 3’s Monster Encyclopaedia kept a log of disc-generated monsters which meant players did not have to remember and search for old discs to get a previously reared monster.

Monster Rancher 4 introduced the ability to raise multiple monsters at a time, allowing room for friendships between monsters, tag teams, and group battles. A spin-off game, Monster Rancher Battle Card was an interesting TGC take, and a short two-season anime adaptation rounds off most of the media within the franchise.

Is there a place for Monster Rancher today?

With a mostly solid track record of producing good games, one wonders why Monster Rancher never took off the way other monster-battling games did. Perhaps the less cute and more realistic designs made the monsters less marketable, especially to an overseas audience that would much rather spend time with Pikachu than with the brown-bodied, tusk-rearing Worm. It could also be that the hybrid gameplay of raising and fighting was too involved and complicated for the late 1990s audience.

Despite this, 20 years on, we’ve seen the resurgence of many new hybrid life simulation games, such as Harvestella, and games that occupy multiple disparate genres, such as the colony building and roguelike adventures of Cult of the Lamb. Perhaps today’s expanded audiences would be far more open to games that carry multiple play styles.

Important to note is that while the hype around it has faded, Monster Rancher lives on.

A remastered version of Monster Rancher 1 & 2 was released on Nintendo Switch, PC, and iOS in late 2021. The newly released Ultra Kaiju Monster Rancher sees an old dog returning with its old tricks, just reskinned with over 200 kaiju – Godzilla, Ultraman, and all of their friends of the genre.

This left-of-field collaboration seems wacky enough to make sense, and will likely appeal to the core fanbase who have been with the series since birth.

Instead of using the once revolutionary disc stones – who has CDs anymore these days? – the game uses NFC devices like mobile phones and public transport cards to generate its monsters. Will the mix of licensed property and NFC novelty be enough to help Monster Rancher find a new audience? Only time will tell.