Pokemon Violet is a grand and impressive adventure that heralds a new chapter for Pokemon – although it is held back by performance issues.
Leah J. Williams 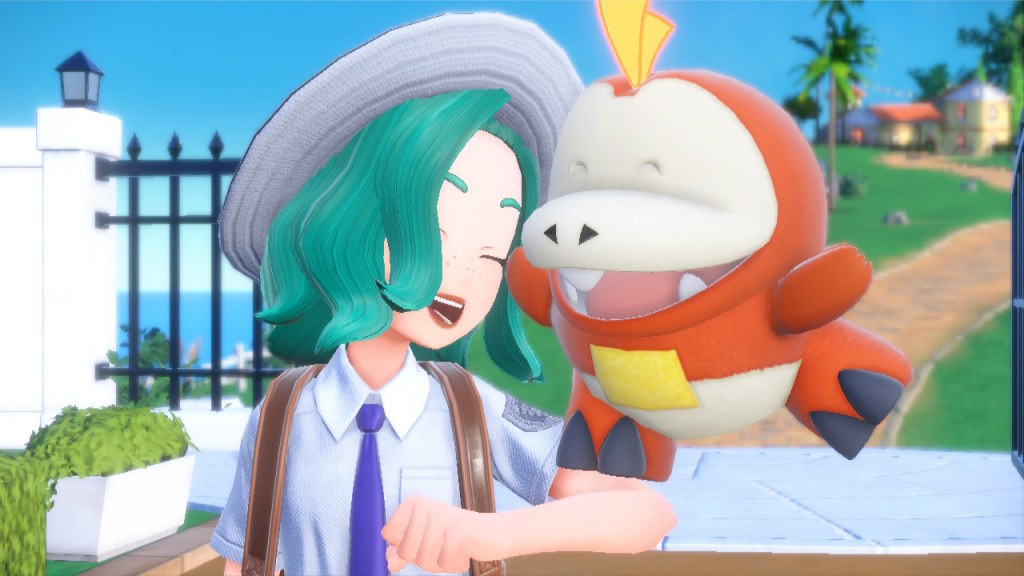 For decades now, the Pokemon franchise has built itself on a linear structure, encouraging multiple generations of players to take part in sequential gym battles, going from town to town as they collect new Pokemon, uncover strange mysteries, and work towards becoming a Pokemon Champion. In Pokemon Violet (and its companion title Pokemon Scarlet) much of this guiding narrative remains – but developer Game Freak is finally breaking away from its tried-and-true formula by prioritising open-world gameplay and freedom of exploration.

Pokemon Scarlet and Violet is a revelation. It’s an essential ‘next step’ in the evolution of the mainline Pokemon games. Much like Pokemon Legends: Arceus, it finally tries something new, and the world of Pokemon is better off for it. While a few ghosts of past Pokemon games remain embedded in the core loop and structure of this new tale, some clever tweaks turn these bones into new building blocks for something better.

While the game’s technical performance is occasionally held back by sharp frame rate drops and odd animations the heart of Pokemon Scarlet and Violet beats strongly enough to compensate for these issues.

Your first steps into Paldea, the open world region of Violet and Scarlet, are familiar. You start in your bedroom, greet your mother by the door, and make your way into a wild world filled with Pokemon. In Violet and Scarlet, this introduction comes by way of a school-themed framing narrative. You are a new student at Uva / Naranja Academy, a learning institution that prides itself on teaching arts, science and maths, alongside Pokemon battling.

On the steps of the Academy, you’re greeted by your rival – Nemona – and kick off your very first Pokemon battle. But after a short hour or two in this traditional segment, the first twist in the Violet and Scarlet formula rears its head.

Following a defeat, Nemona gives you a simple message – go to Cortondo and battle the game’s first gym – or don’t. There are plenty of other people that need your help too, and you’ll meet them all in this opening stanza.

One student, Arven, wants help to take down the strange Titan Pokemon that appear throughout Paldea. Another student tasks you with taking on Team Star, a villainous organisation terrorising folks at nearby camps. Your goals are split into three major quests – Victory Road, Path of Legends, and Starfall Street.

At this injunction, the game’s map also opens up in a major way. There’s nobody to point you in the ‘right’ direction, and no real imperative to tackle one quest or another. With no hard guidance, Violet encourages you to take not just steps but leaps into Paldea, with your new Pokemon pals by your side.

The wonder of exploration is only somewhat hampered by the aforementioned poor technical performance, which causes the game’s frame rate to suffer in wide open sections. If you’re riding legendary Pokemon Miraidon (or Koraidon) at high speed, the world around you will become a muddy blur, and each leap will feel incredibly sluggish, as the game attempts to catch up with you. But while it’s certainly a frustration, the motions of exploration and the narrative do wonders to buoy the adventure regardless.

As in recent titles like Sword, Shield and Arceus, Violet and Scarlet continue the adoption of more ‘modern’ Pokemon gameplay features and exploration. This means Pokemon can be seen roaming freely in the world, and can be approached and caught at your whim. See a Pokemon you like? Go ahead, catch it. If you’re not vibing with that particular pal, you can walk away. The same goes for trainers.

While several previous games all maintained a traditional approach to battles, Violet and Scarlet changes things somewhat – all trainer battles are now optional. You’ll need to initiate them yourself – either because you need experience points, or because you want to spend more time in the game’s world. This is a minor tweak, but it streamlines things in a major way, and helps to ease many of franchise’s long-standing frustrations.

Exploration should be fun – and this generation of games understands that entirely. By stripping away many of the historic bugbears of Pokemon – a series of trainer battles that slowly whittle away your ability to keep exploring further – Violet and Scarlet clear a path for freeform enjoyment, as players work their way through a variety of challenges, picking them off at their own discretion.

You will still need to spend time grinding to level up Pokemon, particularly as you head towards tougher gyms and disadvantageous elemental match-ups, but being able to pick and choose your battles – in the wild, and with other trainers – makes the entire process less arduous. It means choices feel more player-driven and encouraging.

With a lack of hand-holding or a rigorous structure to follow, exploration becomes a complex and more engaging process. It’s up to you to assess your pathways and track your steps forward, noting when areas are filled with enemies of a higher level, and when you should retreat. Type match-ups can also dictate this journey, encouraging exploration into tougher areas where your Pokemon may have a tactical advantage.

Each stop along your path will contain a well-earned reward, from useful traversal skills, or the ability to catch new and stronger Pokemon. You can certainly spend time wandering, taking selfies, and admiring the vast landscape ahead of you – some of which looks genuinely stunning, despite frame rate and clipping issues – or you can investigate the strange, deeper events plaguing Paldea.

There’s a central mystery that will draw you closer into this tale – one that unfolds alongside you, at a pace where each story beat and narrative reveal can breathe.

In these beats, Pokemon Scarlet and Violet are also wildly, unexpectedly successful. While the plotlines of Pokemon tales have frequently lacked meaningful depth – the vast majority of games feature a surface-level narrative about being the very best Pokemon trainer – Violet goes much deeper, with a multi-layered tale buoyed by satisfying pay-offs, and this generation’s framing narrative.

By allowing players to embody a school-age Pokemon champion, and allowing them to be kids rather than a single-faceted storytelling tool, the overall narrative of the game is strengthened greatly. Scarlet and Violet are littered with characters you care deeply about, who each go on their own emotional narrative arc. It helps that the visual fidelity of Pokemon has evolved to the point where characters can actually show emotions, but the narrative itself has clearly matured, too.

In the war of Team Star, and the hopes of Arven, and the bright-eyed triumph of Nemona, you can feel the struggle of youth and acceptance – even amongst bombastic Pokemon battles and hunts for giant Titans. It’s a rare feat for a series that has so often prioritised simplicity and caricature in its depictions of emotional depth.

Your character is, in the end, just a kid struggling in a strange and often violent world. In recognising this via the framing narrative, Pokemon Violet presents a unique open-world tale where the stakes are charged with challenge and personal emotion. It’s easy to get invested in these characters, and to root for their cause, even as you’re being bombarded by Level 50+ Terastallized Pokemon in the wild, or attempting to take down massive roaming beasts.

The overarching narrative adds layers to the struggle, and informs the wild and adventurous quest that buoys this generation of Pokemon games. While Scarlet and Violet aren’t a complete reinvention of the formula, and technical performance issues certainly hold them back, they’re still an essential leap forward – both in storytelling and gameplay mechanics. New features and clever tweaks along the way make this adventure feel fresh and encouraging, in ways that past games haven’t. As a reinvigoration of the Pokemon formula, Scarlet and Violet are some of the best modern games in the long-running franchise.

A copy of Pokemon Violet for Nintendo Switch was provided and played for the purposes of this review. GamesHub has affiliate partnerships. These do not influence editorial content. GamesHub may earn a small percentage of commission for products purchased via affiliate links.