Let’s Build A Zoo is extremely weird, and that’s what makes it great

Let's Build A Zoo is a cutesy tycoon simulator which excels by the power of its idle-style gameplay.
Leah J. Williams 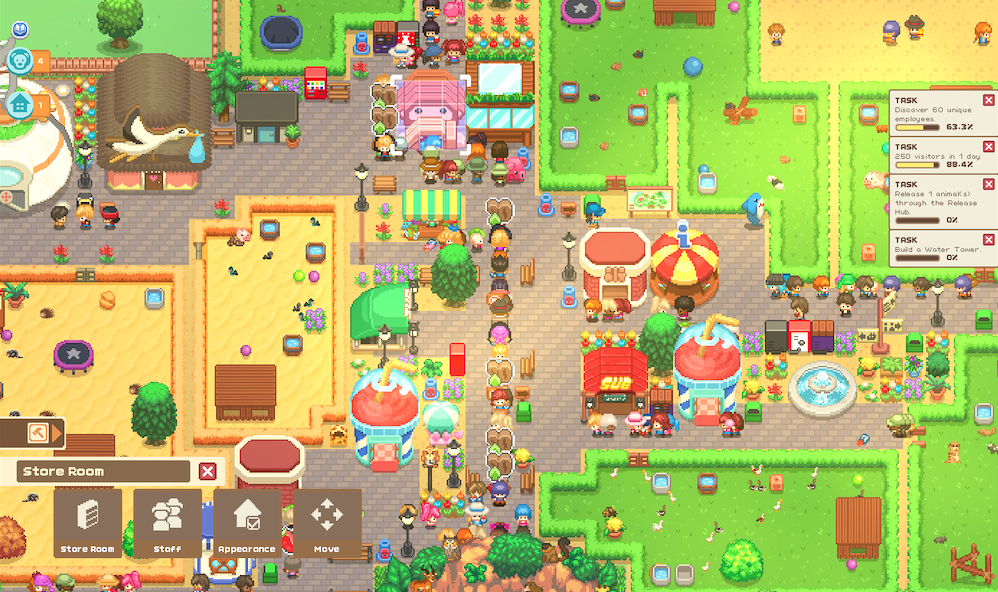 In Let’s Build A Zoo, your goal is simple: buy and trade animals to establish a thriving zoo. Like RollerCoaster Tycoon and Planet Zoo before it, the game is all about business management and ensuring your zoo survives financial ruin, while keeping up a hearty customer base. But in Let’s Build A Zoo, life is more complicated than it first appears. Sometimes life gets dark, and weird, and tough — and Let’s Build A Zoo knows how tempting the path of least resistance is.

See, on top of the game’s relatively familiar zoo-building mechanics, it also offers something unique: the power of moral choice. Choices are key to how the game operates, and they’ll dog your every move as you take over new lands and build your empire – events will pop up where you’ll need to make a decision, and the game won’t proceed until you pick one of two options.

Some are fairly innocuous, like choosing which pairs of animals to breed or how you lay out your zoo. Others depend solely on your personal judgement.

The further you play in the game, the more choices you’ll be presented with, and the more technologies you’ll unlock via your Research hub. Some let you expand your zoo’s energy output with clean alternatives, and some let you release your mature animals into the wild.

On the other hand, you can also take a different path by unlocking abattoirs and bacon factories that turn your animals into saleable meat. This saves you money and time, and keeps your zoo clean — but it also negatively impacts your moral standing in the game, and can lead to your park filling with angry protestors.

Moral choices guide your journey in Let’s Build A Zoo

The binary choice system in Let’s Build A Zoo is black-and-white for the most part, and often results in you choosing between killing animals or treating them kindly — but the consequences for choosing either path are dear. If you choose to be completely pure, your park’s income may suffer, and your pens will typically require more maintenance and care.

But if you choose to invest in immoral technologies and cut corners, like buying animals from the black market, your zoo will thrive and gain more guests.

The choice spices up gameplay in a way that most tycoon simulators don’t. It also adds a layer of complexity to the game’s idle chores, and makes every opening day at your zoo a wilder ride.

Sometimes you’re in the role of surveyor, with not much happening on a day-to-day basis. Other times, opportunities like black market deals and film productions land in your lap, forcing you to consider the consequences of harsh decisions. Do you hide a dead body amongst the animals in the pen, or risk the wrath of a mafia boss? Do you donate to a charity and raise your moral standing, or ignore it and save your money?

It’s easy to make a quick buck in Let’s Build A Zoo, but harder to reclaim the goodwill you’ve built if you make a wrong move. It means decisions have stakes, and your day-to-day can change wildly.

The more you play Let’s Build A Zoo, the weirder it gets

Let’s Build A Zoo‘s moral choices are interesting, because they don’t just stop after ‘painting animals’ or ‘choosing to increase pollution’. Instead, they go one further by asking players to consider the ramifications of using CRISPR gene-editing technologies to rewrite animal DNA.

The game’s cutesy pixel art style means the questions Let’s Build A Zoo asks aren’t too horrifying, but throughout gameplay, players are frequently asked to hybridise animals to increase patronage at their zoos. There’s apparently 300,000 hybrid animal combinations to make up, with players encouraged to collect them all like an uncanny game of Pokemon.

The more animals (and their colour variants) you add to your zoo, the more possibilities you open up for genetic experimentation.

It’s very cute seeing a rabbit with a crocodile tail, but it’s also very disturbing, despite the game playing it off as funny. The odd feature means Let’s Build A Zoo has a quieter, stranger face bubbling beneath its surface — one that occasionally rears up to take players by surprise.

While it’s mostly a game about building a fun little zoo, it can also be quite strange, and it’s this strangeness that makes every day loop compelling. You never know when the weirdness will ramp up, and means there’s every reason to play through each day, watching for change.

While the opening stages of Let’s Build A Zoo require a fair bit of investment, once your zoo is running smoothly, you can mostly sit back and guide the action like a benevolent god. Days pass by in minutes, with special guests and choices needing tending to throughout the day. Other than that, the choices and investments you make are your own.

It means if you’d prefer to play the game as an idle tycoon, it’s near-perfect for multitasking. By that I mean, if you’re one of the many busy adults who struggles to find time to game or disconnect from the real world, it’s great for playing in bite-sized pieces, or in the background of other work.

With minimal active input needed, it means you can focus on improving your zoo on a day-to-day basis, and identifying overall weak points in your strategy. The distance can give you a great perspective on what to focus on, and helps you create a largely self-run zoo.

While you can get more hands-on if that’s your jam, Let’s Build A Zoo works very well in idle or active play, with just enough challenge to keep your brain engaged, and plenty of unlockables that’ll keep you hooked. From zoo decorations that improve your score to new habitats and toys for your animals, there’s plenty to discover as you play.

The weirdness of the game does take some getting used to, but once you’re familiar with Let’s Build A Zoo‘s unique sense of humour, it helps open up a colourful and unique tycoon game. Its sense of fun is infectious, and there’s always something strange waiting for you around every corner. In Let’s Build a Zoo, the world is very, very weird — but that’s part of what makes it such an engaging game.