Embrace the strange: Why video games should be weirder

Brains are curious things, and they remember the weird more than the good.
Leah J. Williams 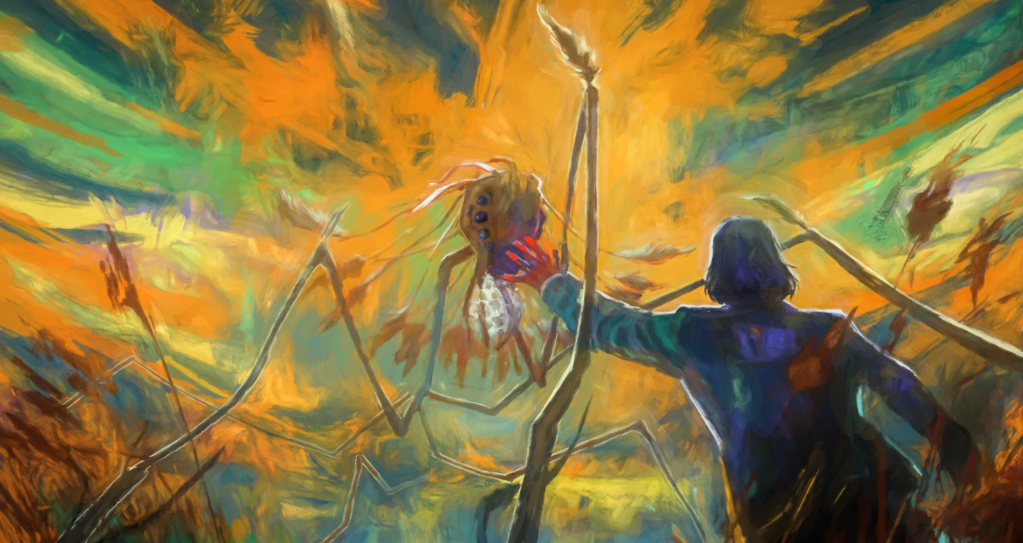 At the conclusion of ZA/UM’s Disco Elysium, protagonist Harry Du Bois meets a strange creature in a field. Known as the Insulindian Phasmid, this translucent creature towers over Harry. It’s a thing that shouldn’t exist, an otherworldly absurdity that exists on the barriers of the game’s world.

As you approach it, it leans down and shares a story filled with woe. It comforts you, and shares a quiet word for Harry.

‘The anthropods are in silent and meaningless awe of you,’ the Phasmid says. ‘Know that we are watching — when you’re tired, when the vision spins out of control. The insects will be looking on. Rooting for you. And when you fall we will come to raise you up, bud from you, banner-like, blossom from you and carry you apart in a sky funeral.’

In a game filled with powerful moments, it’s the one that stands out most. It’s quiet. It’s endearing. And it’s very, very weird — as more games should be.

Speaking on the topic of memory, Per Sederberg, a psychology professor at Ohio State University, once said our most memorable experiences are shaped by circumstances that arise from the familiar, but ‘violate some aspect’ of what we expect to happen.

‘Those peculiar experiences are the things that stand out, that make a more lasting memory.’

In the context of Disco Elysium, we expect a game that adheres to familiar patterns. We know what a role-playing game entails, and how point-and-click style adventures function. As we dive deeper into the game, we learn more about its largely grounded world; how Harry’s mind works, and how the city of Revachol is beholden to crime and civil disobedience.

We also learn how it corresponds to real life, and the struggles of living in an oppressive, relatively mundane society.

Our mind forms an image of what the game ‘should’ be. A set of expectations that the appearance of the Insulindian Phasmid shatters.

Disco Elysium is not a fantasy game. It’s a hard-boiled, grungy, crime fiction about a detective given to vices and losing control. The appearance of the Insulindian Phasmid is weird. It’s also very memorable, and strengthens the game’s critique of the world.

In the place between the game’s ‘real world’ and its ‘fantasy’, ZA/UM strengthens the narrative of Disco Elysium through absurdity. It makes a comment about the world; that it’s strange and unknowable, and that our pre-formed expectations are often wrong.

The Phasmid can also be considered symbolic of Harry’s willingness to change and accept the weirder parts of the world — but its sudden appearance and disappearance also works as a sharp, strange, and unfathomable shock for audiences. It helps them see the game with new eyes, and reconsider their preconceived notions about its world, and our own.

It’s a moment that stands out against the experiences of other modern games.

In recent years, mainstream blockbuster ‘AAA’ games have suffered from a strange period of ‘sameness’. The nature of the ever-moving games industry is that it must follow trends to stay profitable and engaging. When Fortnite rose to popularity in the late 2010s, the battle royale genre boomed.

Any significant innovations are often copied and reused, until games resemble each other so much that there’s rarely an unexpected moment between them.

When open world games became more technologically viable in the later 2000s, an increasing number of games adopted open-world environments. Now, this feature is synonymous with half the big game releases every year. They share the same style of skylines, the same tree-dotted landscapes, the same fetch-quests and mission structures. Not every game follows a strict formula — there are, of course, plenty that stand out — but it’s rare that these games create sharp, memorable moments that stick with you.

Wandering under a revolving sky is beautiful, but formulas are rarely broken. Most games adhere to invisible rules that guide players carefully and softly into new worlds and status quos.

It’s why weird games stand out so much.

They demand something more from their audience, a more visceral response. Disco Elysium stands out because it delves into the peculiar, using familiar tropes and narratives to lull people into a false sense of comfort, before removing that comfort entirely. In the process, the game makes a statement about real life.

The world is strange and uncanny, and the game reflects that peculiarity.

The same can be said for another earlier RPG title, which arguably resembles Disco Elysium in a lot of ways, and uses similar techniques to underpin its gameplay.

Looking for connection in the weird RPGs of the past

While The Urbz on Nintendo DS isn’t the most likely candidate for a theoretical breakdown, it understands the part weirdness plays in games all too well.

A spin-off of the popular franchise The Sims, The Urbz features players living an urban landscape, solving crimes, and attempting to escape the evils of society.

From the get-go, The Urbz is a weird game.

It revels in the absurd, taking joy in shattering the expectations that the Sims name brings. You go in expecting a traditional life simulator, and come away with a story that ends with stranding a capitalist overlord on an island filled with beasts.

Along the way, you play fiddle against a man who may be the devil in disguise. You get an albino alligator a job at a travelling circus. Sure, you have to make friends and look after your health just like in The Sims, but you also have to find out how to cure a vampire, summon ghosts and join streetwise cliques.

It’s a memorable game because it uses absurdity in meaningful ways. Like Disco Elysium, it relies on familiar tropes: it’s an exploration-style RPG filled with quests — but the weirdness amplifies a deeper commentary about the world.

Between activities like ghost-hunting and stand-up comedy is a surprisingly deft criticism on the evils of gentrification and late-stage capitalism. The appearance of the talking crocodile in the bayou speaks to how wildlife has been forced out of its natural habitat by city growth. In one mission, the consequences of greed are explored through the tale of two long-lost pirate brothers.

Even reality TV ‘vapidness’ is lampooned, with a wild quest where players travel to a deserted island to participate in a series of odd challenges.

Daddy Bigbucks, the game’s antagonist, is the personification of the modern capitalist mindset, and at one point uses a time machine to insert himself as an icon in history. This leads to a dystopian society in The Urbz where money is king, and a giant Daddy Bigbucks caricature looms over the city.

In defeating him, players make a stand against the overgrowth of capitalism, and help to free the game’s strange denizens from its tyranny.

It’s through the weirdness that the game makes an impact, and forces players to engage with a more complex narrative they may have otherwise avoided. The game is absurd, but wields weirdness as a way to draw players in.

Despite first appearances, the game is clever and nuanced, and the weirdness creates a subtlety and intrigue that stays with you.

It’s the strangeness that makes them memorable, and the peculiar that sparks thought. The appearance of the Insulindian Phasmid in Disco Elysium is a moment that lasts because it’s surprising. It’s weird, and it makes players think more deeply about the world and how they perceive it.

The appearance of talking alligators and time travel in The Urbz works similarly, presenting a unique commentary on real life by stretching it to absurd proportions. Its world is presented as a caricature, and the weirdness helps us process the game’s deeper themes and criticisms of society in a more palatable, interesting way.

At the end of the road, it’s these games we’ll remember most. The games that sparked thought, or surprised us. That’s the nature of the human brain — but it’s also the nature of games. They should be weirder. They should say more.

They should connect with us on deeper levels.

Whether by talking alligators or towering cryptids, modern games have the power to be more interactive, more intriguing, and more memorable by doing something very simple: getting weird.