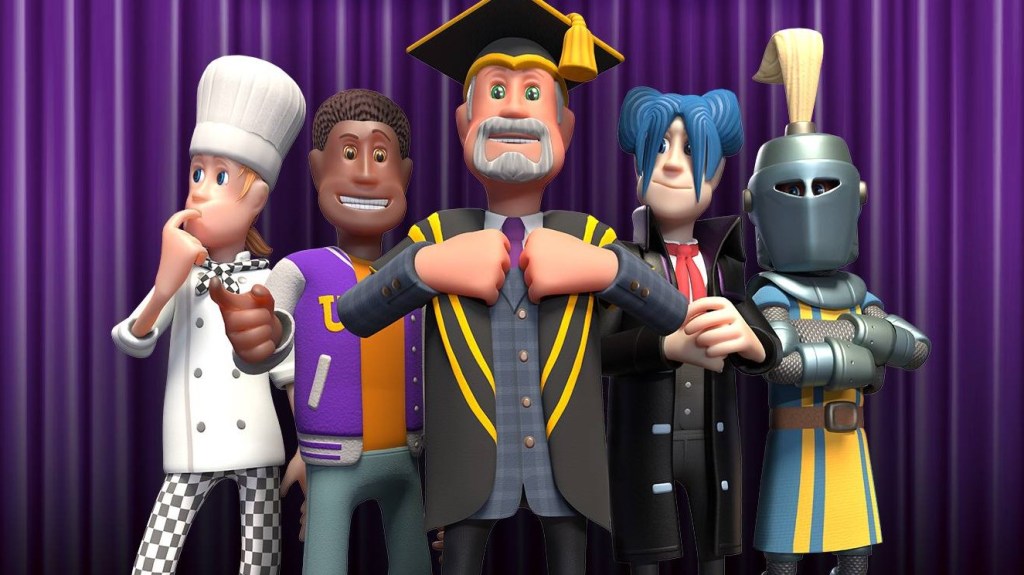 Two Point Hospital was a smash-hit success for Two Point Studios and Sega in 2018. In a void that demanded more robust management simulators, it managed to find an audience with newcomers as well as those who’d grown up playing the likes of RollerCoaster Tycoon and Theme Hospital. Two Point Campus takes everything that fans loved about Hospital, and effortlessly transposes it into a hearty, tongue-in-cheek university simulator.

Two Point Campus places you in the role of an unseen manager tasked with building and running the perfect university, with several unique campuses available to play through. Each has certain goals and ‘win’ conditions, and you must fulfil these goals to gain stars and prestige for your students. With each star comes greater challenge, and a need to earn more money and unlock new lessons, teachers, and features for the school year.

Unlike in Hospital, you’re primarily dealing with a set cohort of students, and attending to their needs across a number of months. As a manager, you must place the right amount of rooms for teachers, as well as other locales that will enhance your student’s learning and help them along to graduation.

In more challenging universities, your students will struggle with grades. To remedy this, you’ll build rooms for tutoring. If your staff are unhappy, a thriving staff room with fun furniture and activities will help keep the mood up. When your students feel the same way, you can throw parties and other celebrations. More than being good distractions, these events will actually aid your university’s overall happiness, and help to keep your grades high. Maintaining your cohort is a balancing act that requires finesse.

The gameplay loop in Campus is extremely involved, and far more relatable than the action of Hospital. Rather than the faceless, injured denizens that flit in and out of Hospital, the folks in Campus stick around. You can pick out favourite students – mine was a goth child known as Melancholia Reaper – and push them along on a learning journey. You’ll plan your school year around them, add in courses they might like, and keep the action thriving on their whims.

With a bigger focus on individual personalities, there’s more of an incentive to build better, more complex campuses to serve your student’s needs. It does get far trickier to monitor them as each university gets larger and more ambitious, but it adds a captivating personal layer to the game. It also aids in the sense of progression, which is built up as you meet each university goal.

In Two Point Hospital, it often felt like the game encouraged you to hop through each hospital with no clear goal in mind. It was progress for the sake of progress – and while the game was very engaging, it lacked a real drive for completion, and the loop quickly became repetitive.

In Two Point Campus, this progression system has been greatly altered, with each unique lesson and room unlocked only by completing star goals and advancing through the game’s campaign. While Hospital had a tendency towards sameness, each university in Campus feels distinct, and is guided by different objectives and schedules.

In Freshleigh Meadows, everything is fine and dandy. You’ll unlock the first campuses courses here – Robotics and Scientography – and learn the basics of the game. Your students are fairly smart, and they won’t need much help. But as you hit later campuses, more complex conundrums are introduced. New courses are unlocked – Gastronomy, Funny Business, Knight School, Potions – and new features become available, including tutoring for students and training for staff.

This rollout is very well-paced, with the game taking great steps to demystify the establishment process ahead of each new rollout. Rather than dropping you straight into a campus with no clue about what the giant pizza oven does, or how to take out invading ‘Blaggards’ from rival universities, each level in Two Point Campus begins with a measured explanation.

You’ll be introduced to a main character, and they’ll take you through the basics while explaining the story of each campus. In magic school ‘Spiffinmoore’ you’ll be introduced to an evil witch, who describes the many challenges she’ll throw your way. At Noblestead, a storied knight will tell you about the joys of jousting, and why your campus is being invaded by villains. These story elements then lead you into the starred goals for each campus, armed with all the knowledge you need to corral your students.

It means you never feel overwhelmed, despite the vast array of choices available in Two Point Campus.

Two Point Studios made a major statement with Two Point Hospital, effectively putting its very own stamp on the management simulator genre. It was easy to assume Campus would be more of the same – but while the game certainly shares a lot with its predecessor, it manages to carve out its own personality and appeal with its many clever tweaks to progression and pace, and the inclusion of student cohorts, rather than one-off patients.

In many regards, it’s also a more challenging experience than Hospital, with the game’s star goals requiring deep thinking about resource allocation and income, and some requiring you to appease massive groups of students on a shoestring budget. You will need willpower and patience to hit those coveted three stars on some campuses, but a need to stretch your imagination makes the action consistently compelling.

With debts mounting and student complaints at an all time high, your management skills will be sent to breaking point again, and again – making life in Two Point Campus dramatic at every turn. But that’s exactly why the game works so well. Challenge and satisfaction go hand-in-hand in this sim, making each choice anxiety-induced and rewarding in equal measure.

In that regard, Two Point Campus gets so much right about university life – and the management simulator genre.

The PC version of Two Point Campus was provided and played for the purposes of this review.

If you need help when you get your hands on the game, check out our general tips guide, as well as our guides for earning more Kudosh, and unlocking new areas like Spiffinmoore.

Bear and Breakfast is a surprisingly good mix of a B&B management game and a commentary on the human condition.