Tina Tina's Assault on Dragon Keep is a special game, and it deserves to be played by a bigger audience
Leah J. Williams 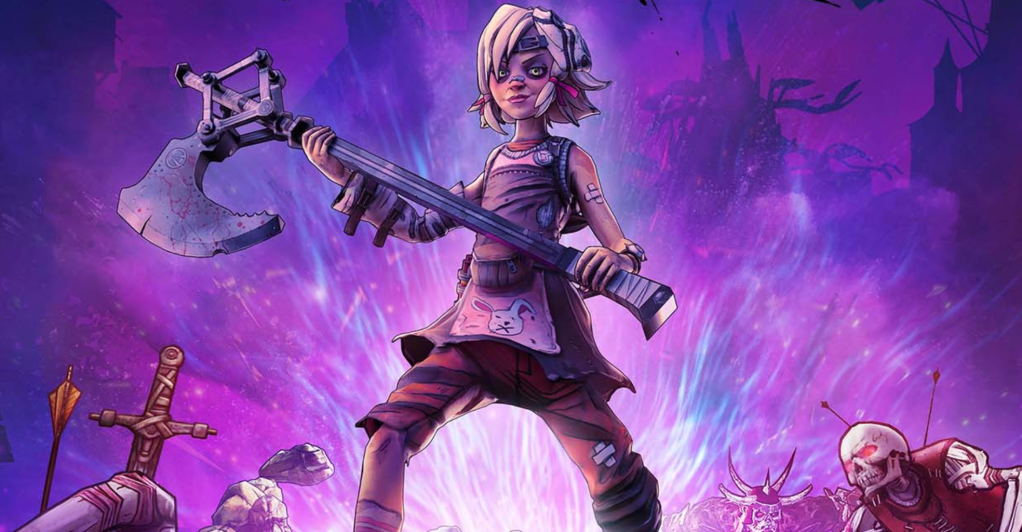 Tiny Tina’s Assault on Dragon Keep was first released as a piece of post-release downloadable content (DLC) for Borderlands 2 in 2013, and while it was an incredibly fun adventure, it did something very, very wrong: it completely blew Borderlands 2 out of the water. With fun characters, a deep story, a rocking soundtrack, and eye-popping locales, the DLC ended up being the best part of the entire Borderlands saga.

Now, it’s being re-released as a standalone chapter, currently available for free on the Epic Games Store. Nearly eight years on from the release of the game, it’s finally time to appreciate just how good Assault on Dragon Keep really is.

As a DLC chapter, it was surprisingly different from the rest of Borderlands 2, and transported players into a meta-fantasy narrative that technically took place in the imagination of beloved character Tiny Tina.

Rather than wandering through an apocalyptic wasteland filled with ‘psychos’ and hulking beasts, Assault on Dragon Keep let you explore a Dungeons & Dragons-themed universe filled with rainbows, walking skeletons and vine-filled worlds.

It leaned heavily into fantasy tropes, and featured lands themed after magical forests, castles, and deep dungeons filled with all manner of creatures. Many of these will return in Tiny Tina’s Wonderlands, an upcoming sequel set to riff off this adventure.

Its frolicking soundtrack was filled with mournful strings and moody beats that were at odds with the vibe of Borderlands 2— and there were always surprises around every corner.

But it wasn’t just the soundtrack or the locales that made Tiny Tina’s Assault on Dragon Keep special — it was how the story was told.

Rather than existing in the game world, Assault on Dragon Keep was a special chapter ‘created’ and narrated by Tiny Tina, in a way that gave her character more depth than she got in the base Borderlands 2 game.

In the context of the game, the events of the DLC are actually part of a Dungeons & Dragons game being played by the game’s main protagonists. Tina guides the action and determines what evils the characters face, with her narration pulling players deeper into the world.

The campaign serves as a way for her to express her creativity, but also gives an outlet for her grief over the loss of Roland, a vault hunter and father figure in Tina’s life. He’s murdered at the end of the Borderlands 2 campaign, with little time to mourn him between world-saving battles.

As skeletons appear on the battlefield and dragons roam the skies of Dragon Keep, Tina uses her story to work through her frustrations and grief in a way she can process. Dungeons & Dragons is one of Tina’s favourite games, so she uses that structure and fantasy world as a means to process her emotions.

In the same way video games are an escape for players, the meta-narrative of Assault on Dragon Keep lets Tina confront her grief in a ‘digital dollhouse’, as players work through her story and help her come to terms with loss.

It’s a human story, and one that’s skillfully told.

While Tiny Tina’s Assault on Dragon Keep appears to be a simple fantasy game on the surface, the underlying narrative is a genuinely beautiful look at how people cope with grief.

The Borderlands franchise isn’t typically known for its depth. While the game’s cast of characters are all wonderful in their own right, it really took Assault on Dragon Keep for the franchise’s true potential to be known.

Even as you run and gun, and fight your way through skeleton hoards, the DLC gives meaning and purpose to your journey. It shows how games, imagination, and escapism can be powerful, transformative tools.

As a diversion from the traditional Borderlands formula, it was a brave inclusion in Borderlands 2 — but the story it told was genuinely brilliant, and proved just how fun, creative, and impactful the series had the potential to be.

There’s magic and mayhem awaiting in Assault on Dragon Keep. Whether you’ve played it before or you missed it the first time, now’s the best time to pick up the dice and roll into Tiny Tina’s wonderful little world.