8 free game demos to check out during Steam Next Fest

Steam Next Fest is now live, and shining a spotlight on indie games from around the world.
Leah J. Williams 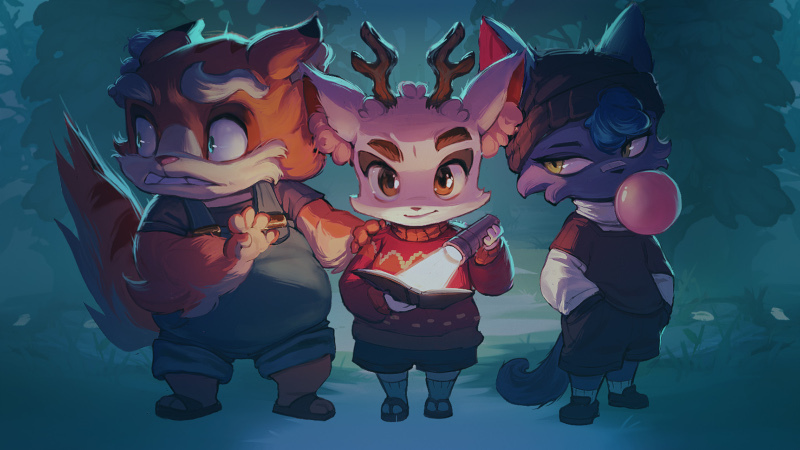 The latest Steam Next Fest has kicked off online, with the platform now spotlighting a range of exciting new indie games from around the world. There are plenty of demos to dive in with, and a deluge of titles to add to your wish list. You may not get to every game in the latest showcase but if you have the time, there’s a bundle of demos you should absolutely check out.

Here’s a few games to keep an eye on during the latest Steam Next Fest.

Conan Chop Chop is a wacky adaptation of the usually-serious Conan the Barbarian franchise coming from Australian developers Mighty Kingdom. In this rougelike, you’ll be flung into a cartoonish, ancient world and armed with a variety of monster slaying weapons. Your goal? To defeat the evil wizard Thoth-Amon before the end of the world comes about, despite your cute, noodle-y arms.

It’s rare that video game developers are given the scope to really experiment with beloved IP – and Conan Chop Chop looks like an example of exactly how wild a franchise can get when developers are given the creative reigns. This project started as a student project from Shannon Cross and Harrison Gibbins, and has quickly morphed into one of the weirdest, and cutest Australian-made games in development. You can check out the demo as part of this year’s Steam Next Fest.

McPixel 3 is a pixel-heavy action-adventure game that has a tongue firmly in its cheek. It looks downright bizarre, but when you consider that Devolver Digital is the publisher on this one, you’ll likely know what to expect: wild antics, a ridiculous plot, and plenty of explosions.

In this sequel to McPixel, you’ll play as a hapless hero who constantly finds themselves caught up in ridiculous, dangerous, and strange situations. You’ll need to help them out by – quote – ‘summoning a spider-billionaire, having a BBQ in his pants, punching a T-Rex into outer space, peeing into sports cars, and kicking Fork Parker in the balls.’

All this, and likely plenty more, awaits you in McPixel 3. If you’re not sure if this brand of madness is for you, the Steam Next Fest demo should give you a better idea of what exactly is going on in this game.

Neon White is a speedrunner’s dream: a fast-paced FPS where you can run, gun and parkour to your heart’s content. This game stars a pack of assassins hunting down demons in Heaven, and looks to be a wild cross between Paradise Killer and Mirror’s Edge. The aesthetic is absolutely wonderful, to start with. It’s all pure whites, idyllic blues, and shades of neon pink – the perfect colour palette for high-octane shoot-outs.

You’ll be facing off with metal crabs, eldritch beings and many winged abominations as you go soaring through each and every one of this game’s gorgeous, literally heavenly levels. The demo should give you a hefty taste of what this stylish shooter is all about.

Beacon Pines is a ‘cute and creepy’ adventure that stars a cast of fluffy characters who must work together to uncover the secrets hiding in a mysterious book. It appears to play out in hybrid fashion: you read from the book, and also act out its action as deer Luca. Along the way, you’ll be able to subtly manipulate the events of the game, choosing paths for Luca and helping them investigate the goings-on in the strange town of Beacon Pines.

There are multiple paths here, and a number of collectibles to find, making this storybook-like narrative one that can be played and replayed until you find the real truth lurking in the heart of Luca’s town. It’s been described as ‘Winnie the Pooh meets Twin Peaks‘, and that’s certainly a combination that needs to be seen to be believed. Like other games on the list, you can check out the demo for the duration of Steam Next Fest.

Oaken is a whimsical, nature-filled rogue-like that takes place on a board game-style arena. Here, players will use tactical, turn-based strategy to guide the inhabitants of the magical Great Oak to victory against strange denizens that threaten the peace of the land. You’ll need to collect cards and tokens, learn deep strategy, and gather allies for a hard-fought victory here.

The whole game looks extremely beautiful, and stars a cast of well-designed characters that follow along a winding narrative filled with choice. It’s a bit Gloomhaven and a bit Ori, with the tile-based action being very intriguing for fans of traditional board games. This could be the next big turn-based game, if the aesthetics and gameplay are anything to go by. You can dive in yourself with the limited time demo, or join the ongoing playtest via Steam.

Winter Ember is a stealth adventure that takes inspiration from classics like Thief and Dishonored, while putting a top-down spin on the genre. You play as Arthur, a former noble who has his entire world pulled out from under him when assassins break into his ancestral home and kill his entire family. In revenge, he sets out on a gloomy quest through Victorian-era streets as he attempts to hunt down his family’s killers.

GamesHub got an early preview of this title, and we were very impressed with the game’s sleek gameplay, shadowy art style and stealth mechanics that made hunting and hiding a real joy. This title from Australia’s Skymachine Studios (and published by Australia’s Blowfish Studios) is certainly one for fans of stealth or Hitman-type games to watch. The demo should be a meaty glimpse into what’s in store during this tale.

Coromon is a fresh take on the Pokemon-like monster catching genre. It features classic pixel art, extremely detailed battles, and plenty of sweet terrains to explore as players go on quests to hunt and catch every monster in the game’s gorgeous world. There’s a lot of familiarity in this title, largely because it wears its inspirations on its sleeve, but it should be a real joy for fans of Pokemon, or the wider monster catching genre, regardless.

According to the game’s official description, there will be some points of difference here, namely in the title’s ‘brain-twisting puzzles’, but for the most part, you know what to expect here. That said, homage games like this one aren’t typically as beautiful or detailed as Coromon, so it might prove to be a major challenger to the monster hunting crown yet. You can check out the game for yourself during Steam Next Fest.

RESTLESS SOUL is an understated, minimalist indie title that follows the adventures of a sweet ghost trying to return to the land of the living, despite being told it’s not possible. In your journey, you’ll encounter a number of other afterlife denizens – including a ghost dog! – and attempt to survive bullet hell battles, all while making friends and exploring strange new terrains.

The game’s art style is very intriguing, and part of what makes the game so eye-catching. It utilises a hybrid 2D-3D plane that evokes classic adventure titles like Pokemon and Earthbound, all in a shaded black-and-white fashion. It’s adorable, and even makes the evil skeletons look cute. With a dash of great humour and slick puzzles to complete, RESTLESS SOUL is a very intriguing title, and one you should certainly keep an eye on.

Steam Next Fest runs from 21 February to 28 February, with many of the demos shown being available for only a limited time. If something catches your eye, make sure to dive in as soon as you’ve got time.