Winter Ember is a sleek Aussie stealth game for goths

Winter Ember is a sleek new entry in the 'Victorian assassin' genre that's perfect for fans of Thief and Hitman.
Leah J. Williams 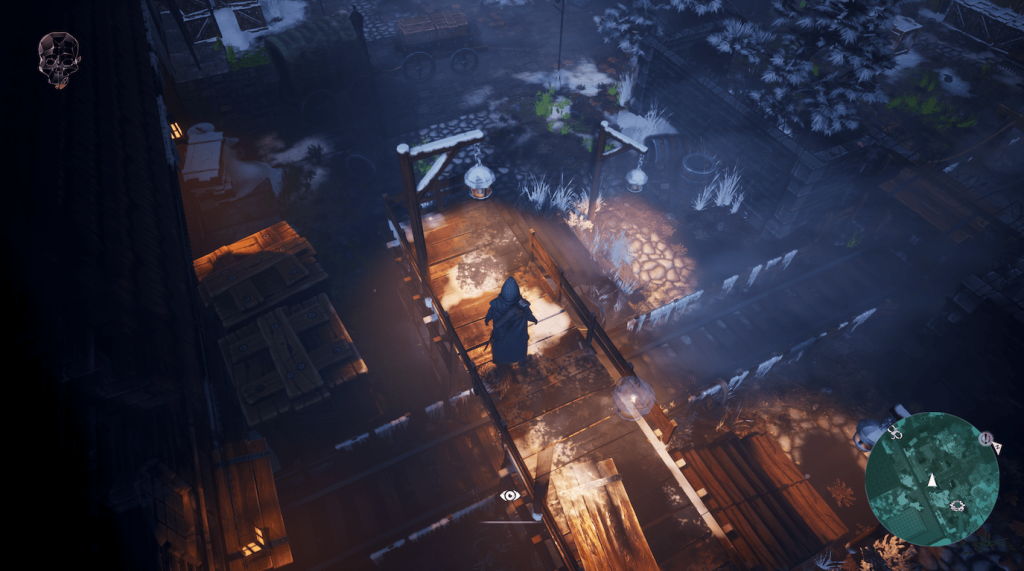 Winter Ember opens on a picturesque Victorian castle occupied by a family of nobles. Protagonist Arthur walks through a gilded hall with two women on his arms, and drunkenly laughs as his father takes him aside and asks him strange, cryptic questions about the future. Moments later, assassins invade the castle, killing everyone but Arthur, who’s left to question his reality – and why his family has been killed.

It’s a beautiful, horrifying scene, one rendered in a gorgeous anime style strongly reminiscent of the Ayami Kojima artwork and visual style that defined Castlevania. While the meat of the game takes place within a gloomy, top down, 3D-rendered world, Winter Ember‘s opening scenes are very striking, and set the tone for a bloody, murder-filled adventure.

Arthur’s been cast out of his family home and left faceless on the streets. There’s a conspiracy waging around him and his name, and it’s up to him to face down his enemies and confront the growing tide of darkness in the heart of his town.

Whether he survives will be up you and your stealth skills.

Winter Ember plays out like a top-down version of Hitman, infused with Thief-like stealth. You crawl your way through gloomy, Victorian streets filled with leaf-litter and detritus, and try to avoid the watchful gaze of the many guards that roam your path. If you time it right, you can track their path, sneak up behind them, and knock them out – or kill them. The choice to use lethal force is yours, although the demo was unclear if this decision will play into action later in the game.

If you’re careful, you can actually avoid guards entirely, sticking to the shadows or using ledges to skirt around the action. For the game demo I played through, I went with cold, bloody murder as my go-to technique – mostly because I found it difficult to time Arthur’s slower stealth movements well enough to sneak behind guards.

With enough time and patience, you can certainly master the game’s rhythm and focus on knockouts – but the easiest way to confront guards is usually running right at them, and using combat abilities like parries and strikes to take them down in a few, powerful blows.

If you’re lucky, you can also use Arthur’s arrows to stun or kill guards before you even enter their eye line. In the light, you can be seen by enemies – but if you blow out candles in your path and stick to the darkness, you can usually thwart guards from a distance, before they breach your hiding spot.

The top down gameplay means you can’t see or plan too far ahead, but if you stay alert you won’t often be surprised. Expect trouble, and you can usually buy time to slip into a side corridor or nearby trunk. Other times, you’ll need to draw your sword and enter into a rhythmic tête-à-tête where blows need to be timed well to avoid taking major damage.

Two guards are usually manageable – but once you’re facing multiple enemies, all bets are off. Arthur has a limited health bar, so stealth or avoidance is the best tactic for basic survival. That, or lock-picking your way into secluded rooms where goods can be looted, and you can hide away until danger passes.

Patience is a virtue, and Winter Ember certainly recognises that.

Living too far on the edge can cause problems down the line – something to keep in mind as you traipse through mansions, taverns and lonely roads. If you waste too much health, you’ll end up having to confront guards with just a single hit point left. I ended up in extremely dire circumstances during my preview of the game, largely because I’d been reckless with earlier battles and couldn’t find enough apples to heal.

When that happens, it’s time to get crafty and use the game’s shadowy environment to your advantage. Every problem can be solved, but they often require a fair bit of thinking to overcome. Sure, you can stab and slash your way down every pathway, but eventually you’ll need to face the consequences of your recklessness.

I came away from Winter Ember impressed by its sleek gameplay, stealth mechanics and cutscenes. While the demo didn’t reveal a particularly original game – it owes a lot to Thief, Dishonored, Desperados and the like – everything here is sleek, smooth and engaging.

The game does punish failure, in that whole areas need to be cleared before the game saves, but the ability to use multiple strategies means there’s every incentive to try again and again until you conquer each challenge. Guard spots you? Go around the back next time. Lockpick your way into a new room, and see if you can find some healing items that may help. There’s usually multiple options for completion, which means you’ll never be stuck for choices.

The action and story does seem fairly linear, but there’s enough scope for creativity and strategy to make Winter Ember feel encouraging at every turn. You may not survive your first few battles, but eventually you’ll slip into the game’s unique cadence and discover new tricks to claw your way to revenge in the game’s murky, gothic world.