Animal Crossing’s Cephalobot may be an alien lab experiment

Cephalobot is the strangest new villager in Animal Crossing. His appearance in Happy Home Paradise may give some clues to his origins.
Leah J. Williams 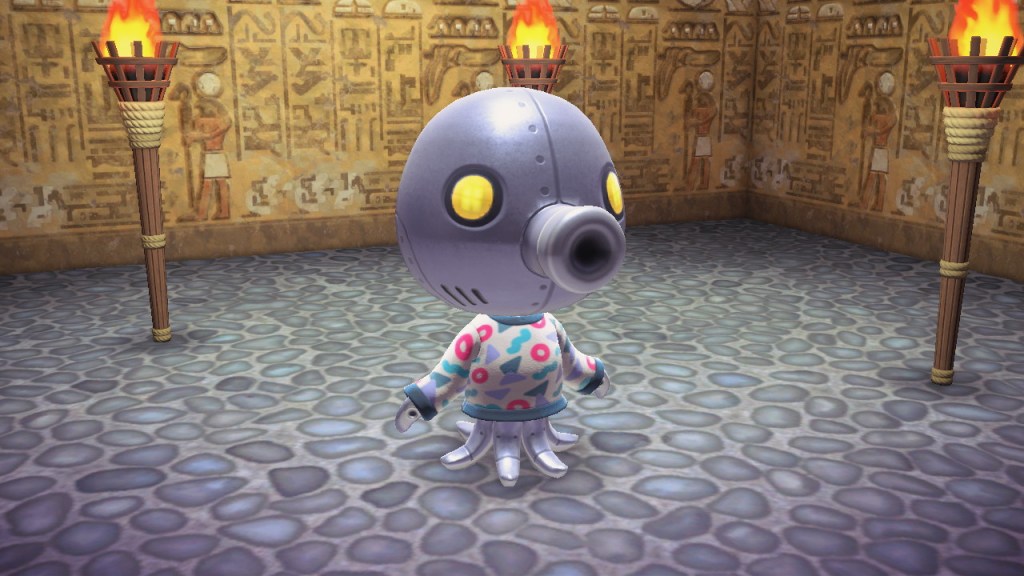 Animal Crossing: New Horizons is a wholesome game all about living on a lovely island, building your dream home, and making friends with the villagers that live nearby. One of the newest villagers to join the Animal Crossing roster in the game’s recent 2.0 update is Cephalobot, a robotic octopus who loves playing around. While he seems fairly innocent, Happy Home Paradise seems to imply something strange: that Cephalobot is actually an escaped alien lab experiment.

The existence of Animal Crossing’s robotic villagers has always been a bit strange. Fans have long wondered who created robotic bird Sprocket, frog Ribbot and crocodile Del. While most of the inhabitants of Animal Crossing‘s world are flesh-and-blood animals, there are a handful of robot companions that seem to have suspicious origins.

While Animal Crossing never outright says where the robot villagers come from or who made them, Happy Home Paradise includes a strange request which might illuminate more about how they were created.

If players use the Cephalobot amiibo card to invite the villager to build his dream home, he’ll request a creepy laboratory to live in. For every dream home you build, you’ll unlock new furniture, wallpaper and other items to help decorate it.

When you invite Cephalobot, his request unlocks items that include a massive turning gear, a space ship, a meteor rock, a mysterious red button that does nothing when you push it, some kind of electric chair, an alien test tube, a high tech monitor, and a control panel for a great machine.

His core wallpaper choices are sci-fi themed, with one being a high tech lab, and the other being a spaceship.

This is the place where Cephalobot most feels at home, his dream for achieving peace and stability. All he wants in the world is to be at home in a laboratory — likely because it’s the same place he originated from.

Taken together, it can easily be assumed that Cephalobot and his fellow robot villagers are alien lab experiments, who’ve somehow escaped and found their way to the thriving islands of Animal Crossing: New Horizons.

The second most damning bit of evidence can only be seen when Cephalobot turns his back.

At the top of his skull, he has a barcoded number printed: 083. Whether that means Cephalobot is the 83rd iteration of his species, or the 83rd overall robot-animal in Animal Crossing is unclear. What it does mean is that somebody manufactured and printed him.

Only four robot Animal Crossing villagers are currently known: Ribbot, Del, Sprocket and Cephalobot. But the number on Cephalobot’s head seems to imply there are far more animal robots wandering the islands of the game.

Whether they simply escaped from their assumed alien laboratory home or they’ve been somehow sent to Animal Crossing‘s islands to spy on players is currently unknown.

What is known is that the rabbit hole only gets deeper from here. With no clear answers, it appears the arrival of more robot villagers in Animal Crossing will remain a mystery.

If you spot one in your campsite, or on the beaches of Happy Home Paradise, stay wary. We don’t yet know their true intentions — or what strange hand birthed their creation.