The Out of Bounds installation shows that ACMI continues to adventure beyond the limits of what video game exhibits can, and should, include.
Goldie Bartlett 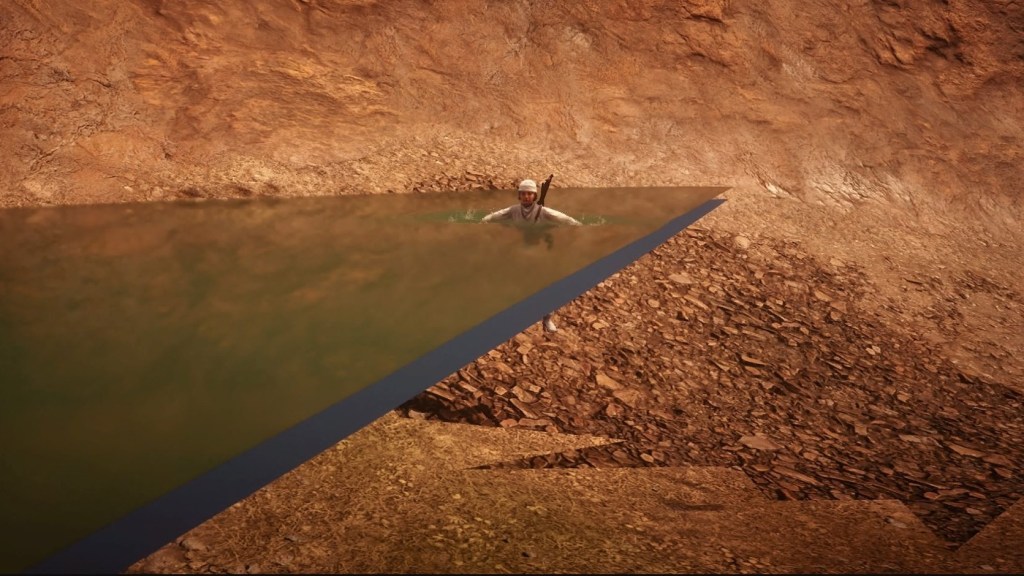 The latest addition to the impressive catalogue of games-focused exhibitions at the Australian Centre for the Moving Image (ACMI) is its new, five-month-long exhibition called Out of Bounds: Exploring the Limits of Videogames. A free exhibit, it features a quarter-hour-long documentary, alongside fascinating still images and a playable, complimentary video game by Melbourne developer Ian MacLarty, called Red Desert Render.

Established 20 years ago in the heart of Melbourne’s Fed Square, ACMI has been a bold attempt to curate modern visual culture – a cinema with a museum’s soul, and vice-versa. Big, bombastic commercial shows nestle next to unusual screen works. Curators have to constantly balance what visual culture becomes, with what the audiences respond to. What’s most exciting to me personally is their commitment to documenting and exploring the underground side of screen media, including the eccentricities of the modern, international video game scene.

Red Dead Redemption 2 (2018, Rockstar Games), is a popular action-adventure game set in a fictitious, sprawling version of South Western USA, at the turn of the century in 1899 – a time when the wildness of the west was just starting to yield to the tightening chains of newly-established government and class rule. It’s a tender, clever, generous and surprising game, as it takes the player through a sophisticated tragedy of epic proportions set in a richly populated and utterly stunning world.

The game launched an online multiplayer component, Red Dead Online, shortly after release, allowing gunslingers and flower pickers alike to play together. A group of game developer friends (Ian MacLarty, Kalonica Quigley, Andrew Brophy, and myself, Goldie Bartlett) ended up sharing with one another that we had each completely fallen in love with Red Dead Redemption 2, and in no time we were online every night, connected via voice chat as we roamed the expansive world, poking at its many toys and treasures.

We named our gang ‘The Grannies’, after Kalonica and I had both created older women characters for our online avatars, wanting to see what it was like to knock-about in our favourite world as powerful cowboy women. Over time, friends came and went, joining us for various adventures both within the world of RDR2, and eventually outside of it, too.

Andrew, another core granny, had read about a particular exploit that allowed players to ‘break out’ of the invisible confines of the map. Players needed to be holding their pistol, and then needed to sprint and jump at a particular point, on a particular nondescript cliff face. If they hit the exact right pixel of rocks at the exact time their character started to fall over, then the animation for standing back up would register the character as being on the other side of the rocks.

It was particularly tricky, as you also had to maneuver through the auto-slide over the lip of the rocks, and then stay still as the world tried to drag you back. The whole process took about 10 minutes after you’d made a good jump, which could itself take hundreds of tries.

But it was worth it. Once one of us was up and out, they’d lasso the others, pulling them through.

The first time we found ourselves outside the world was very special. Eerie, delicate, breathtakingly beautiful. It felt as if we could break it, and be respawned back into the main map at any point, and so each step was taken cautiously.

We headed due West into the great unknown, where environmental detail was stripped back every few minutes, until we eventually came across a long, irregular gash between solid ground and very blurry, low-resolution looking ground, like some kind of seam at the edge of the world.

Far below it, an expansive ocean glistened. We did some experiments to see whether the land over the ditch could hold us, but seeing as knives, arrows and cans rolled straight through it, we decided it would make for a risky jump. What happened after jumping wasn’t anything we’d have predicted.

Obsessed, we explored the outsides of the map for months. We discovered all sorts of stuff out there. As game developers, we likened it to peeking behind the curtains — it was fascinating to try to piece together how something as complex, dynamic and extraordinary as Red Dead Redemption 2 had been technically achieved. Out there seemed to be a mix of procedurally generated landscapes, and small developer experiments to stumble across.

Eventually, and inevitably, Rockstar patched the exploit, and we could no longer explore our favourite place. Luckily, we documented the best bits, sharing the photos and stories with Twitter, which were picked up by Kotaku, as well as by a Swedish radio program, P3 Spel.

From our stories, interviews and images, Out of Bounds was born. While it is an original exhibition designed by ACMI, it is both built upon and very deeply rooted in a 2020 installation called ‘The Grannies’.

Designed and directed by contemporary games curator & creative director, Marie Foulston, ‘The Grannies’ was originally commissioned to be shown at Somerset House in London for Now Play This Festival, and was intended to be a multichannel video installation shown in tandem with the responsive videogame work, Red Desert Render by Ian MacLarty.

In 2021 the installation was beautifully reshaped into a short documentary format which went on to debut at the prestigious IDFA, before being shown to packed cinemas in London, Milan, Rotterdam and Austin at various film festivals.

Now in 2022, ACMI has collaborated closely with Marie Foulston (et al.) to install the work as closely to its initial vision as possible, the way it was supposed to be experienced, with a few minor but welcome embellishments.

ACMI has previously given us extremely impactful curation, with video game exhibitions such as Code Breakers: Women in Games, and a permanent, 12-month rotating installation of the crème de la crème of indie games, (currently showing: Limbo, The Gardens Between, Heavenly Bodies, Nuts, Umurangi Generation and The Catacombs of Solaris Revisited) as part of its mainstay centrepiece, The Story of The Moving Image.

By curating Out of Bounds, ACMI has committed to reviving a significant work, very near to its original form, demonstrating that it is performing as a world-class contemporary arts museum capable of finding and sharing the quirky, experimental best of modern games culture.

Goldie Bartlett is an artist and game developer from Melbourne. She has a keen interest in indie games, particularly narrative-based games. Previously she has worked on games such as Wayward Strand, and for the Freeplay Independent Games Festival. She teaches creative practice at RMIT university in the games design degree.