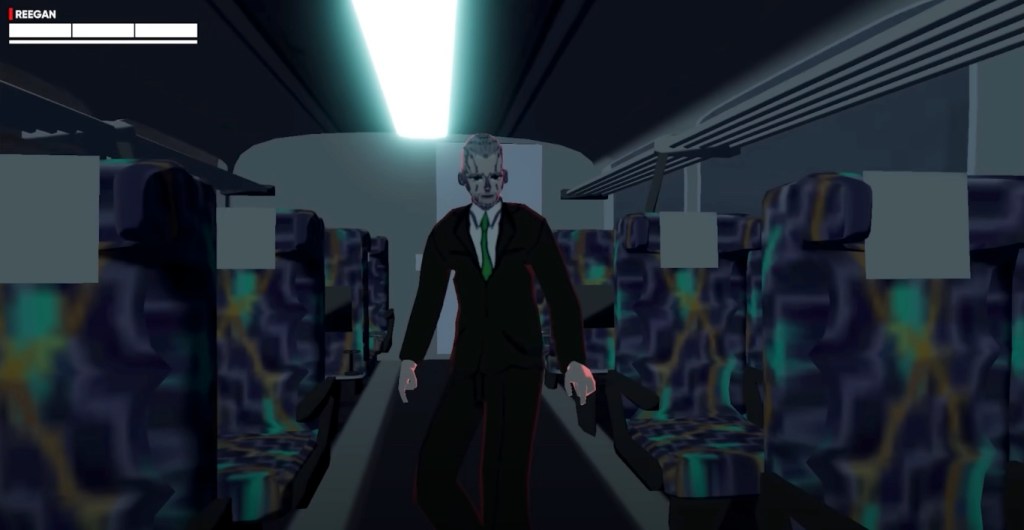 Umurangi Generation composer ThorHighHeels has hidden a major teaser for the next Origame Digital project within a YouTube video about mysterious horror games. At around the 15:52 mark in the linked video, a creepy train appears – described as The Last Train out of Narita.

The 3D model for the train is blocky and surreal, and glitches as the camera moves. Slowly, a pan reveals a man in a business suit – the lone occupant of the train. He gets up, runs along the carriage, later equipping a gun and crawling beneath seats to reach the next carriage.

Here, a lone figure on the ground is possessed by a mysterious shadow. Its eyes light up, and its body twists and burbles as it gets up in slow, jaunty motions. The sky turns red, and the businessman fires on the figure in frantic motions. The screen fades, and FIVESEVEN pops up on screen.

Read: On Hideo Kojima’s memes and ‘The Creative Gene’

This is assumed to be the name of the next game from Origame Digital. It appears to be a horror adventure of some kind, one that takes inspiration from the horror vaporwave aesthetic often seen in game jams or ‘low fi’ experimental titles. The dissonance created by the game’s glitches and blocky aesthetic makes it all the more terrifying, and we already want to see more.

The video, first spotted on Reddit and shared by Eurogamer, was later confirmed to be a legitimate first look at the next Origame title by Umurangi Generation developer, Naphtali Faulkner. He responded to the Reddit thread with a brief ‘hehe’ and later discussed the inspirations behind the upcoming game.

‘It is inspired by my beloveds Metal Gear, Silent Hill and Resident Evil,’ Faulkner explained in response to a query. At this stage, not much else is known about FiveSeven – making it all the more mysterious and tantalising. As work on the title continues, expect to hear more from the Origame team.