We preview an exclusive card from Magic: The Gathering's newest digital set, and speak to the Arena team about the release
Emily Spindler 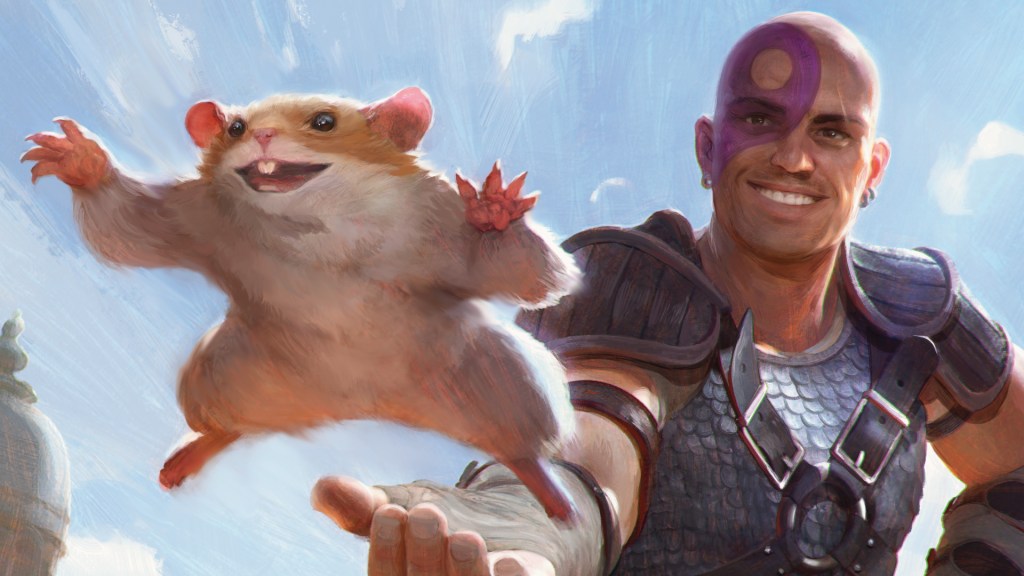 Feeling lucky? Magic: The Gathering’s upcoming digital-only set, Alchemy Horizons: Baldur’s Gate is coming to MTG Arena, and we have an exclusive preview of one of the cards set to launch on 7 July 2022: It’s called ‘Stroke of Luck’.

In case you’re not familiar, Alchemy is an MTG Arena digital-only format that includes all of the cards available in the Standard Magic card pool, as well digital exclusive mechanics and releases. It’s a quickly changing format that rebalances cards rather than banning them from play, to keep the game fresh and dynamic.

For one colourless mana and a swamp, players can cast the upcoming sorcery card Stroke of Luck to look through the top four cards in their library. They can then choose one of these and put them in their hand, along with any other cards that share the same name from those four cards. However, it comes with a cost; for each card they put into their hand, they lose one life.

With the ability to fetch multiple cards for two mana, Stroke of Luck could be part of your next tide-turning play in MTG Arena. The card plays similar to tutor spells like Assembly Hall, although with the added risk of drawing four cards at random. Played after scry cards or Scheming Symmetry, this could be a powerful move to set up for bigger plays.

The newest digital set takes tabletop Commander cards from Battle of Baldur’s Gate, as well as 81 new digital-only cards, and brings them to MTG Arena for Alchemy, Historic, and Historic Brawl game modes. New mechanics including Specialise, Double Team, and Boon will also be introduced alongside the new set, with Wizards of the Coast promising that these will ‘bring the flavour’ of Commander Legends: Battle for Baldur’s Gate to the game.

It’ll be interesting to see what this new set adds to the mix in Alchemy, which debuted in Arena in December and brings the opportunity for ever-evolving changes and new mechanics that can’t be recreated in tabletop MTG.

GamesHub also got the chance to speak with Megan O’Malley, the Communications Manager for the MTG Arena Team regarding the upcoming release.

GamesHub: We’d love to know a bit about the move from paper sets, which are so concrete, to digital where there’s the ability to rebalance and update where necessary. What made the team decide to begin creating digital exclusive sets?

Megan O’Malley: It’s something we spent a lot of time thinking about.  We learned that our goal to provide fast, fun Magic also needed to contend with a play rate where each day, we see millions of matches played on MTG Arena. To keep things exciting and fresh for our players, we needed a way to provide more content, more regularly than our Standard set releases could provide.

We also felt there was a lot of potential with digital cards, both with our ability to rebalance them in response to the current meta, or to use mechanics and abilities that might be untenable when playing tabletop. And thus, Alchemy was born as a way for us to provide an ever-evolving play mode for our fans.

What’s been the most fun aspect of creating cards that couldn’t exist on paper, with digital specific abilities like ‘perpetual’?

It’s opened a whole new world of ‘what if’s’ when it comes to designing Magic cards and mechanics. We get to explore ideas that would be too cumbersome, complex, or downright impossible to manage outside of the digital space. At the same time, we also want players to feel like they’re still playing the Magic they know and love. It’s a balancing act, and some of the most fun has been discovering and iterating on what kind of cards and abilities fit into the ‘not tabletop but still Magic‘ space.

Why should players be just as excited for this set as opposed to standard legal ones?

Why not both? Alchemy, Historic, and other “digital only” aspects of MTG Arena are an additive experience that we plan to support perpetually (pun intended) alongside our “true-to-tabletop” Standard set releases. With Alchemy Horizons: Baldur’s Gate, we’re also providing everything that excites players about a full Standard set release – including new cards and mechanics, events like player draft and sealed, and a set mastery.

What’s the reception to the Alchemy play mode been like since its release?

Overall, we’re happy with what we’re seeing with Alchemy. We know there is an audience for it, and we enjoy seeing how many of them have engaged with the new metagames and strategies that Alchemy provides. Even though digital-only cards and digital-only rebalances was surprising to a lot of long-term fans, we’re confident in our ability to provide a dynamic digital format alongside a true-to-tabletop experience.

What do you hope players enjoy most about Alchemy Horizons: Baldur’s Gate?

Playing, of course! In all seriousness, we hope players enjoy the way we’ve adapted Commander Legends: Battle for Baldur’s Gate for MTG Arena. It was a big undertaking to find a way we could support a set designed for a multiplayer-format, but we wanted to give our players as much of the Baldur’s Gate experience as possible, in a way that made sense for 1v1 digital play.

Alchemy Horizons: Baldur’s Gate is available for preorder now, with Limited and Constructed events running on release from 7 July 2022. You can view further details about Arena, and the new set on the Magic: The Gathering website.