Magic: The Gathering is celebrating Pride Month with a new Secret Lair card drop, 'Pride Across the Multiverse’.
Emily Spindler 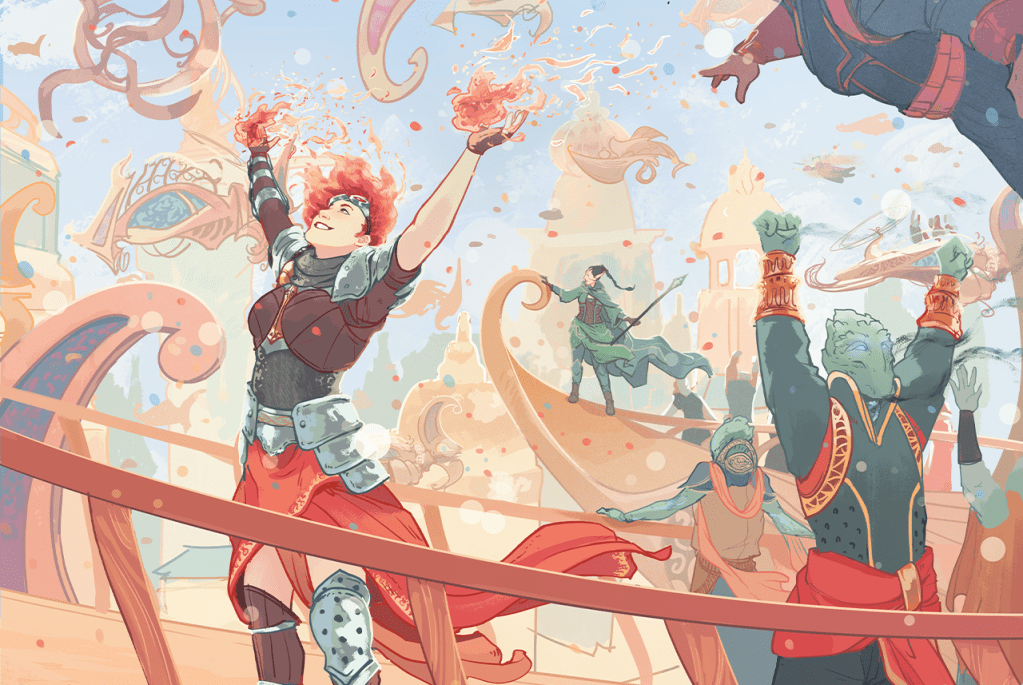 With only a few weeks until Pride Month begins, Wizards of the Coast is getting into the celebratory mood with a new Secret Lair alternate card drop for Magic: The Gathering, ‘Pride Across the Multiverse’. The eight card set features all-new art by queer artists, and depicts a world in which beloved Magic characters celebrate their queerness.

Sub-brand Secret Lair began in late 2019, as a means for Wizards of the Coast to launch limited-time drops of collectible Magic cards, many of which featured unique artwork, art styles and sometimes very left-of-field themes. To date there have been 107 drops, the limited nature of the cards making them a collector’s dream.

With a renewed spotlight on LGBTQIA+ characters within the Magic universe, let’s take a look at some of the queer characters and stories spotlighted throughout the history of the TCG.

Alesha, Who Smiles at Death

Heralded as Magic’s first canonically trans character, Alesha, Who Smiles at Death was first released in 2015 as part of the Fate Reforged expansion. Alesha was revealed to be trans in a short story published by Wizards of the Coast, The Truth of Names, where she earns her name through battle before becoming the Khan of the Mardu Horde.

Alesha’s story puts her exploits and achievements at the forefront, woven in with a tale of choosing her own path. While her tale is understated, she has garnered a lot of love from the queer Magic community since her release, and is one of the characters immortalised in the ‘Pride Across the Multiverse’ drop.

In the drop announcement, Wizards of the Coast highlighted that her new art shows her ‘guiding the next generation’ as an elder. This ties into the theme of queer elders being there to protect, teach and guide young people in the community. Queer, Two Spirit Indigenous artist Winona Nelson created Alesha’s new look.

Chandra is perhaps the most controversial on this list, in part due to the controversy surrounding her relationship with Nissa, and sexuality in the novel War of the Spark: Forsaken. Wizards of the Coast had teased the fiery planeswalker’s relationship with fellow planeswalker Nissa for some time, then unceremoniously ended it, with the novel explaining that Chandra’s previous crushes had been ‘mostly the brawny (and decidedly male) types’ like Gideon, and that her feelings for Nissa were a one-off in the past.

There was a public backlash from the community, and Magic issued an apology for ‘straight-washing’ her. Over the course of the Midnight Hunt and Crimson Vow expansions, Wizards of the Coast made good on their renewed promise that Chandra would ‘explore her relationships with fire and passion as she adventures across the multiverse.’ With a new love interest in Adeline, Chandra’s queerness is no longer a question, and she now features in the new Collective Voyage card art at a pride parade.

Ral Zarek and Tomik Vrona receive their fairytale wedding in the ‘Pride Across the Multiverse’ card, Savor The Moment. The two rival guild masters are depicted by queer artist Kieran Yanner, in a gorgeous moment inspired by their relationship, which was detailed in the 2019 novels War of the Spark: Ravnica and The Gathering Storm.

In previous card art for the characters, Ral and Tomik can be seen wearing pieces of each other’s robes in a subtle nod to their relationship.

Niko Aris first made their debut in the 2020 Kaldheim expansion as a non-binary planeswalker and gifted athlete. Chris Mooney, a game designer on the Magic: The Gathering team, said they ‘wanted to tell a story that could express the shared experience of non-binary people without focusing on their gender identity.’

While Niko’s gender identity is a key part of them, their story expands far beyond this, with the blue-aligned planeswalker questioning fate and destiny as they battled to save Kaldheim from near-certain war and chaos. Mooney said the concept of questioning what’s destined resonated with them as a non-binary person, and they hoped to bring this to the depiction of Niko’s story.

Huatli is a warrior-poet and planeswalker from the realm of Ixalan, and a recent addition to this list. Coinciding with the announcement of the Secret Lair drop, the short story Note for a Stranger was released. It introduced the relationship between Huatli and Saheeli alongside their new card.

In a sweet, meet-cute style tale, Huatli finds love through the exchange of fumbling and flirtatious notes on a bulletin board with a stranger, culminating in the reveal that the writer on the other end was, in fact, an old friend. The art on the new card is by artist Peo Michie, and is a refreshing look at unabashed sapphic romance.

Magic: The Gathering has frequently taken chances to spotlight more diverse characters in its cards and storylines lately – and it’s truly excellent to see.

While there has been reports that the Pride Across the Multiverse drop is region-locked for people hoping to purchase it in LATAM countries, there’s hope Wizards of the Coast doing more to reflect its LGBTQIA+ community in the game will help to create visible, meaningful change. An entire set focused on celebrating queer stories is a very welcome addition to the long-running franchise.

‘Pride Across the Multiverse’ is available until the end of June, with half of the proceeds going to The Trevor Project, a suicide prevention and crisis intervention organisation for LGBTQIA+ youth.